IntroductionMemory is a required to store programs and data. One bit memory is required to store one binary number i.e. ( either 0 or 1 ). The data is stored in binary form (ie.0’s and 1’s ). Storage Devices is the most essential elements in a computer system. The internal storage holds the data while processing. When saving anything on a computer, it may ask you for a storage location, which is the area in which you would like to save the information. By default, most information is saved to your computer hard drive.

The information which we store in the computer is of two types.

(i) Processor MemoryThese are register and cache memory which are in the processor and are used as temporary location where processing is performed.RegisterIt is small memory and is the fastest memory.Cache Memory

Main memory can be classified as Primary MemoryPrimary Memory, also known as main storage, is the area in a computer in which data is stored for quick access by the computer’s processor. It is a computer system’s volatile storage mechanism. This includes several types of memory, such as the processor cache and system ROM. However, in most cases, primary memory refers to system RAM.

RAM: Random Access MemoryRAM, or random access memory, consists of one or more memory modules that temporarily store data while a computer is running. RAM is Volatile Memory, meaning it is erased when the power is turned off. Therefore, each time you start up your computer, the operating system must be loaded from secondary memory (such as a hard drive) into the primary memory, or RAM. Similarly, whenever you launch an application on your computer, it is loaded into RAM. The two main types of RAM are,

ROM – Read Only MemoryROM is memory containing hardwired instructions that the computer uses when it boots up, before the system software loads. ROM stores the program required to initially boot the computer. It only allows reading. The data stored on ROM cannot be changed. ROM is Non-Volatile Memory. It can keep the contents without even the power source. The types of ROM include,

Cache MemoryCache memory is a type of memory used to hold frequently used data. Cache memory is relatively small but very fast. Most web browsers use a cache to load regularly viewed web pages fast. The most important type of cache memory is the CPU cache. Once the data is stored in cache, it can be used by accessing the cached copy rather than recomputing the original data.

Secondary MemorySecondary memory or secondary storage or Auxillary memory is the slowest and cheapest form of memory. It cannot be processed directly by the CPU. It must first be copied into primary storage (also known as RAM). Secondary memory devices include,

Based on the method of accessing information secondary storage device are classified as.

(i) Sequential Access Storage: The data stored can be accessed sequentially only. To understand this let its consider example of Music tape Cassate. To access the first song we can listen it as soon as it is played , the access time for first song is minimum (say 1 sec.) but if we have to listen fifth song then also we have to listen to the preceding songs and then only the 5th song can be listen. Hence acess time will be more as compared to the first case.Hence in sequential access storage, depending on the memory located to be accessed, its access time varies.Example: Magnetic Tape. 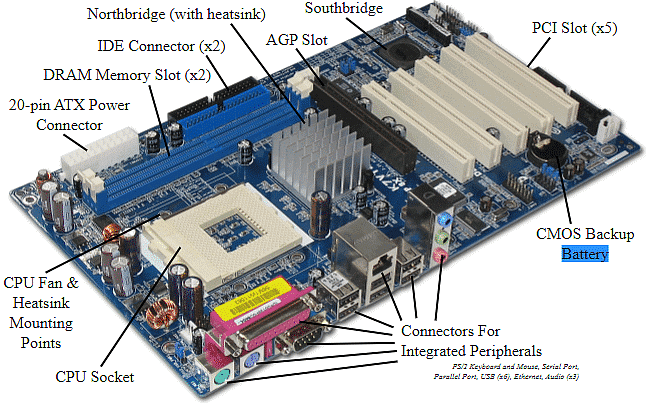 Each motherboard has a collection of chips and controllers known as the chipset. When new motherboards are developed, they often use new chipsets. The good news is that these boards are typically more efficient and faster than their predecessors. The bad news is that older component soften do not work with new chipsets. Of course, if you are planning on upgrading multiple components, it may be more cost-effective to just buy a new computer.