Semiconductor memories are of two types: The general procedure of static memory interfacing with 8086 is briefly described as follows:

As a good and efficient interfacing practice, the address map of the system should be continuous as far as possible, i.e. there should be no windows in the map. A memory location should have a single address corresponding to it, i.e. absolute decoding should be preferred, and minimum hardware should be used for decoding. In a number of cases, linear decoding may be used to minimise the required hardware.

Question 1:The semiconductor memories are organised as __________ dimension(s) of array of memory locations.
Explanation

The semiconductor memories are organised as two dimensions of an array which consists of rows and columns.

Let us now consider a few example problems on memory interfacing with 8086.Problem 1.Interface two 4K x 8 EPROMS and two 4K x 8 RAM chips with 8086. Select suitable maps.Solution. We know that, after reset, the IP and CS are initialised to form address FFFFOH. Hence, this address must lie in the EPROM. The address of RAM may be selected anywhere in the 1MB address space of 8086, but we will select the RAM address such that the address map of the system is continuous, as shown in Table.

Problem 2.Design an interface between 8086 CPU and two chips of 16K x 8 EPROM and two chips of 32K x 8 RAM. Select the starting address of EPROM suitably. The RAM address must start at 00000H.Solution. The last address in the map of 8086 is FFFFFH. After resetting, the processor starts from FFFFOH. Hence this address must lie in the address range of EPROM. Figure below shows the interfacing diagram, and Table below shows complete map of the system. It is better not to use a decoder to implement the above map because it is not continuous, i.e. there is some unused address space between the last RAM address (0FFFFH) and the first EPROM address F8000H). Hence the logic is implemented using logic gates, as shown below. 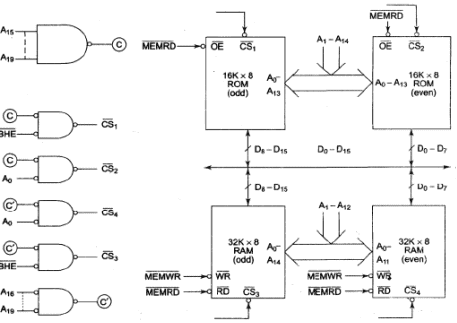 The implementation of the above map is shown in below using the same technique as in Problem 1 and Problem 2. All the address, data and control signals are assumed to be readily available. 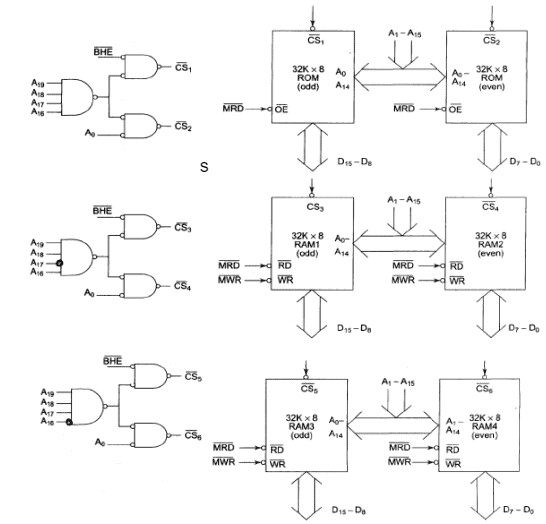