Between 1856-1863, Mendel conducted the hybridization experiments on the garden peas. During that period, he chose some distinct characteristics of the peas and conducted some cross-pollination/ artificial pollination on the pea lines that showed stable trait inheritance and underwent continuous self-pollination. Such pea lines are called true-breeding pea lines.

Why was Pea Plant Selected for Mendel’s Experiments?

He selected a pea plant for his experiments:

Mendel conducted 2 main experiments to determine the laws of inheritance. These experiments were:

While experimenting, Mendel found that certain factors were always being transferred down to the offspring in a stable way. Those factors are now called genes i.e. genes can be called the units of inheritance.

Mendel experimented on a pea plant and considered 7 main contrasting traits in the plants. Then, he conducted both the experiments to determine the aforementioned inheritance laws. A brief explanation of the two experiments is given below.

In this experiment, Mendel took two pea plants of opposite traits (one short and one tall) and crossed them. He found the first generation offsprings were tall and called it F1 progeny. Then he crossed F1 progeny and obtained both tall and short plants in the ratio 3:1. To know more about this experiment, visit Monohybrid Cross – Inheritance Of One Gene.Mendel even conducted this experiment with other contrasting traits like green peas vs yellow peas, round vs wrinkled, etc. In all the cases, he found that the results were similar. From this, he formulated the laws of Segregation And Dominance.

In a dihybrid cross experiment, Mendel considered two traits, each having two alleles. He crossed wrinkled-green seed and round-yellow seeds and observed that all the first generation progeny (F1 progeny) were round-yellow. This meant that dominant traits were the round shape and yellow colour.He then self-pollinated the F1 progeny and obtained 4 different traits wrinkled-yellow, round-yellow, wrinkled-green seeds and round-green in the ratio 9:3:3:1.Check Dihybrid Cross and Inheritance of Two Genes to know more about this cross. 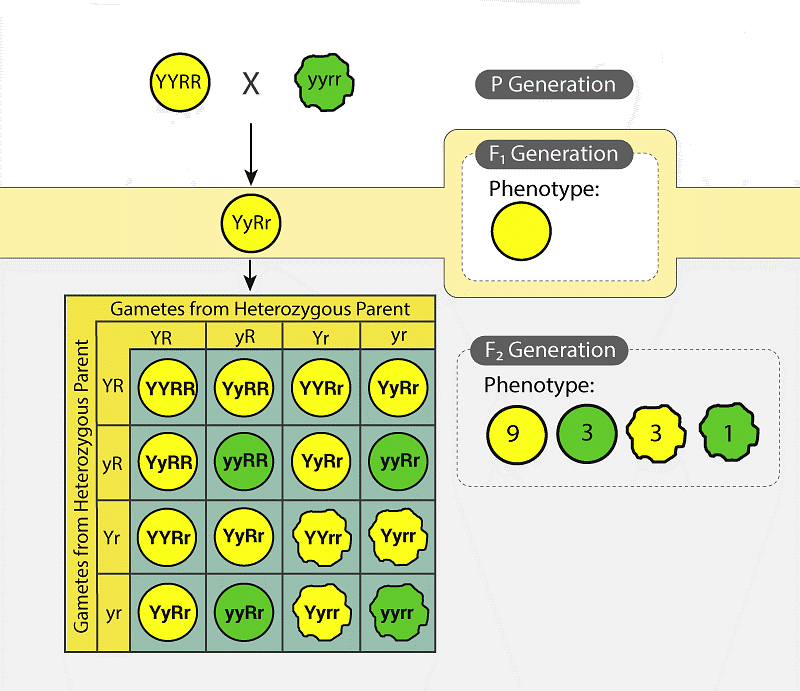 After conducting for other traits, the results were found to be similar. From this experiment, Mendel formulated his second law of inheritance i.e law of Independent Assortment.

The two experiments lead to the formulation of Mendel’s laws known as laws of inheritance which are:

This is also called Mendel’s first law of inheritance. According to the law of dominance, hybrid offsprings will only inherit the dominant trait in the phenotype. The alleles that are suppressed are called as the recessive traits while the alleles that determine the trait are known as the dormant traits.

The law of segregation states that during the production of gametes, two copies of each hereditary factor segregate so that offspring acquire one factor from each parent. In other words, allele (alternative form of the gene) pairs segregate during the formation of gamete and re-unite randomly during fertilization. This is also known as Mendel’s third law of inheritance.

Also known as Mendel’s second law of inheritance, the law of independent assortment states that a pair of trait segregates independently of another pair during gamete formation. As the individual heredity factors assort independently, different traits get equal opportunity to occur together.

Why was the pea plant used in Mendel’s experiments? Mendel picked pea plant in his experiments because the pea plant has different observable traits. It can be grown easily in large numbers and its reproduction can be manipulated. Also, pea has both male and female reproductive organs, so they can self-pollinate as well as cross-pollinate.