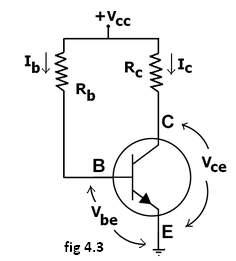 This form of biasing is also called base bias. In the fig 4.3 shown, the single power source (for example, a battery) is used for both collector and base of a transistor, although separate batteries can also be used.

In the given circuit,

Since the equation is independent of current ICR, dIB//dICR =0  and the stability factor is given by the equation….. reduces to

Since β is a large quantity, this is very poor biasing circuit. Therefore in practice the circuit is not used for biasing.

For a given transistor, Vbe does not vary significantly during use. As VCC is of fixed value, on selection of RB, the base current IB is fixed. Therefore this type is called fixed bias type of circuit.

The emitter feedback bias circuit is shown in the fig 4.4. The fixed bias circuit is modified by attaching an external resistor to the emitter. This resistor introduces negative feedback that stabilizes the Q-point. From Kirchhoff's voltage law, the voltage across the base resistor is 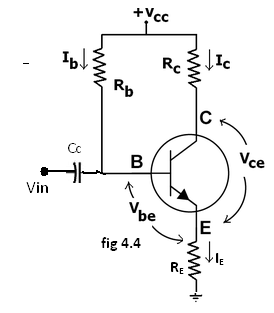 From Ohm's law, the base current is

Similarly, if the transistor is replaced by another, there may be a change in IC (corresponding to change in β-value, for example). By similar process as above, the change is neglected and operating point kept stable.

For the given circuit,

The circuit has the tendency to stabilize operating point against changes in temperature and β-value.

COLLECTOR TO BASE BIAS  OR COLLECTOR FEED-BACK BIAS 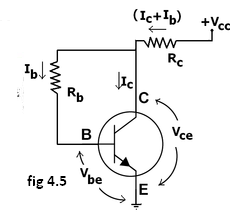 This configuration shown in fig 4.5 employs negative feedback to prevent thermal runaway and stabilize the operating point. In this form of biasing, the base resistor Rb is connected to the collector instead of connecting it to the DC source VCC. So any thermal runaway will induce a voltage drop across the RC resistor that will throttle the transistor's base current.

From Kirchhoff's voltage law, the voltage

across the base resistor Rb is

From Ohm's law, the base current

Hence, the base current Ib is

which is the case when

Usage: The feedback also decreases the input impedance of the amplifier as seen from the base, which can be advantageous. Due to the gain reduction from feedback, this biasing form is used only when the trade-off for stability is warranted. 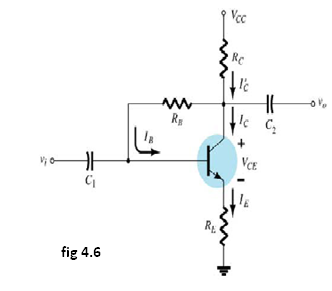 The voltage divider as shown in the fig 4.7 is formed using external resistors R1 and R2. The voltage across R2 forward biases the emitter junction. By proper selection of resistors R1 and R2, the operating point of the transistor can be made independent of β. In this circuit, the voltage divider holds the base voltage fixed independent of base current provided the divider current is large compared to the base current. However, even with a fixed base voltage, collector current varies with temperature (for example) so an emitter resistor is added to stabilize the Q-point, similar to the above circuits with emitter resistor. 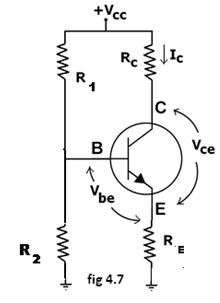 In this circuit the base voltage is given by:

For the given circuit,

Let the current in resistor R1 is I1 and this is divided into two parts – current through base and resistor R2. Since the base current is very small, so for all practical purposes it is assumed that I1 also flows through R2, so we have

Applying KVL in the circuit, we have 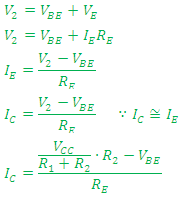 It is apparent from above expression that the collector current is independent of transistor parameters thus the stability is excellent. In all practical cases the value of Vbe is quite small in comparison to the V2, so it can be ignored in the above expression. Hence, the collector current is almost independent of the transistor parameters thus this arrangement provides excellent stability.

Stability factor for such circuit arrangement is given by: 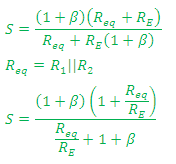 If Req/RE is very small as compared to 1, it can be ignored in the above expression thus we have

which is excellent since it is the smallest possible value for the stability. In actual practice the value of stability factor is around 8-10, since Req/RE cannot be ignored as compared to 1.

which is approximately the case if

where R1 || R2 denotes the equivalent resistance of R1 and R2 connected in parallel.

Usage: The circuit's stability and merits as above make it widely used for linear circuits.

The various biasing circuits considered use some type of negative feedback to stabilize the operation point. Also, diodes, thermistors and sensistors can be used to compensate for variations in current.