is the best number to use. The delay can be expressed as a function of N (assuming parasitic delay of each stage is same as p )as:

is the best number we know that

. Solving for r we obtain 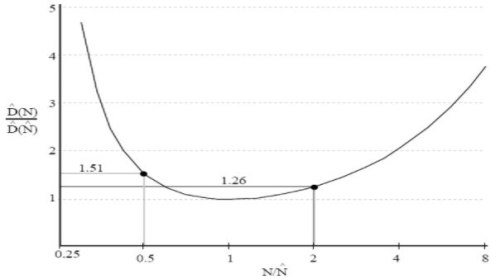 Fig 24.11: The relative delay compared to the best possible, as a function of the relative error in the number of stages used

Fig 24.21 shows a dynamic latch: when the clock signal φ is HIGH, and its complement Fig 24.21: A dynamic latch with input d and output q. The clock bundle is

Fig 24.31 shows one stage of a ripple-carry chain in an adder. The stage accepts carry

in and delivers a carry out in inverted form on

. The inputs g and

come from the two bits to be summed at this stage. The signal g is HIGH if this stage generates a new carry, forcing

is LOW if this stage kills incoming carries, forcing

The total logical effort of this gate is

. The logical effort per input for 24.4 Dynamic Muller C-elementFig 24.41 shows an inverting dynamic Muller C-element with two inputs. Although this gate is rarely seen in designs for synchronous systems, it is a staple of asynchronous system design. The behavior of the gate is as follows: When both inputs are HIGH, the output goes LOW; when both inputs go LOW, the output goes HIGH. In other conditions, the output retains its previous value - the C-element thus retains state. The total logical effort of this gate is 4, divided between the two inputs. 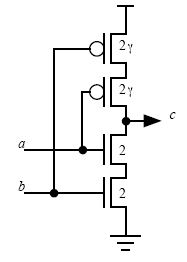 If we try to use a signal and an inverter for the complimentary signal then we get unequal delay between two signals. So we use N-stages and adjust the sizing such that we get two complementary signals with equal delay. 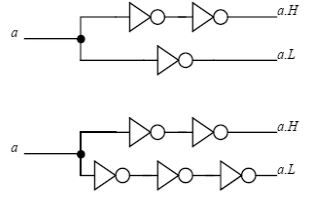 The design of a fork starts out with a known load on the output legs and known total input capacitance. As shown in Fig 24.52, we shall call the two output capacitances

. The combined total load driven we will call

. The total input capacitance for the fork we shall call

, and can thereby describe the electrical effort for the fork as a whole to be

The design of a fork is a balancing act. Either leg of the fork can be made faster by reducing its electrical effort, which is done by giving it wider transistors for its amplifier. Doing so, however, takes input current away from the other leg of the fork and will inevitably make it slower. A fixed value of

provides, in effect, only a certain total width of transistor material to distribute between the first stages of the two legs; putting wider transistors in one leg requires putting narrower transistors in the other leg. The task of designing a minimum delay fork is really the task of allocating the available transistor width set by

to the input stages of the two legs.