When two bodies are charged by friction, they acquire the same magnitude of charge. Furthermore, the bodies retain these excess charges even when they are separated from each other.Note: Charging involves transformation of mass.

Step 1: Consider the two spheres above made with a metal. Since metal is a good conductor, it is a good choice for this experiment.

Step 2: We get a rod that is negatively charged and we put it next to the two spheres. The rod is shown on the right in green. The lines inside the rod represent negative charges.

Electrons in sphere B are repelled by the rod and move to sphere A to create an excessive charge called also net charge. This situation creates also a net charge in sphere B.We say that a charge has been induced on the spheres.

Step 3: We can separate the spheres while the rod is still there.

Step 4: Finally, we can remove the rod completely.

The spheres will keep their charges and this is what we mean by charging by induction. The charges on the spheres are equal and opposite.

Note: That the charges are equal because for each single electron that goes to A and therefore creates a single negative net charge, it leaves B with a single positive charge.

In our example above, let’s assume 3 electrons went to A creating a situation where B has a positive charge with 3 protons. Keep in mind that spheres A and B could have billions and billions of electrons. The reason that sphere A is charged now is because it has an excess of 3 electrons although this is a small charge. By the same token, the reason sphere B is charged is because it has 3 more protons now than electrons.Charging by induction and grounding Use only 1 sphere this time and induce a charge again with a charged rod. Then, put your finger on the side where negative charge is induced i.e. away from the rod.

When you touch the metal with your finger, electrons leave the sphere by means of your finger and enter the ground through your body. 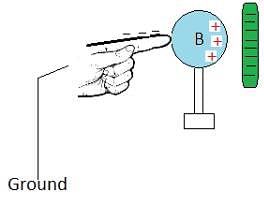 When we allow charges or electricity to leave a conductor by touching it, we call it grounding the conductor.

Note: That neutral body does not imply a ‘charge-less’ body. It means a microscopic balance of –ve and +ve charge in the body.

The document Methods of Charging: Friction, Conduction & Induction Notes | Study Physics For JEE - JEE is a part of the JEE Course Physics For JEE.
All you need of JEE at this link: JEE
Join Course