1. Years’ Purchase of Average Profit Method:
Under this method, average profit of the last few years is multiplied by one or more number of years in order to ascertain the value of goodwill of the firm. How many years’ profit should be taken for calculating average and the said average should be multiplied by how many number of years — both depend on the opinions of the parties concerned. The average profit which is multiplied by the number of years for ascertaining the value of goodwill is known as Years Purchase. It is also called Purchase of Past Profit Method or Average Profit Basis Method.

The following additional information about Banerjee & Co. were also supplied:

(a) A casual income of Rs. 3,000 was included in the profit of 2000 which can never be expected in future.
(b) Profit of 2001 was reduced by Rs. 1,000 as a result of an extraordinary loss by fire.
(c) After acquisition of the business, Majumdar & Co. has to pay insurance premium amounting to Rs. 1,000 which was not paid by Banerjee & Co.
(d) S. Majumdar, the proprietor of Majumdar & Co., was employed in a firm at a monthly salary of Rs. 1,000 p.m. The business of Banerjee & Co. was managed by a salaried manager who was paid a monthly salary of Rs. 4,000. Now, Mr. Majumdar decides to manage the firm after replacing the manager.

Compute the value of Goodwill on the basis of 3 years’ purchase of the average profit for the last 4 years.

This method is the modified version of Years’ Purchase of Average Profit Method. Under this method, each and every year’s profit should be multiplied by the respective number of weights, e.g. 1, 2, 3 etc., in order to find out the value of product which is again to be divided by the total number of weights for ascertaining the weighted average profit. Therefore, the weighted average profit is multiplied by the years’ purchase in order to ascertain the value of goodwill. This method is particularly applicable where the trend of profit is rising.

XYZ Co. Ltd. intends to purchase the business of ABC Co. Ltd. Goodwill for this purpose is agreed to be valued at 3 years’ purchase of the weighted average profits of the past four years.

The appropriate weights to be used:

The profits for these years were:

The following information were available:

(a) On 1.9.1999 a major repair was made in respect of a Plant at a cost of Rs. 8,000 and this was charged to revenue. The said sum is agreed to be capitalized for Goodwill calculation subject to adjustment of depreciation of 10% p.a. on Diminishing Balance Method.
(b) The Closing Stock for the year 2000 was overvalued by Rs. 3,000.
(c) To cover the Management cost an annual charge of Rs. 10,000 should be made for the purpose of Goodwill valuation.

You are asked to compute the value of Goodwill of the company.

Under this method, the value of the entire business is determined on the basis of normal profit. Goodwill is taken as the difference between the Value of the Business minus Net Tangible Assets.

Under this method, the following steps should be taken into consideration for ascertaining the amount of goodwill:

The profits of the past four years (before providing for taxation) were:

Compute the value of Goodwill of the company assuming that the normal rate of return for this type of company is 10%. Income Tax is payable @ 50% on the above profits.

From the following Balance Sheet and other necessary information of P. Ltd. for the year ended 31.12.2001, compute the value of Goodwill by the application of Capitalisation Method:

Profits earned before providing for taxation have been:

Assume that Income-Tax @ 50% has been payable on these profits. Dividends have been distributed from the profits of the first three years @ 10% and for those of the next two years @ 15% on the Paid-up Capital. Under this method, Super-profit (excess of actual profit over normal profit) is being considered as the value of annuity over a certain number of years and, for this purpose, compound interest is calculated at a certain respective percentage. The present value of the said annuity will be the value of goodwill.

I = Rate of Interest

From the following particulars, compute the value of goodwill under Annuity Method:

This method for calculating goodwill depends on:

(i) Normal rate of return of the representative firms;

The following steps should carefully be followed for calculating the value of Goodwill under Super- Profit Method:

(b) Ascertain the amount of Normal Profit (i.e. Percentage of Normal Rate of Return on Capital/Average Capital Employed);

The following particulars are available in respect of the business carried on by Mr. R. N. Mitra:

Compute the value of Goodwill of the business on the basis of 3 years’ purchase of super-profit taking average of last four years.\

The Assets were revalued as: 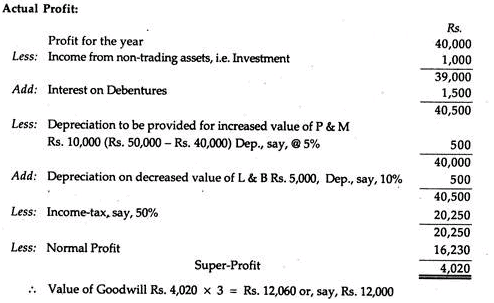 From the following information, compute the Goodwill of the firm XYZ Co. Ltd. on the basis of four years’ purchase of the average Super-Profit on a 10% yield basis:

As per the Articles of Association of this private company, its Directors have declared and paid dividends to its members in the month of December each year out of the profit of the related year. The cost of the Goodwill to the company was Rs. 5, 00,000. Capital employed at the beginning of the year 2006 was Rs. 19, 30,000 including the cost of Goodwill and balance in Profit and Loss Account at the same time was Rs. 60,000. 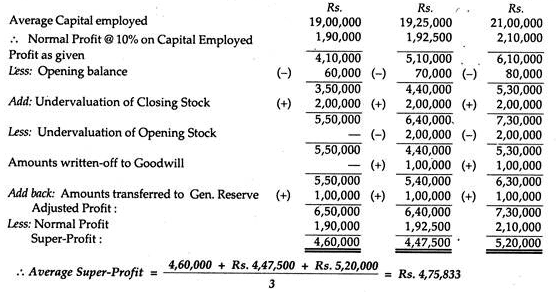 Under the method, we are to consider super-profit in place of ordinary profit against the normal rate of return.

The same is calculated as:

Compute the value of goodwill.

Under this method, the distribution of profit which is related to super-profit may vary from year to year. In other words, in order to find out the value of goodwill, sliding scale valuation may be considered relating to super-pr8fits of an enterprise.

Compute the value of Goodwill on the basis of Sliding Scale Method.