o A mortar-aggregate system is considered to be at meso-level.o Cracking stages:   1. Bond cracks at

≅ 0.75 0.80.   3. Unstable crack propagation   4. Failurewhere  fc' = reference strength, which is usually obtained from uniaxial testing (compression) of standard size cylinders.→  Stress-strain behavior of concrete     o Stress-strain (σ −ε ) relation is used to determine material property, such as the modulus of elasticity (Young’s modulus), E, strength, and failure strain as a basis for analysis and design purposes.    o For concrete, since it is mainly used in compression, the modulus of elasticity, Ec , is determined from compressive stress-strain curves that are generally obtained from uniaxial compressive tests.→  Deflection and failure behavior as affected by microcracking     o Model study:    Deformation and fracture of a concrete model:

o Interface elements are used to study the influence of matrix-inclusion that is bond effect and particle-interaction phenomena in modeling.    o Precise analysis should account for the influence of nonhomogeneity, models of interfacial behavior, and include recognition of interface debonding and resulting progressive fracture.    o Sophisticated analysis shows that bond failure initiates due to compression-shear and that the failure behavior is controlled by microcracking due to direct tensile stresses and splitting of concrete.      o Two debonding modes:   1. Compression-shear (including pure shear) failure at interface   2. Tensile-shear (including pure tension) debondingCompression-shear strengtho The compression-shear strength of concrete is based on:1. Chemical bond which is an attraction between the mortar and aggregate constituents.2. Mechanical bond which results from the interlocking of the mortar and the aggregate in the irregularities of the aggregate surfaces.→ Uniaxial compression  o Inelastic volume increase → “dilatancy”  o The behavior is related to microcracking. where wc = the density of concrete. For normal weight concrete,

for lightweight concrete, where fct = splitting tensile strength.→ Short-time response in compressive loading testsFrom the uniaxially compressive testing results, the short-time response curves consist of an initial relatively straight-line portion and a curve-to-level portion that contains the maximum stress. The curve descends after the maximum stress is reached. Different ways of testing result in different characteristics of the after-peak behavior.Maximum strain for normal density concrete generally ranges from 0.002 to 0.003 and from 0.003 to 0.0035 for lightweight concrete. In general, the modulus of elasticity calculated from the initial straight portion of the stress-strain curve is larger when the strength of the concrete is higher.→Testing conditions, such as specimen boundary condition and loading rate, influence stress-strain curve characteristics.→ Long-time response in compressive loading tests(a) The influence of creep deformation → concrete deforms under sustained load.(b) The influence of fatigue → the fatigue strength of concrete depends not only on the static strength of concrete but also on moisture condition, age, and rate and range of loading.→ Several observations on the stress-strain curves of concrete of various strengths by the Portland Cement Association (PCA):(a) The lower the strength of concrete, the higher the failure strain.(b) The length of the initial relatively linear portion increases with the increase in the compressive strength of concrete.(c) There is a marked reduction in ductility with increased strength.o Biaxial stress state→ Effect of microcracking ƒ Biaxial stress state is considered with principal stresses acting only in two directions.→ When concrete is compressed in biaxial stress state:1. The observed compressive strength increases.2. The tensile ductility is greater than that under unaxial compression. For compression-tension region ductility decreases with the increase in tension.3. Elastic limit is shifted up.4. As the failure point is approached, an increase in volume occurs as the compressive stress continues to increase. In biaxial compression volumetric strains increase.5. Failure modes depend on various stress combinations.o Biaxial loading where σy , σx , σxy = stresses in the local coordinate systems,

(b) In the global coordinate systems: → In normal strength concrete fracture occurs by progressive cracking, starting at the interface and resulting in separation between the two constituents.σ1 , σ2 , σ3 ≠ 0 → triaxial condition,σ1 < 0 and σ2 < 0 and σ3 < 0 → triaxial compression,σ1 > 0 and σ2 > 0 and σ3 > 0 → triaxial tension,{σ1 < 0 and σ2 > 0 and σ3 > 0} or {σ1 > 0 and σ2 < 0 and σ3 < 0} or{σ1 > 0 and σ2 < 0 and σ3 > 0} or {σ1 < 0 and σ2 > 0 and σ3 < 0} or{σ1 > 0 and σ2 > 0 and σ3 < 0} or {σ1 < 0 and σ2 < 0 and σ3 > 0}→ triaxial shear.o  Nilson (1997) reported several observations regarding the triaxial strength of concrete:“1. In a state of equal triaxial compression, concrete strength may be an order of magnitude larger than the uniaxial compressive strength.2. For equal biaxial compression combined with a smaller value of compression in the third direction, a strength increase greater than 20 percent can be expected.3. For stress states including compression combined with tension in at least one other direction, the intermediate principal stress is of little consequence, and the compressive strength can be predicted safely…”o  Failure of concrete in triaxial stress state1. The failure surface in triaxial stress state is described by a hydro-axis and deviatoric sections. Intersection of the failure surface with σ3 = 0 plane gives σ1 - σ2 biaxial failure curve. Other representations involve failure description in deviatoric and hydrostatic planes.2. Under high confining stress the possibility of bond cracking is reduced; and failure mode shifts from cleavage to crushing of the cement paste.3. Concrete is a brittle material which fails through brittle cleavage (splitting) at the interfaces and in mortar except for high triaxial compression where shear slippage occurs resulting in a ductile behavior.o The strength of concrete under combined stress cannot be determined analytically, in a precise manner, mainly due to the following reasons:1. The existence of cracks in concrete makes it become nonhomogeneous and non-isotropic. Traditional approach using continuum mechanics cannot be directly applied to develop the analytical expression of strength of concrete in this circumstance. Currently the prediction of concrete strength under combined stress relies on experimental results.2. In many situations it is not possible to determine all the acting stresses and their directions in concrete structures.→  Concrete confinement by transverse and longitudinal reinforcemento Different confinement scenarios that may be used in practice are illustrated below: 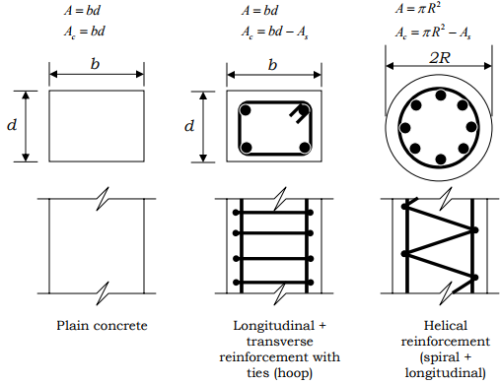 → The factor 0.85 is used for vertically cast members for the effects of:–– bleeding in long columns (strength variation along the axis)–– eccentricity effects–– size effects→ The effect of the spiral is comparable to the specimens subjected to lateral pressure f2 in which case → The lateral confining pressure may be expressed approximately in terms of the tension in spiral reinforcement.

in tension at failure)Since the contribution of the lateral pressure to the ultimate axial load = 4.1 f2 An .it turns out that

Validity of this equation has been verified by the tests where the coefficient ranged from 1.7 to 2.9.→ When P0 is reached, the shell of concrete outside the core will fail and the load capacity of the column will reduce. But due to confinement no buckling will occur in the longitudinal steel.→ ACI recommends that the contribution of the transverse reinforcement to the strength should be at least equal to the contribution of the concrete cover.