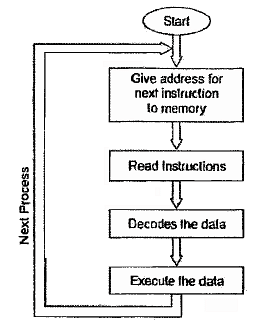 Note:Among the five flags, the AC flag is used internally for BCD arithmetic; the instruction set does not include any conditional jump instruction based on the AC flag. 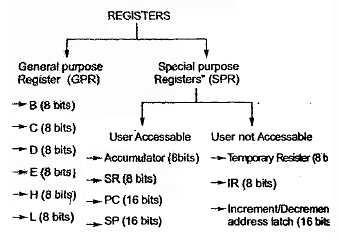 – A memory location in R/W memory is called “STACK”. It is a part of RAM, which is used’ during Subroutines, PUSH and POP operations. _

Data Bus:It carries ‘data’, in binary form, between microprocessor and other external units, such as memory.

8085 Pin DescriptionHere we will discuss only few important pins of the microprocessor,

HOLD (Input)HOLD; indicates that another Master is requesting the use of the Address and Data Buses. The CPU, upon receiving the Hold request, will relinquish the use of buses as soon as the completion of the current machine cycle. Internal processing can continue. The processor can regain the buses only after the Hold is removed. When the Hold is acknowledged, the Address, Data, RD, WR, and IO/M lines are 3stated.

INTR (Input)Interrupt Request; is used as a general purpose interrupt. It is sampled only during the next to the last clock cycle of the instruction If it is active the Program Counter (PC) will be inhibited from incrementing and an INTA will be issued. During this cycle a RESTART or CALL instruction an be inserted to jump to the interrupt service routine.

The INTR is enabled and disabled by software, it is disabled by Reset and immediately after an interrupt is accepted.

INTA (Output)Interrupt Acknowledge; is used instead of (and has the same timing as) after an INTR is accepted the 8259 Interrupt chip or some other interrupt port.

Restart InterruptsThese three inputs have the same timing as I NTR except they cause an internal RESTART to be automatically inserted.RST7.5: Highest PriorityRST6.5RST5.5: Lowest PriorityThe priority of these interrupts is ordere~d as shown above. These interrupts have a higher priority than the INTR.

TRAP (Input)Trap interrupt is a non-maskable restart interrupt. It is recognized at the same time as INTR. It is unaffected by any mask or Interrupt Enable. It has the highest priority of any interrupt.

RESET IN (Input)Reset sets the Program Counter to zero and resets the Interrupt Enable and HLDA flip-flops none of the other flags or registers (except the instrator register) arc affected The CPU is held in the resetioni as long as Reset is applied.

RESET OUT (Output)Indicates microprocessor is being reset. Can be used as a system RESET. The signal is synchronized to the processor clock.

CLK (Output)Clock Output for use as a system clock when a crystal or R/ C network isTjsed as an input to the CPU. The period of CLK is twice the X1 , X2 input period.

Fetch Cycle (FC)In FC, a microprocessor fetches opcodes (the machine code of an instruction) from the memory.

Interfacing with the I/O Ports