Basics of Fractions OR Chain Rule

Let us try to understand the concept with the help of an example.

By rule of fraction or chain rule:

Step I: We look for our required unit. It is the number of men. So, we write down the number of men given in the question. It is 6.Step II: The number of days gets reduced from 30 to 25, so it will need more men (Reasoning: Less days, more men). It simply means that 6 should be multiplied by a greater fraction because we need a value greater than 6. So, we have:

Step III: Following in the same way, we see that the above figure should be multiplied by a ‘greater fraction’, i.e., by

Step IV: Following in the same way, we see that the above figure should be multiplied by a ‘greater fraction’ i.e. by

Example.2 A sum of Rs 39 was divided among 45 boys and girls. Each girl gets 50 paise, whereas a boy gets one rupee. Find the number of boys and girls.

(Mixing a pure component into a solution)Example.3 A jar contains a mixture of two liquids A and B in the ratio 4 : 1. When 10 litres of the liquid B is poured into the jar, the ratio becomes 2: 3. How many litres of liquid A were contained in the jar?

Method 2: (Alligation with composition of B)

Method 3: (Alligation with percentage of B)

Try yourself:A vessel is filled with liquid, 3 parts of which are water and 5 parts syrup. How much of the mixture must be drawn off and replaced with water so that the mixture may be half water and half syrup?
Explanation 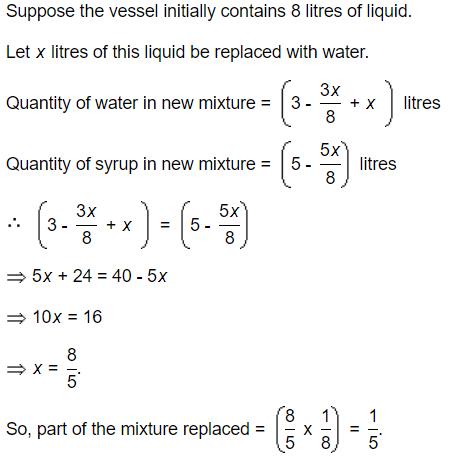 Example.4 Nine litres of solution are drawn from a cask containing water. It is replaced with a similar quantity of pure milk. This operation is done twice. The ratio of water to milk in the cask now is 16 : 9. How much does the cask hold?

Example.6 There are two alloys A and B. Alloy A contains zinc, copper and silver, as 80% 15% and 5% respectively, whereas alloy B also contains the same metals with percentages 70%, 20%, 10% respectively. If these two alloys are mixed such that the resultant will contain 8% silver, what is the ratio of these three metals in the resultant alloy?

Example.7 The cost of an apple is directly proportional to square of its weight in a fruit bazaar. Two friends A and B went there to purchase apples. A got exactly 5 apples per kg and each apple is of same weight. Where as B got exactly 4 apples per kg each weight is exactly same. If B paid Rs. 10 more than A per kg apples, what is the cost of an apple which weighs 1 kg?