Q.1. What is Reconstitution of a partnership firm? (1)

Q.2. Karan, Nakul and Asha were partners in a firm sharing profits and losses in the ratio 3 : 2 : 1. At the time of admission of a partner, the goodwill of the firm was valued at Rs.22,00,000. The accountant of the firm passed the entry in the books of accounts and thereafter showed goodwill at Rs.22,00,000 as an asset in the Balance Sheet. Is he correct in doing so? Why? (1)

Q.3. Anu, Bina end Charan are partners. The firm had given a loan of Rs.2,50,000 to Bina. They decided to dissolve the firm. In the event of dissolution, what is the entry to be passed for settlement of the loan a/c after a discount of 5%. (1)

Q.6. Abha and Beena were partners sharing profits and losses in the ratio of 3 : 2. On April 1st 2013, they decided to admit Chanda for 1/5th share in the profits. They had a reserve of Rs.25,000 which they wanted to show in their new balance sheet. Chanda agreed and the necessary adjustments were made in the books. On October 1st 2013, Abha met with an accident and died. Beena and Chanda decided to admit Abha’s daughter Fiza in their partnership, who agreed to bring Rs.2,00,000 as capital. Calculate Abha’s share in the reserve on the date of her death. (1)

Q.7. BG Ltd. issued 2,000, 12% debentures of ₨ 100 each at premium of 5% on 1stApril 2012. The issue was fully subscribed. According to the terms of issue, interest on the debentures is payable half-yearly on 30th September and 31stMarch and the tax deducted at source is 10%. Pass necessary journal entries related to the debenture interest for the half-yearly ending 31st March, 2013 and transfer of interest on debentures of the year to the Statement of Profit and Loss. (3)

Q.8. Bittu and Sittu were into the business of providing software solutions in India. They were sharing profits and losses in the ratio 3 : 2. They admitted Fittu for 1/5th share in the firm. Fittu, an alumni of IIT, Chennai would help them to expand their business to various South African countries where he had been working earlier. Fittu is guaranteed a minimum profit of Rs.2,00,000 for the year. Any deficiency in Fittu’s share is to be borne by Bittu and Sittu in the ratio 4:1. Losses for the year were Rs.10,00,000. Pass the necessary journal entries. (3)

Q.9. New Ltd. was registered with an authorized capital of Rs.5,00,000 divided into 50,000 equity shares of Rs.10 each. Since the economy was in robust shape, the company decided to offer to the public for subscription 30,000 equity shares of Rs.10 each at a premium of Rs.20 per share. Applications for 29,000 shares were received and allotment was made to all the applicants. All calls were made, and duly received except the final call of Rs.3 per share on 500 shares. Show the ‘Share Capital’ in the Balance Sheet of Newbie Ltd.as per the Companies Act. Also prepare Notes to Accounts for the same. (3)

Q.10. Dumbo Ltd. had a prosperous shirt business. They were manufacturing shirts in India and exporting to Italy. Being a socially aware organization, they wanted to pay back to the society. They decided to not only supply free shirts to 50 orphanages in various parts of the country but also give employment to children from those orphanages who were above 18 years of age. In order to meet the fund requirements, they decided to raise 50,000 equity shares of Rs.100 each and 20,000 9% debentures of Rs.40 each at Rs.50. Pass the necessary journal entries for issue of shares and debentures. Also identify one value which the company wants to communicate to the society. (3)

Prepare Punita’s account to be rendered to her executors. (4)

Q.12. Kanika and Gautam are partners doing a dry cleaning business in Lucknow, sharing profits in the ratio 2 :1 with capitals Rs.5,00,000 and Rs.4,00,000 respectively. Kanika withdrew the following amounts during the year to pay the hostel expenses of her son.

Gautam withdrew Rs.15,000 on the first day of April, July, October and January to pay rent for the accommodation of his family. He also paid Rs.20,000 per month as rent for the office of partnership which was in a nearby shopping complex.

Q.14. (a) Sun Ltd. has an equity share capital of Rs.10,00,000. The company earns a return on investment of 15% on its capital. The company needed funds for diversification. The finance manager had the following options: (i) Borrow Rs.5,00,000 @15% p.a. from a bank payable in four equal quarterly installments starting from the end of the fifth year (ii) Issue Rs.5,00,000 9% Debentures of Rs.100 each @ Rs.105 &  redeemable at a premium of 10% after five years. To increase the return to the shareholders, the company opted for option (ii). Pass the necessary journal entries for issue of debentures.

(b) Water Ltd. issued Rs.6,00,000 8% Debentures of Rs.100 each redeemable after 3 years either by draw of lots or by purchase in the open market. At the end of three years, finding the market price of debentures at Rs.95 per debenture, it purchased all its debentures for immediate cancellation. Pass the necessary journal entries for cancellation of debentures assuming the company has sufficient balance in Debenture Redemption Reserve. (6)

Q.15. Motu and Patlu were partners in a firm sharing profits and losses in the ratio 4 : 3. They decided to dissolve the firm on 1st May 2014. From the information given below, complete - (6) The following adjustments were agreed upon:

(a) C brings in Rs.16,000 as goodwill and proportionate capital.

Z retires from the business and the partners agree that:

(e) The continuing partners have decided to adjust their capitals in their new profit sharing ratio after retirement of Z. Surplus or deficit if any, in their capital accounts will be adjusted through their current accounts.

Applications were received for 75,000 shares and a pro-rata allotment was made to all the applicants.

AB Ltd. invited applications for issuing 75,000 equity shares of ₨ 100 each at a premium of 10 per share. The amount was payable as follows:

Pass necessary journal entries for the above transactions in the books of AB Ltd. (8)

Q.18.     What is meant by 'Cash Equivalents' while preparing Cash Flow Statements? (1)

Q.20.     (a) Name the subheads under the head ‘Current Liabilities’ in the Equity and Liabilities part of the Balance Sheet as per the Companies Act.

(b) State any two objectives of Financial Statements Analysis. (4)

Q.22. Himani Ltd. is into the business of back office operations. Honesty and hard work are the two pillars on which the business has been built. It has a good turnover and profits. Encouraged by huge profits, it decided to give the workers bonus equal to two months salary. Following is the Comparative Statement of Profit and Loss of Himani Ltd. for the years ended 31st March 2013 and 2014. 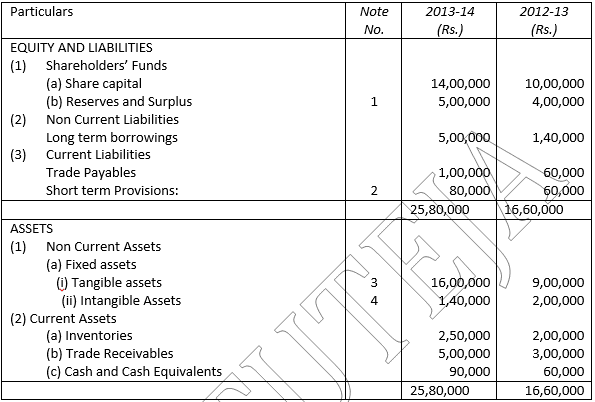 Prepare a Cash Flow Statement after taking into account the following adjustment: