Questions 6-11: Do the following statements agree with the information given in Reading Passage 1? In boxes 6-11 on your answer sheet, write

Q.6. All butterflies’ colours of wings reflect the sense of warning to other predators.Q.7. Insects may imitate butterflies’ wing pattern as well.Q.8. Flying Altitude of the butterfly is determined by their food.Q.9. Beccaloni agreed with the flight height hypothesis and decided to reassure its validity.Q.10. Jatun Sacha has the richest diversity of breeds in the world.Q.11. Beccaloni has more detailed records on the location of butterfly collection than others.

Questions 12-13: Choose the correct letter A, B, C or D Write your answers in boxes 12-13 on your answer sheet.Q.12. Which is correct about butterflies flight altitude?A. Flight height theory already establishedB. Butterfly always flies at a certain heightC. It is like the airplane’s flying phenomenonD. Each butterfly has its own favorable heightQ.13   Which is correct about Beccaloni next investigation after flight height?A. Some certain statistics have already been collectedB. Try to find connections between larval height and adult onesC. It’s very difficult to raise butterfly larvalD. Different larval favors different kinds of trees

You should spend about 20 minutes on Questions 14-27 which are based on Reading Passage 2 below.

A - IT WAS the summer, scientists now realise, when felt. We knew that summer 2003 was remarkable; global warming, at last, made itself unmistakably Britain experienced its record high temperature and continental Europe saw forest fires raging out of control, great rivers drying of a trickle and thousands of heat-related deaths. But just how remarkable is only now becoming clean.B - The three months of June, July and August were the warmest ever recorded in western and central Europe, with record national highs in Portugal, Germany and Switzerland as well as Britain. And they were the warmest by a very long way Over a great rectangular block of the earth stretching from west of Paris to northern Italy, taking in Switzerland and southern Germany, the average temperature for the summer months was 3.78°C above the long-term norm, said the Climatic Research Unit (CRU) of the University of East Anglia in Norwich, which is one of the world’s leading institutions for the monitoring and analysis of temperature records.C - That excess might not seem a lot until you are aware of the context – but then you realise it is enormous. There is nothing like this in previous data, anywhere. It is considered so exceptional that Professor Phil Jones, the CRU’s director, is prepared to say openly – in a way few scientists have done before – that the 2003 extreme may be directly attributed, not to natural climate variability, but to global warming caused by human actions.D - Meteorologists have hitherto contented themselves with the formula that recent high temperatures are consistent with predictions of climate. For the great block of the map – that stretching between 35-50N and 0-20E – the CRU has reliable temperature records dating back to 1781. Using as a baseline the average summer temperature recorded between 1961 and 1990, departures from the temperature norm, or ‘anomalies’: over the area as a whole can easily be plotted. As the graph shows, such as the variability of our climate that over the past 200 years, there have been at least half a dozen anomalies, in terms of excess temperature – the peaks on the graph denoting very hot years – approaching, or even exceeding, 20°C. But there has been nothing remotely like 2003 when the anomaly is nearly four degrees.E - “This is quite remarkable,” Professor Jones told The Independent. “It’s very unusual in a statistical sense. If this series had a normal statistical distribution, you wouldn’t get this number. There turn period “how often it could be expected to recur” would be something like one in a thou-sand years. If we look at an excess above the average of nearly four degrees, then perhaps nearly three degrees of that is natural variability, because we’ve seen that in past summers. But the final degree of it is likely to be due to global warming, caused by human actions.F - The summer of 2003 has, in a sense, been one that climate scientists have long been expecting. Until now, the warming has been manifesting itself mainly in winters that have been less cold than in summers that have been much hotter. Last week, the United Nations predicted that winters were warming so quickly that winter sports would die out in Europe’s lower-level ski resorts. But sooner or later the unprecedentedly hot summer was bound to come, and this year it did.G - One of the most dramatic features of the summer was the hot nights, especially in the first half of August. In Paris, the temperature never dropped below 230°C (73.40°F) at all between 7 and 14 August, and the city recorded its warmest-ever night on 11-12 August, when the mercury did not drop below 25.50°C (77.90°F). Germany recorded its warmest-ever night at Weinbiet in the Rhine valley with the lowest figure of 27.60°C (80.60°F) on 13 August, and similar record-breaking night-time temperatures were recorded in Switzerland and Italy.H - The 15,000 excess deaths in France during August, compared with previous years, have been related to the high night-time temperatures. The number gradually increased during the first 12 days of the month, peaking at about 2,000 per day on the night of 12-13 August, the fell off dramatically after 14 August when the minimum temperatures fell by about 50C. The elderly were most affected, with a 70 per cent increase in mortality rate in those aged 75-94.I - For Britain, the year as a whole is likely to be the warmest ever recorded, but despite the high-temperature record on 10 August, the summer itself – defined as the June, July and August period – still comes behind 1976 and 1955, when there were long periods of intense heat. At the moment, the year is on course to be the third-hottest ever in the global temperature record, which goes back to 1856, behind 1988 and 2002 but when all the records for October, November and December are collated, it might move into second place, Professor Jones said. The 10 hottest years in the record have all now occurred since 1990. Professor Jones is in no doubt about the astonishing nature of the European summer of 2003. “The temperatures recorded were out of all proportion to the previous record,” he said. “It was the warmest summer in the past 500 years and probably way beyond what it was enormously exceptional.”J - His colleagues at the University of East Anglia’s Tyndall Centre for Climate Change Research are now planning a special study of it. “It was a summer that has not: been experienced before, either in terms of the temperature extremes that were reached, or the range and diversity of the impacts of the extreme heat,” said the centre’s executive director, Professor Mike Hulme. “It will certainly have left its mark on a number of countries, as to how they think and plan for climate change in the future, much as the 2000 floods have revolutionised the way the Government is thinking about flooding in the UK. “The 2003 heatwave will have similar repercussions across Europe.”Questions 14-19: Do the following statements agree with the information given in Reading Passage 2? In boxes 14-19 on your answer sheet, write

Q.14. The average summer temperature in 2003 is approximately four degrees higher than that of the past.Q.15. Jones believes the temperature statistic is within the normal range.Q.16. The human factor is one of the reasons that caused the hot summer.Q.17. In a large city, people usually measure temperature twice a day.Q.18. Global warming has an obvious effect of warmer winter instead of hotter summer before 2003.Q.19. New ski resorts are to be built on a high-altitude spot.

Questions 20-21: Answer the questions below using NO MORE THAN THREE WORDS AND/OR NUMBERS from the passage for each answer. Write your answers in boxes 20-21 on your answer sheet.Q.20.  What are the two hottest years in Britain besides 2003?Q.21.  What will affect UK government policies besides climate change according to Hulme?

Question 27: Choose the correct letter A, B, C or D. Write your answer in box 27 on your answer sheet.Q.27. Which one can be best served as the title of this passage in the following options?A. Global Warming effectB. Global Warming in EuropeC. The Effects of hot temperatureD. Hottest summer in Europe

You should spend about 20 minutes on Questions 28-40 which are based on Reading Passage 3 below.

Questions 34-37: The reading Passage has six paragraphs A-F. Which paragraph contains the following information? Write the correct letter A-F, in boxes 35-37 on your answer sheet.Q.34. Projected Basic Blue in IBM achieved great success.Q.35. E-learning wins as a priority for many corporations as its flexibility.Q.36. The combination of traditional and e-training environments may prevail.Q.37. Example of fast electronic delivery for a company’s products to its customers.

Questions 38-40: Choose THREE correct letters, among A-E. Write your answers in boxes 38-40 on your answer sheet.A. Technical facilities are hardly obtained.B. Presenting multimedia over the Internet is restricted due to the bandwidth limit.C. It is ineffective imparting a unique corporate value to fresh employees.D. Employees need to block a long time leaving their position attending training.E. More preparation time is needed to keep the course at a suitable level. 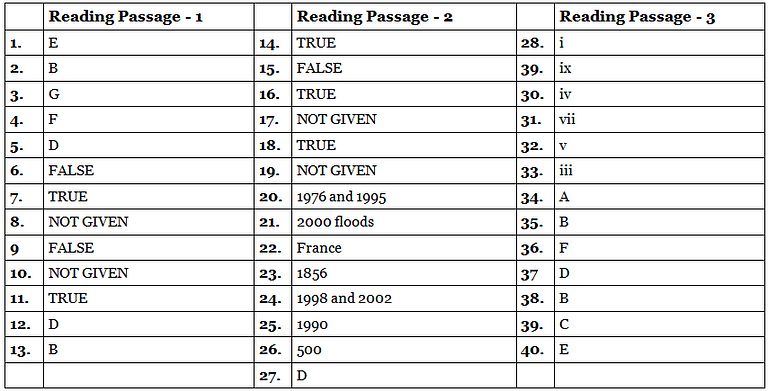