The document Modern Physics I (Part - 1) - Physics, Solution by DC Pandey NEET Notes | EduRev is a part of the NEET Course DC Pandey (Questions & Solutions) of Physics: NEET.
All you need of NEET at this link: NEET

Ques 1: The wavelength for n = 3 to n = 2 transition of the hydrogen atom is 656.3 nm. What are the wavelengths for this same transition in (a) positronium, which consists of an electron and a positron (b) singly ionized helium (Note: A positron is a positively charged electron).Sol: (a) Reduced mass of positronium and electron is m/2 where m = mass of electron)

Ques 3: (a) Find the frequencies of revolution of electrons in n = 1 and n = 2 Bohr orbits. (b) What is the frequency of the photon emitted when an electron in an n = 2 orbit drops to an n = 1 hydrogen orbit?(c) An electron typically spends about 10-8s in an excited state before it drops to a lower state by emitting a photon. How many revolutions does an electron in an n = 2 Bohr hydrogen orbit make in 1.00 × 10-8 s?Sol: 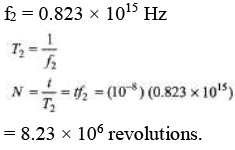 Ques 4: A muon is an unstable elementary particle whose mass is 207 me and whose charge is either +e or-e. A negative muon (μ-) can be captured by a nucleus to form a muonic atom.(a) A proton captures a μ-. Find the radius of the first Bohr orbit of this atom.(b) Find the ionization energy of the atom. Note Attempt this question after reading the whole chapter.Sol:

Ques 6: (a) A gas of hydrogen atoms in their ground state is bombarded by electrons with kinetic energy 12.5 eV. What emitted wavelengths would you expect to see?(b) What if the electrons were replaced by photons of same energy?Sol: (a) En -E1 = 12.5∴

Similarly other wavelengths can also be obtained.(b) n = 3.51 (in option-a)A photon always transfers its energy completely.So it cannot excite the ground state electrons to n = 3 (like and electrons excited it in part-a).Ques 7: For a given element the wavelength of the Kα line is 0.71 nm and of the Kβ line it is 0.63 nm. Use this information to find wavelength of the Lα line.Sol: