The document Modern Synthetic Theory of Organic Evolution Notes | Study Biology Class 12 - NEET is a part of the NEET Course Biology Class 12.
All you need of NEET at this link: NEET

This theory is the result of the work of a number of scientist namely Dobzhansky, Fisher, Haldane, Swall wright, Mayr, Stebbins.

Stebbins discussed this theory in his book ''Process of Organic Evolution'' and Dobzhansky explained it is his book ''Genetics and the origin of species''.

According to this theory new species can not evolved by the presence of variable genotype in  a population. Two factors are also required-natural selection and reproductive isolation.

Natural selection guides different population in to different adaption direction and reproductive isolation between them due to geographical barriers leads these direction to the evolution of new species.

In this theory following factors are included  –

Besides these factors there are two more processes which cause evolutionary changes. These are –

(i) Migration of individuals from one population to another.

(ii) Hybridization among species and also related genera which causes genetic variation in the population  undergoing process of evolution.

Proposed by Hugo-de-vries on the basis of his experiments on a plant Oenothera lamarckiana.

1.   Mutation or discontinuous variation are the raw material of evolution.

3.   Mutants are different from the parents and there are no intermediate stages between the two.

4.   The same type of mutation can appear in several individuals of a species.

5.   Mutation can appear in all direction and all mutations are inheritable.

7.   Mutation are recurring so that the same mutant can appear again & again so change of selection by nature are increased and new species is formed.

Points in favour of mutation theory :

1.   Mutations are actually the source of all variations and fountainhead of evolution.

De-vries mutation theory generally accepted because the mutation were found to be inheritable. It was later through that evolution cannot occur by mutation alone, natural selection and isolation of mutants are also necessary for evolution.

A population is called polymorphic for a character if two or more distinct form are present in this population.

There are 4 types of blood group are present in human being A, B, AB. and O. They are due to the presence of different genotype.

Sickle cell anemia is also an example of polymorphism. In this disease on amino acid is changed in polypeptide chain due to change in one N2 base. That's why the normal shape of RBC is changed into sickle shape.

The organism in which heterozygous condition is present for this characters, the RBC become sickle shaped.

In this type of RBC malarial parasite can't have a normal growth that's why these individuals are resistant towards malaria.

The HbS, HbS, condition leads to the death of organism.

The organism with HbS, HbA condition are selected by nature because these are the fittest of all. The lose of HbS gene due to the death of organism having HbS, HbS is recovered & balanced by the reproduction of heterozygous condition (HbS, HbA).

This type of selection is called balancing selection. It means the  preservation of genetic variability is maintained by the selection of hertozygotes which is called 'Balanced polymorphism'.

But this kind of balancing selection is found very rarely in nature. 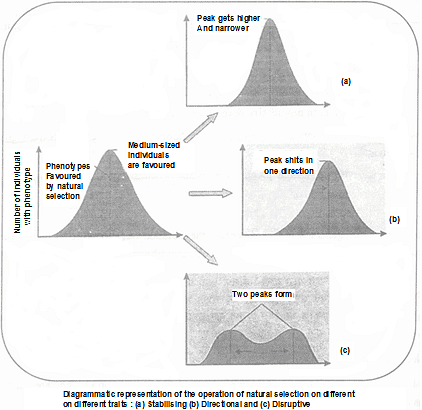 Based upon different organism – environment relationship. Following different kinds of natural selection have been recognised.

Stabilizing selection operates when phenotypic feature coincide with optimum environmental conditions and competition is not present.

It keeps a population genetically constant.

It favours the average or normal phenotypes and eliminate the extreme variants, that fall towards both ends of the bell-shaped curve of variability for the distribution of measurements of phenotypic traits.

Due to continuous elimination of both extremes, the bell shaped curve tends to narrow.

The optimum birth weight favoured by stabilizing selection is 7.3 pounds.

New born infants less than 5.5 pounds and more than 10 pounds have the highest mortality rate. The curve for mortality is virtually the complement of the curve of survival. 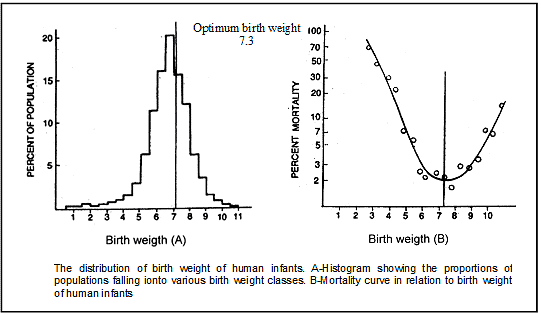 Directional selection produce a regular change in a population in respect to certain traits.

This form of selection operates in response to gradual changes in environmental condition.

Directional selection removes more individuals from one end of the normal curve of variability distribution and adds towards the other end and alters the mean value of the trait in the population in a particular direction.

So the mean moves in one direction.

Directional selection operates when environment is changing in one direction.

(2)  Resistance of insects to DDT.

This is probably the rarest form of selection but can be very important in bringing about evolutionary change.

Presence of more than one phenotype in a population.

This can split a population into two sub-population.

If the gene flow between the sub-population is prevented, each population may give rise to a new species. In some cases this form of selection can give rise to the appearance of different phenotype within a population, known as polymorphism.

Eg. Shell pattern in limpets : Shell patterns of limpets (marine mollusca) present a continuous, ranging from pure white to dark tan. These are either attached to white goose neck barnacles or to tan-coloured rocks. The white or light-coloured limpets camouflaged with white barnacles and tanned ones were protected on the tan-coloured rocks. Limpets of intermediate shell patterns, being conspicuous are preyed by predatory shore birds, resulting in disruptive selection.

The document Modern Synthetic Theory of Organic Evolution Notes | Study Biology Class 12 - NEET is a part of the NEET Course Biology Class 12.
All you need of NEET at this link: NEET