2.2.5 A few tips on calculating moments

The safest way to calculate the moment of a force is to slog through the MA = (r− rA) × F formula, as described at the start of this section. As long as you can write down position vectors and force vectors correctly, and can do a cross product, it is totally fool-proof.

But if you have a good physical feel for forces and their effects you might like to make use of the following short cuts.

Thus, a set of 2D forces in the {i,j} plane can only exert moments in the ±k direction – this makes calculating moments in 2D problems rather simple; we just have to figure out whether the sign of a moment is positive or negative. 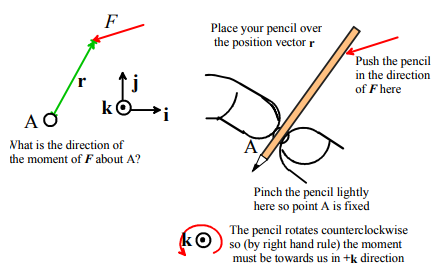 You can do a quick experiment to see whether the direction is +k or –k. Suppose you want to find the direction of the moment caused by F in the picture above about the point A. To do so,

In practice you will soon find that you can very quickly tell the direction of a moment (in 2D, anyway) just by looking at the picture, but the experiment might help until you develop this intuition.

Again, this trick is most helpful in 2D. Its use is best illustrated by example. Let’s work through the simple 2D example problems again, but now use the short-cut.

Example 1: The beam shown below is uniform and has weight W. Calculate the moment exerted by the gravitational force about points A and B.

The perpendicular distance from a vertical line through the CG to A is L/2. The pencil trick shows that W exerts a clockwise moment about A. Therefore

Similarly, the perpendicular distance to B is L/2, and W exerts a counterclockwise moment about B. Therefore

Example 2. Member AB of a roof-truss is subjected to a vertical gravitational force W and a horizontal wind load P. Calculate the moment of the resultant force about B.

The perpendicular distance from the line of action of W to B is L/2. W exerts a counterclockwise moment about B. Therefore W exerts a moment MB = (L/2)Wk

The perpendicular distance from the line of action of P to B is (L/ 2) tan θ . P also exerts a counterclockwise moment about B. Therefore

The total moment is

Example 3: It is traditional in elementary statics courses to solve lots of problems involving ladders (oh boy! Aren’t you glad you signed up for engineering?) . The picture below shows a ladder of length L and weight W resting on the top of a frictionless wall. Forces acting on the ladder are shown as well. Calculate the moments about point A of the reaction force at B (which acts perpendicular to the ladder) and the weight force at C (which acts at the center of gravity, half-way up the ladder). 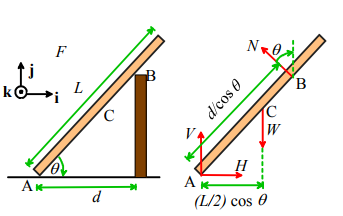 The perpendicular distance from point A to the line along which W is acting is (L/ 2) cosθ .  The direction of the moment is –k.  Therefore

Let’s compare these with the answer we get using MA = (r - rA)× F. We can take the origin to be at A to make things simple.  Then, for the force at B

giving the same answer as before, but with a whole lot more effort!

Similarly, for the weight force

3. The moment exerted by a force is unchanged if the force is moved in a direction parallel to the direction of the force.

This is rather obvious in light of trick (2), but it’s worth stating anyway.

The wording of this one probably loses you, so let’s start by trying to explain what this means.

First, let’s review what we mean by the component of a moment about some axis. The formula for the moment of a force about the origin is

The trick gives you a quick way to calculate one of the components. For example, let’s try to find the i component of the moment about the origin exerted by the force shown in the picture.

The rule says(i) Identify the force components perpendicular to the i axis – that’s Fz and Fy in this case;(ii) Multiply each force component by its perpendicular distance from the axis. Drawing a view down the i axis is helpful. From the picture, we can see that Fz is a distance y from the axis, and Fy is a distance z from the axis. The two contributions we need are thus yFz and zFy.(iii) Add the two contributions according to the right hand screw rule. We know that each force component exerts a moment ±i - we have to figure out which one is +i and which is –i. We can do the pencil experiment to figure this out – the answer is that Fz exerts a moment along +i, while Fy causes a moment along –i. So finally

Example: The structure shown is subjected to a vertical force V and horizontal force H acting at E. Calculate the k component of moment exerted about point A by the resultant force. 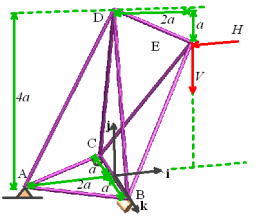 Our trick gives the answer immediately. First, draw a picture looking down the k axis 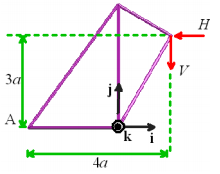 This trick clearly can save a great deal of time. But to make use of it, you need excellent 3D visualization skills.