To calculate the moment of a force about some point, we need to know three things:

2. The position vector (relative to some convenient origin) of the point where the force is acting (x, y, z) or better r = xi +yj +zk

The moment of F about point A is then defined as

The moment of F about the origin is a bit simpler

Just one word of caution is in order here – when you compute the resultant moment, you must take moments about the same point for every force.

Taking moments about a different point for each force and adding the result is meaningless!

We work through a few examples of moment calculations

Example 1: The beam shown below is uniform and has weight W. Calculate the moment exerted by the gravitational force about points A and B.

We know (from the table provided earlier) that the center of gravity is half-way along the beam. The force (as a vector) is

To calculate the moment about A, we take the origin at A. The position vector of the force relative to A is

The moment about A therefore

To calculate the moment about B, we take B as the origin. The position vector of the force relative to B is

Example 2. Member AB of a roof-truss is subjected to a vertical gravitational force W and a horizontal wind load P.  Calculate the moment of the resultant force about B.

The resultant force is

Therefore the moment about B is

Example 3. The structure shown is subjected to a force T acting at E along the line EF. Calculate the moment of T about points A and D. This example requires a lot more work. First we need to write down the force as a vector. We know the magnitude of the force is T, so we only need to work out its direction. Since the force acts along EF, the direction must be a unit vector pointing along EF. It’s not hard to see that the vector EF is

We can divide by the length of EF (a

) to find a unit vector pointing in the correct direction

The force vector is

Next, we need to write down the necessary position vectors

Finally, we can work through the necessary cross products Example 4. Finally, we work through a simple problem involving distributed loading. Calculate expressions for the moments exerted by the pressure acting on the beam about points A and B.

The position vector of the strip relative to A is

The force acting on the strip therefore exerts a moment

The position vector of the strip relative to B is

The force acting on the strip exerts a moment

2.2.4 The Physical Significance of a Moment

1. The moment of a force about some point quantifies its tendency to rotate an object about that point.

3. The direction of a moment specifies the axis of rotation associated with the rotational force, following the right hand screw convention.

The best way to understand the physical significance of a moment is to think about the simple experiments you did with levers & weights back in kindergarten. Consider a beam that’s pivoted about some point (e.g. a see-saw).

Hang a weight W at some distance d to the left of the pivot, and the beam will rotate (counter-clockwise)

To stop the beam rotating, we need to hang a weight on the right side of the pivot. We could

These simple experiments suggest that the turning tendency of a force about some point is equal to the distance from the point multiplied by the force. This is certainly consistent with MO = r × F

To see where the cross product in the definition comes from, we need to do a rather more sophisticated experiment. Let’s now apply a force F at a distance d from the pivot, but now instead of making the force act perpendicular to the pivot, let’s make it act at some angle. Does this have a turning tendency Fd? 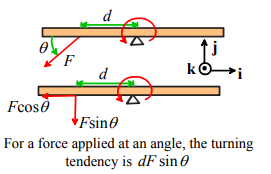 A little reflection shows that this cannot be the case. The force F can be split into two components – F sinθ perpendicular to the beam, and F cosθ parallel to it. But the component parallel to the beam will not tend to turn the beam. The turning tendency is only dF sinθ .

Let’s compare this with MO = r × F Take the origin at the pivot, then

Finally we need to think about the significance of the direction of the moment. We can get some insight by calculating MO = r × F for forces acting on our beam to the right and left of the pivot

For the force acting on the left of the pivot, we just found

For the force acting on the right of the pivot

Specifically, the direction of a moment specifies the axis associated with the rotational force, following the right hand screw convention.