We now turn our attention to the insulated gate FET or metal oxide semi-conductor FET which is of greater commercial importance than the junction FET.

Most MOSFETS however are triodes, with the substrate  internally connected to the source. The circuit symbols used by several manufacturers are indicated in the Fig below. 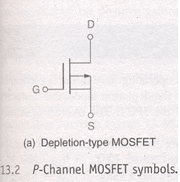 Both of them are P- channel

The construction difference between the two is shown in the fig given below. 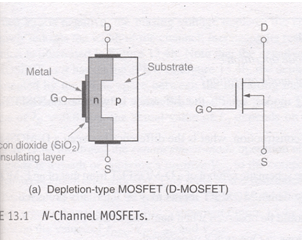 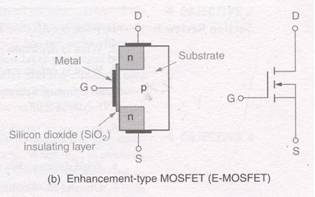 The E-MOSFET on the other hand has no such channel physically. It depends on the gate voltage to form a channel between the source and the drain terminals.

Since the gate is insulated from the rest of the component, the MOSFET is sometimes referred to as an insulated gate FET or IGFET.

The foundation of the MOSFET is called the substrate. This material is represented in the schematic symbol by the center line that is connected to the source.

CONSTRUCTION OF AN N-CHANNEL MOSFET:-

The N- channel MOSFET consists of a lightly doped p-type substance into which two heavily doped n+ regions are diffused as shown in the Fig. These n+ sections , which will act as source and drain. A thin layer of insulation silicon dioxide (SiO2) is grown over the surface of the structure, and holes are cut into oxide layer, allowing contact with the source and drain. Then the gate metal area is overlaid on the oxide, covering the entire channel region. Metal contacts are made to drain and source and the contact to the metal over the channel area is the gate terminal.The metal area of the gate, in conjunction with the insulating dielectric oxide layer and the semiconductor channel, forms a parallel plate capacitor. The insulating layer of SiO2 is the reason why this device is called the insulated gate field effect transistor. This layer results in an extremely high input resistance (1010 to 1015 ohms) for MOSFET.

The basic structure of D–MOSFET is shown in the fig. An N-channel is diffused between source and drain with the device and appreciable drain current Idss flows for zero gate to source voltage, Vgs=0. 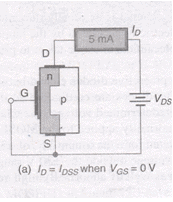 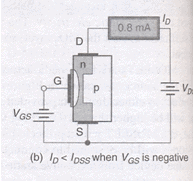 Enhancement mode operation of the D-MOSFET:- 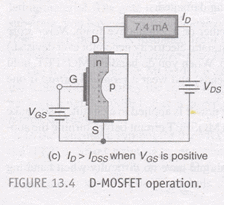 The fig. shows the drain characteristics for the N-channel depletion type MOSFET 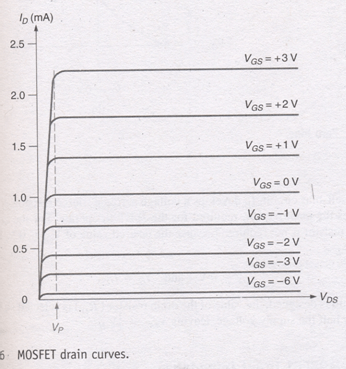 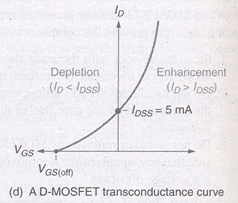 The E-MOSFET is capable of operating only in the enhancement mode. The gate potential must be positive w.r.t to source. 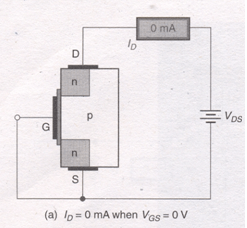 The volt ampere drain characteristics of an N-channel enhancement mode MOSFET are given in the figure. 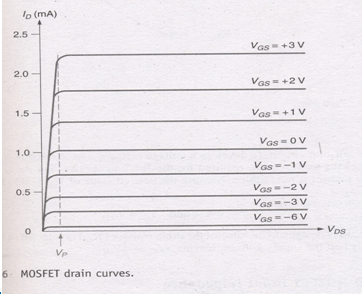 Where K is constant for the MOSFET . found as

From the data specification sheets, the 2N7000 has the following ratings. 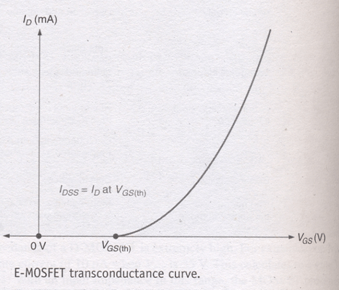 One of the primary contributions to electronics made by  MOSFETs  can be found in the area of digital (computer electronics). The signals in digital circuits are made up of rapidly switching dc levels. This signal is known as a rectangular wave ,made up of two dc levels (or logic levels). These logic levels are 0V and +5V.

A group of circuits with similar circuitry and operating characteristics is referred to as a logic family. All the circuits in a given logic family respond to the same logic levels, have similar speed and power-handling capabilities  , and can be directly connected together. One such logic family is complementary MOS (or CMOS)  logic. This logic family is made up entirely of  MOSFETs.