More than One Correct Options

Ques 1: particle having a velocity v = v0 at t = 0 is decelerated at the rate

where α is a positive constant.(a) The particle comes to rest at

(b) The particle will come to rest at infinity.
(c) The distance travelled by the particle before coming to rest is

i.e., the particle will stop at

i.e., when the particle stops

∴Speed of particle at t = 10 s is 9 m/s.Option (d) is correct.Ques 3: An object moves with constant acceleration

Which of the following expressions are also constant ?

∴ Option (a) is incorrect.

∴ Option (b) is correct.v2 is scalar.∴ Option (c) is incorrect.

∴ Option (d) is incorrect.Ques 4: Ship A is located 4 km north and 3 km east of ship B. Ship A has a velocity of 20 kmh-1 towards the south and ship B is moving at 40 kmh-1 in a direction 37° north of east. X and 7-axes are along east and north directions, respectively(a) Velocity of A relative to B is

(c) Velocity of A relative to B is 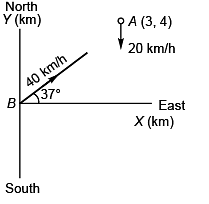 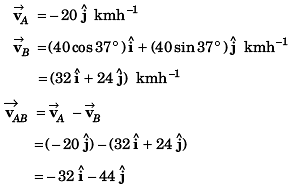 Position of A relative to B: 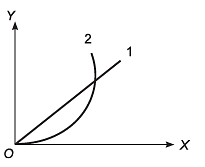 …(i)∴ Graph between a (acceleration) and time (t) will be as curve 1.∴ Option (a) is correct.From equation 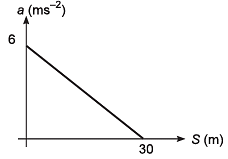 Ques 9: For a moving particle which of the following options may be correct?

Ans: (a, c)Sol: If particle’s path is(i) straight with backward motion(ii) not straight somewhere.
Distance moved will be greater than the modulus of displacement∴

Option (a) is correct.
If particle returns to its initial position, the value of

will be zero while its average speed (vav) will not be zero.∴ Option (c) is correct.Ques 10: Identify the correct graph representing the motion of a particle along a straight line with constant acceleration.

Option (a) is correct.Ques 12: The figure shows the velocity (v) of a particle plotted against time (t).

displacement of particle at time 2T is zero.
Option (c) is correct.

Option (d) is correct.Ques 13: The speed of a train increases at α constant rate a from zero to v and then remains constant for an interval and finally decreases to zero at a constant rate β. The total distance travelled by the train is l. The time taken to complete the journey is t. Then 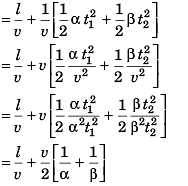 Option (b) is correct.For t to be minimum.