Ques 21: Two objects are moving along the same straight line. They cross a point A with an acceleration a, 2a and velocity 2u, u at time t = 0. The distance moved by the object when one overtakes the other is

Option (a) is correct.Ques 22: A cart is moving horizontally along a straight line with constant speed 30 ms-1. A particle is to be fired vertically upwards from the moving cart in such a way that it returns to the cart at the same point from where it was projected after the cart has moved 80 m. At what speed (relative to the cart) must the projectile be fired? (Take g = 10ms-2)(a) 10 ms-1

Option (c) is correct.Ques 23: The figure shows velocity-time graph of a particle moving along a straight line. Identify the correct statement. 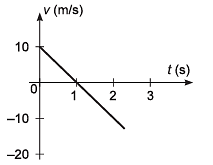 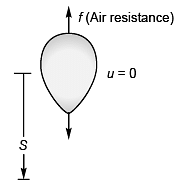 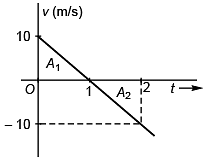 ∴  Displacement of particle at time (t = 2)= (+ 5 m) + (-5 m) = 0 m.i.e., the particle crosses its initial position at t = 2 s.Option (b) is correct.Ques 24: A ball is thrown vertically upwards with a velocity v0. I f the vertical downward direction is considered to be positive, then the correct variation of velocity with time t is represented by 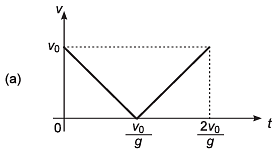 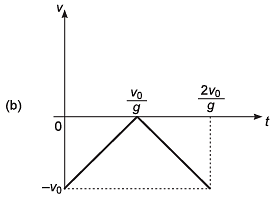 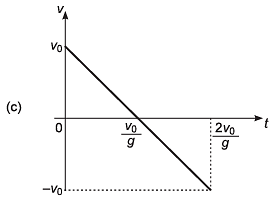 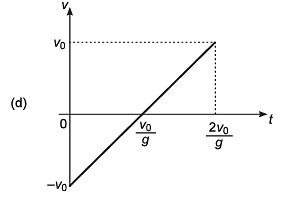 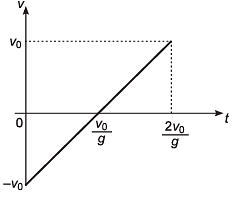 Sol: As downward direction is considered to be + ive, velocity of ball at t = 0 will be - v0.
Thus, option (a) and (c) are incorrect.
Now, as the ball will have +ive acceleration throughout its motion option (b) is also incorrect.
∴ Correct option is (d).Ques 25: A boy standing in an elevator accelerating upward throws a ball upward with a velocity v0. The ball returns in his hands after a time t. The acceleration of the lift is

Option (d) is correct.Ques 30: A particle m oves along the curve

Here x varies with time as

Where x and y are measured in metre and t in second. At t = 2s, the velocity of the particle (in ms-1) is

i.e., v ∝ tOption (b) is correct.Ques 32: The graph describes an airplane’s acceleration during its take-off run. The airplane’s velocity when it lifts off at t = 20 s is 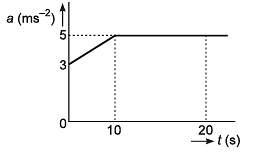 = 90 m/sQues 33: A particle moving in a straight line has velocity-displacement equation as

Option (b) is correct.Ques 34: A particle is thrown upwards from ground. It experiences a constant resistance force which can produce a retardation of 2 ms-2. The ratio of time of ascent to time of descent is (g = 10 ms-2)(a) 1 : 1

Sol: See answer to question no. 2.