The document Movements of ocean water: Waves, Tides and Ocean Currents Notes | EduRev is a part of UPSC category.
All you need of UPSC at this link: UPSC

≫ Types of TidesA. TIDES BASED ON THE FREQUENCY

B. TIDES BASED ON THE SUN, THE MOON, AND THE EARTH’S POSITIONS1. Spring Tides: When the sun, the moon, and the earth are in a straight line, the height of the tide will be higher than normal. These are called as a spring tides. They occur twice in a month-one on the full moon (Poornima) and the other on the new moon (Amavasya). 2. Neap Tides: Normally after seven days of a spring tide, the sun and the moon become at a right angle to each other with respect to the earth. Thus, the gravitational forces of the sun and the moon tend to counteract one another. The tides during this period will be lower than the normal which are called as the neap tides. They also occur twice in a month- during the first quarter moon and the last quarter moon.

When the leading edge of the incoming tide forms a wave/ waves of water that travel up a river or a narrow bay against the direction of the river or bay’s current, it is called as a tidal bore. The Indian rivers like the Ganges, Brahmaputra, Indus, etc exhibits tidal bores.INTER-TIDAL ZONE

The intertidal zone, also known as the foreshore and seashore and sometimes referred to as the littoral zone, is the area that is above water at low tide and under water at high tide (i.e., the area between the tide-marks).EFFECTS OF TIDES 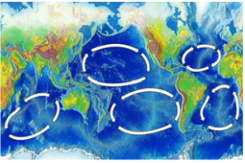 The ocean currents can be also classified as:

Upwelling in an Ocean

(b) The earth’s rotation