The document Multiferroic Materials Physics Notes | EduRev is a part of the Physics Course Basic Physics for IIT JAM.
All you need of Physics at this link: Physics

Materials that are both ferroelectric and magnetic–multiferroics–are rare.  This is because in most ferroelectrics, such as BaTiO3, the ferroelectricity is driven by a hybridization of empty d orbitals with occupied p orbitals of the octahedrally coordinated oxygen ions.  This mechanism requires empty d orbitals and thus cannot lead to multiferroic behavior.  There are consequently very few ferroelectrics that exhibit long range magnetic order, and rarer still are materials where these two disparate order parameters exist and exhibit significant coupling.  Multiferroics have been of particular interest recently both to understand the fundamental aspects of the novel mechanism that gives rise to this magnetic-ferroelectric coupling, as well as because of the intriguing possibility of using these coupled order parameters in novel device applications.  In particular, recent "proof of principle" work has shown that it is possible to control the magnetic phase with an applied electric field, and control the electric polarization with an applied magnetic field.The hexagonal HoMnO3 system of particular interest here is a prototype multiferroic.  The holmium-oxygen displacements give rise to a ferroelectric moment along the crystallographic c axis at very high temperatures (TC = 875 K), while the Mn moments order at 72 K.  The order parameters are naturally coupled through the Ho-Mn exchange and anisotropy interactions.  The crystal structure is shown in the figure, where we see that the Mn spin system has the added interest that the moments occupy a fully frustrated triangular lattice. 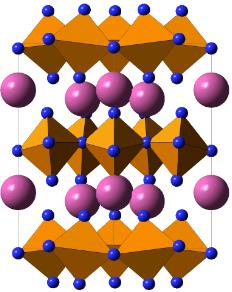 Side view of crystal structure 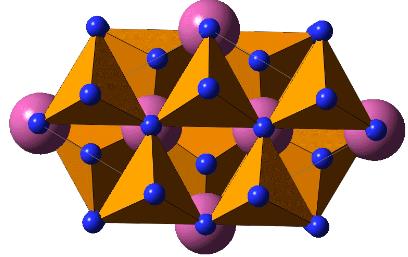 Purple spheres represent holmium ions, blue spheres oxygen ions arranged octahedrally with the Mn ions in the middle.The Mn spins order at 72 K, and then the magnetic structure undergoes a spin reorientation transition at 40 K (in zero applied field).  At both of these transitions there are anomalies in the dielectric constant, demonstrating that there is strong coupling between the magnetic and ferroelectric order parameters. 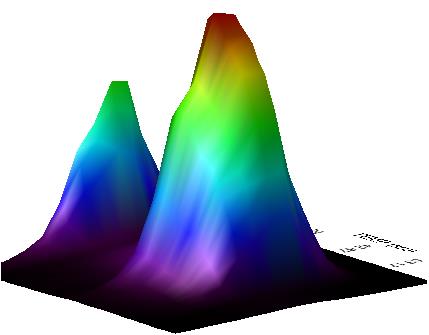 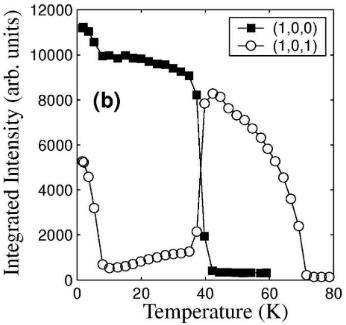 Three magnetic structures for the Mn spins.The application of a magnetic field (along the c-axis) broadens and moves the spin-reorientation transition in temperature, as shown by the data below.  The data allow the phase boundary to be mapped in the (H,T) plane.  At low T additional transitions are observed, which are also hysteretic. 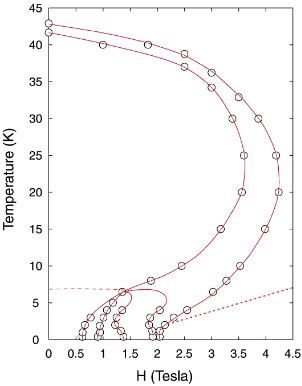 Phase diagram as a function of (H,T) determined from neutron diffraction measurements.The spin dynamics of this system turns out to be particularly interesting.  Inelastic neutron scattering measurements reveal the planar nature of the spin system, and have established the basic model for the magnetic interactions in the system. The non-collinear spin structure gives rise to three different "flavors" of bosons.  The single-ion anisotropy of the (ferroelectric) holmium rare earth ions couples to the Mn spins, and in our view plays a critical role in both the spin reorientation transitions (much like that found in Nd2CuO4) and in the multiferroic behavior. 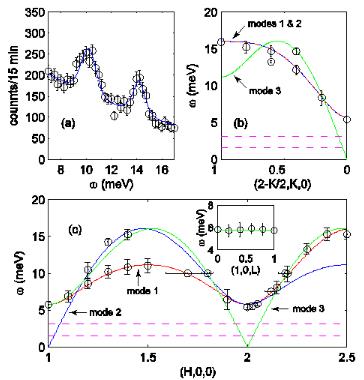 Spin-wave dispersion relations at 20 K for two in-plane directions in reciprocal space, and along the c-axis (inset) where no significant dispersion is observed, indicating that the system is 2d in nature.  The solid curves are fits to a 2d Heisenberg model.  Dashed lines indicate two (dispersionless) crystal field levels of Ho at 1.5 and 3.1 meV. The scan shown is for Q=1.3,0,0, where the apparent sloping background is actually due to the holmium crystal field level at lower energy.