Increasing traffic flow has forced engineers to increase the number of lanes of highways in order to provide good manoeuvring facilities to the users. The main objectives of this lecture is to analyze LOS which is very important factor for a traffic engineer because it describes the traffic operational conditions within a traffic stream. Also we are going to study the characteristics and capacity for multilane highways. Free-flow speed is an important parameter that is being used extensively for capacity and level-of- service analysis of various types of highway facilities.

A highway is a public road especially a major road connecting two or more destinations. A highway with at least two lanes for the exclusive use of traffic in each direction, with no control or partial control of access, but that may have periodic interruptions to flow at signalized intersections not closer than 3.0 km is called as multilane highway. They are typically located in suburban areas leading to central cities or along high-volume rural corridors that connect two cities or important activity centers that generate a considerable number of daily trip 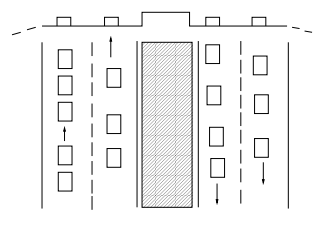 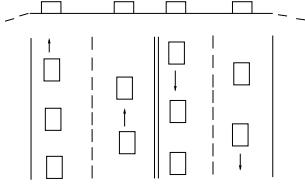 Multilane highways generally have posted speed limits between 60 km/h and 90 km/h. They usually have four or six lanes, often with physical medians or two-way right turn lanes (TWRTL), although they may also be undivided. The traffic volumes generally varies from 15,000 - 40,000 vehicles per day. It may also go up to 100,000 vehicles per day with grade separations and no cross-median access. Traffic signals at major intersections are possible for multilane highways which facilitate partial control of access. Typical illustrations of multilane highway configurations are provided in Fig. 23:1 and

An important operation characteristic of any transport facility including the multi lane highways is the concept of capacity. Capacity may be defined as the maximum sustainable flow rate at which vehicles or persons reasonably can be expected to traverse a point or uniform segment of

a lane or roadway during a specified time period under given roadway, traffic, environmental, and control conditions; usually expressed as vehicles per hour, passenger cars per hour, or persons per hour. There are two types of capacity, possible capacity and practical capacity. Possible capacity is defined as the maximum number of vehicles that can pass a point in one hour under prevailing roadway and traffic condition. Practical capacity on the other hand is the maximum number that can pass the point without unreasonable delay restriction to the average driver’s freedom to pass other vehicles. Procedure for computing practical capacity for the uninterrupted flow condition is as follows:

1. Select an operating speed which is acceptable for the class of highways the terrain and the driver.

2. Determine the appropriate capacity for ideal conditions from table 1.

Basically any two of the following three performance characteristics can describe the LOS for a multilane highway. Each of these measures can indicate how well the highway accommodates the traffic demand since speed does not vary over a wide range of flows, it is not a good indicator of service quality. Density which is a measure of proximity of other vehicles in the traffic stream and is directly perceived by drivers and does not vary with all flow levels and therefore density is the most important performance measure for estimating LOS. Based on the quantitative parameter, the LOS of a facility can be divided into six qualitative categories, designated as LOS A,B,C,D,E,F The definition of each level of service, is given below:

4. Multiply these factors by ideal capacity value obtained from step 2.

Level of Service A

Travel conditions are completely free flow. The only constraint on the operation of vehicles lies in the geometric features of the roadway and individual driver preferences. Lane changing, merging and diverging manoeuvre within the traffic stream is good, and minor disruptions to traffic are easily absorbed without an effect on travel speed. Average spacing between vehicles is a minimum of 150 m or 24 car lengths. Fig. 23:3 shows LOS A.

Level of Service B

Travel conditions are at free flow. The presence of other vehicles is noticed but it is not a constraint on the operation of vehicles as are the geometric features of the roadway and individual driver preferences. Minor disruptions are easily absorbed, although localized reduction in LOS are noted. Average spacing between vehicles is a minimum of 150 m or 24 car lengths. Fig. 23:4 below shows LOS B. 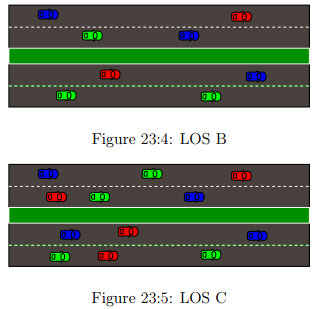 Traffic density begins to influence operations. The ability to manoeuvre within the traffic stream is affected by other vehicles. Travel speeds show some reduction when free-flow speeds exceed 80 km/h. Minor disruptions may be expected to cause serious local deterioration in service, and queues may begin to form. Average spacing between vehicles is a minimum of 150 m or 24 car length. Fig. 23:5 shows LOS C.

The ability to manoeuvre is severely restricted due to congestion. Travel speeds are reduced as volumes increase. Minor disruptions maybe expected to cause serious local deterioration in service, and queues may begin to form. Average spacing between vehicles is a minimum of 150 m or 24 car length. Fig. 23:6 shows LOS D. 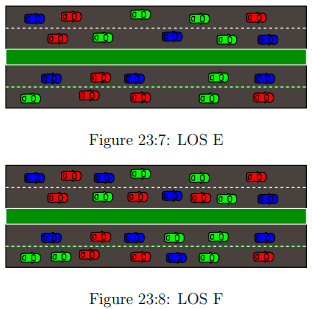 Operations are unstable at or near capacity. Densities vary, depending on the free-flow speed. Vehicles operate at the minimum spacing for which uniform flow can be maintained. Disruptions cannot be easily dissipated and usually result in the formation of queues and the deterioration of service to LOS F. For the majority of multilane highways with free-flow speed between 70 and 100km/h, passenger-car mean speeds at capacity range from 68 to 88 km/h but are highly variable and unpredictable. Average spacing between vehicles is a minimum of 150 m or 24 car length. Fig. 23:7 shows LOS E.

A forced breakdown of flow occurs at the point where the numbers of vehicles that arrive at a point exceed the number of vehicles discharged or when forecast demand exceeds capacity. Queues form at the breakdown point, while at sections downstream they may appear to be at capacity. Operations are highly unstable, with vehicles experiencing brief periods of movement followed by stoppages. Travel speeds within queues are generally less than 48 km/h. Note that the term LOS F may be used to characterize both the point of the breakdown and the operating condition within the queue. Fig. 23:8 shows LOS F.

Determination of Level of Service

The determination of level of service for a multilane highway involves three steps:

3. Determination of level of service

3. A minimum of 3.6 m of total lateral clearance in the direction of travel. Clearances are measured from the edge of the outer travelled lanes (shoulders included) and lateral clearance of 1.8 m or greater are considered to be equal to 1.8 m. 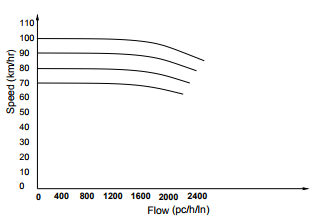 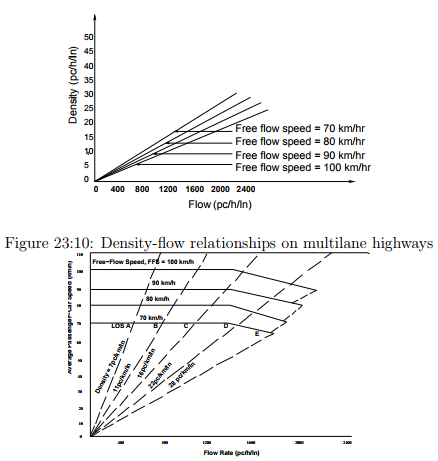 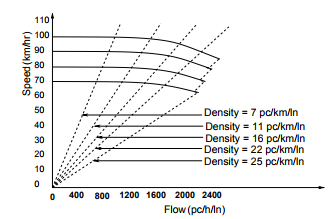 6. Only passenger cars in the traffic stream.

The average of all passenger-car speeds measured in the field under low volume conditions can be used directly as the free-flow speed if such measurements were taken at flow rates at or below 1400 pc/h/ln. No adjustments are necessary as this speed reflects the net effect of all conditions at the site that influence speed, including lane width, lateral clearance, type of median, access points, posted speed limits, and horizontal and vertical alignment. Free-flow speed also can be estimated from 85th-percentile speed or posted speed limits, research suggests that free-flow speed under base conditions is 11 km/h higher than the speed limit for 65 km/h to 70 km/h speed limits and 8 km/h higher for 80 km/h to 90 km/h speed limits. Fig. 23:12 shows speedflow curves with LOS criteria for multilane highways, here LOS is easily determined for any value of speed simply by plotting the point which is a intersection of flow and corresponding speed. Note that density is the primary determinant of LOS. LOS F is characterized by highly unstable and variable traffic flow. Prediction of accurate flow rate, density, and speed at LOS F is difficult.

When field data are not available, the free-flow speed can be estimated indirectly as follows:

Table 23:2: Level of Service criteria for a typical free flow speed of 100 kmph proposed in HCM 2000 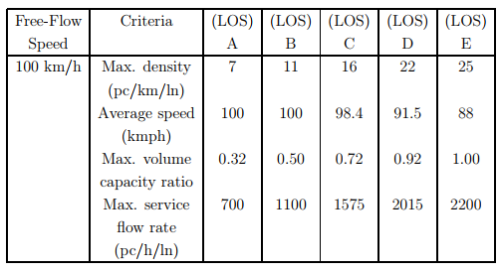