The document Muscular Tissue NEET Notes | EduRev is a part of the NEET Course Biology Class 11.
All you need of NEET at this link: NEET

–    It develop from the mesoderm of embryo.

–    Muscles support the bone and other structure.

–    Muscles are responsible for heart beat production of sound, etc.

–    Muscles brings movements of the body parts and locomotion of individual.

–    Muscles are required for delivering a baby.

(a)  Muscles are of three types 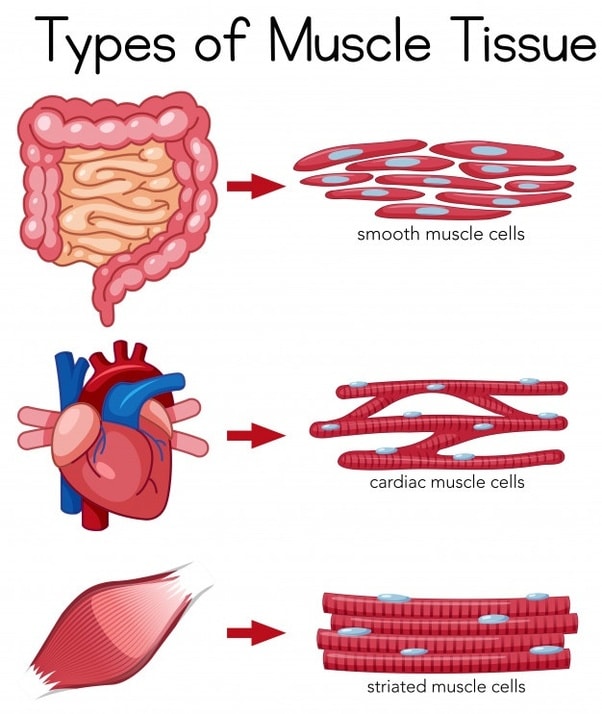 –    These muscle fibres occurs in bundles and are attached to the skeleton.

–    Each muscle fibre is surrounded externally by a delicate membrane sarcolemma.

–    In each fibre many nuclei appears at irregular interval, so each fibre is syncytial.

–    The cytoplasm (Sarcoplasm) of each fibre possess large number of myofibrils which are tightly packed.

–    Each myofibril possess dark and light bands alternating with each other.

–    The dark band of myofibril is called A-bands (Anisotropic bands). Each A band possess  a light zone  called H-zone or Henson’s membrane in the middle.

–    The light band of myofibril is called I-bands (Isotropic bands). Each I-band possess a thin dark z-disc or krause’s membrane in the middle.

The portion between two disc is called a sarcomere. Sarcomere are the functional units of myofibrils.

The primary filament remain confined to A bands only.

Striated muscles are found in the muscle of limbs, tongue, pharynx, beginning of oesophagus, etc.

These muscles are under control of  will.

–    Each fibre is elongated or spindle shaped, having single oval nucleus surrounded by cytoplasm.

–    The fibre is enclosed by plasma membrane and unlike striated muscle there is no sarcolemma.

–    Several of muscles fibre are joined together in bundles by loose connective tissue.

These muscle fibres help in peristalsis. It causes slow and prolonged contraction which is involuntary i.e. not under control of will but are controlled by autonomic nervous system.

Cardiac muscle fibres shows character of both striped and unstriped muscles, fibres in some characteristic, but also have some peculiar characters of its own.

Cylindrical, high vascularization, having more mitochondria and glycogen granules in the sarcoplasm; and having light and dark bands.

–  Cardiac muscles fibre are joined with each other by flat dense zig-zag junctions, called intercalated discs or booster rings.

–  These muscles never get fatigued, blood capillaries penetrate the cardiac muscles fibres. They have the property of contraction even when they are isolated from the body temporarily.

–    The special properties of the cells of nervous tissues are excitability and conductivity.

–    The cells of nervous tissues are specialized for receiving stimuli and transmitting message.

These tissue forms nervous system of the body and include the following parts :

Nervous tissue is formed of four types of cells –

–    A neuron is a nerve cell with all its branches, Neuron is formed from neuroblast.

–    It is structural and functional unit of nervous system.

Neuron is the longest cell of the body.

(A) Cyton  (B) Nerve processes

–    Cyton is also called cell body or soma, its shape is variable.

Dendrites may be one or several. It is branched structure.

–    It is single, long and cylindrical process whose main function is to conduct the nerve impulses away from the cyton, so, axon is efferent in nature.

–    It is the longest nerve process of a neuron.

–    Neurons with very long axon is called golgi type I.

–    Synaptic knobs comes to lie very close to the dendrons of next neuron to form the synapses. There is a microscopic gap of about 200 Å called synaptic cleft.

Acetylcholine or adrenaline is produced by the secretory vesicles of the synaptic knobs.

–    Bipolar neuron - The neuron having one dendron and an axon at the opposite pole of the cell are known as bipolar neuron.

On the basis of functions neurons are of 3 types-

–    Sensory or afferent neuron - They connect Sensory organs with central nervous system and brings sensory impulses into it.

–    Motor or efferent neuron - They connect central nervous system with the effectors. (muscles and glands) and carry motor impulses to them.

–    Interneurons or adjustor neuron - They are present in the central nervous system (Brain and spinal cord) and connect two or more neurons for distant transmission of impulses.

An axon of a neuron is covered with one or two sheaths.

On the basis of presence or absence of sheaths on nerve fibre, nerve fibres are of two types

–    In these nerve fibres around the nerve a sheath of fatty substance is formed which is termed as medullary sheath or myelin sheath.

–    The medullary sheath and node of ranvier are surrounded by a transparent cellular outer covering known as neurolemma of Schwann cell.

–    Just beneath the neurolemma a thin layer of cytoplasm lies, which contains nuclei to form Schwann cells (Sheath cells) at intervals. These nuclei are termed nuclei of Schwann cell.

–    In these nerve fibre no medullary sheath is found. The axon is surrounded by neurilemma and just below neurilemma a layer of cytoplasm containing nuclei at intervals is present. The node of Ranvier and internode are not present.

Functionally the nerve fibres are of two types :

–    Afferent or Sensory fibre - Afferent fibre carries the sensory impulse from the receptor organs to the central nervous system (brain and spinal cord).

–    These are non nervous cells which lie between the neurons of CNS, ganglia and retina of the eye.

–    These are many times (10 times approx) more numerous than neurons.

Neuroglia cells are of following types

–    Astrocytes - These are highly branched.

–    Oligodendrocytes - These have few branched processes which resemble dendrons of the neuron.

–    These act as packing cells between  neurons.

–    These provide nutrition to neurons

–    These act as phagocyte and consume micro organism.

–    These help in memory process

–    These insulate the adjoining neurons.

These cells form an epithelium called ependyma that lines the ventricles of brain and the central canal of the spinal cord. The cells are generally ciliated.

These are special type of neurons of the hypothalamus of brain. These are endocrine in function and release neuro-hormone (releasing factor) through portal system to anterior most lobe of pituitary gland where they regulate secretion of harmones TSH, GH, LH, ACTH, FSH and Prolactin.