(i) Deletion : Loss of a part or segment of chromosome which leads to loss of some gene is called as deletion.

(i) Terminal deletion - Loss of chromosomal segment from one or both ends. 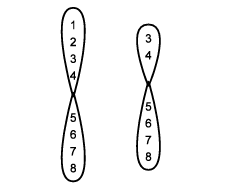 eg. The cry -du-chat syndrome is an example of terminal deletion in short arm of 5th chromosome.

(ii) Intercalary deletion - Loss of chromosomal part between the ends. 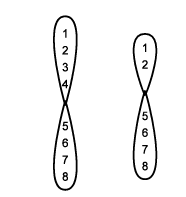 (i) Paracentric - If inversion occur only in one arm and inverted segment does not include centromere.

(ii) Pericentric - In this type of inversion inverted segment include centromere. 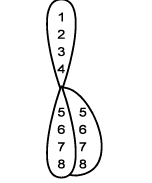 Example : In drosophila "Bar eye character" is observed due to duplication in X-chromosome. Bar eye is a character where eyes are narrower as compared to normal eye shape.

(A) Simple Translocation→ When a chromosomal segment breaks and attached to the terminal end of a non- homologous chromosome.

(B) Interstitial or shift translocation→ If a segment of chromosome breaks and gets inserted in interstitial position of a non homologous chromosome.

eg. Chronic myloid leukemia [C M L] is a type of blood cancer. This disease is a result of reciprocal transiocation between 22 and 9 chromosome.

Note : If exchange of segments takes place in between homologous chromosomes then it is called crossing over.

These antibiotics combine with small subunit of prokaryotic ribosome and Cause misreading of genetic code or induce error in translation.
Main Point :