The document Chapter Notes - Algebraic Expressions Class 7 Notes | EduRev is a part of the Class 7 Course Mathematics (Maths) Class 7.
All you need of Class 7 at this link: Class 7 Expressions that contain only constants are called numeric or arithmetic expressions. Unlike terms remain unchanged in the sum or difference of algebraic expressions. 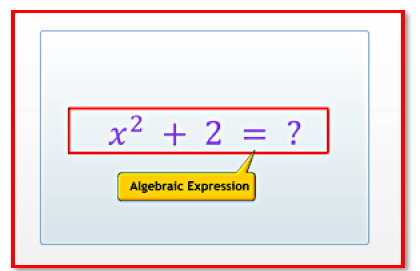 Algebraic expressions can be used to represent number patterns.

Algebraic expressions can be used to represent number patterns. In the following example, we can find the relation between number of cones and the number of ice-cream scoops.

Thus, we can find the value of an algebraic expression if the values of all the variables in the expression are known.

In a similar way, we can write formulas for the perimeter and area for different geometrical figures using simple, easy-to-remember algebraic expressions

• If s represents the side of a square, then its:o Perimeter is 4so Area is s2