The document NCERT Exemplar (Part - 1) - Evolution Notes | EduRev is a part of the NEET Course NEET Revision Notes.
All you need of NEET at this link: NEET

Q.1. Which of the following is used as an atmospheric pollution indicator?(a) Lepidoptera(b) Lichens(c) Lycopersicon(d) LycopodiumAns. (b)Solution.Lichens are sensitive to SO2 pollution. Lichens are very good pollution indicators, they do not grow in polluted areas.Q.2. The theory of spontaneous generation stated that:(a) Life arose from living forms only(b) Life can arise from both living and non-living(c) Life can arise from non-living things only.(d) Life arises spontaneously, neither from living nor from the non-living.Ans. (c)Solution.(i) For a long time it was also believed that life came out of decaying and rotting matter like straw, mud, etc.(ii) According to theory of abiogenesis, life originates from non-living.Q.3. Animal husbandry and plant breeding programmes are the examples of:(a) Reverse evolution(b) Artificial selection(c) Mutation(d) Natural selectionAns. (b)Solution.Animal husbandry and plant breeding programmes are the examples of artificial selection.Q.4. Palaentological evidences for evolution refer to the:(a) Development of embryo(b) Homologous organs(c) Fossils(d) Analogous organsAns. (c)Solution.Palaeritological evidences for evolution refer to the fossils. Fossils provide direct and solid evidence in favour of organic evolution through ages. Fossils are studied for knowing about extinct organisms. Birbal Sahni Institute of Palaeobotany is situated at Lucknow. Birbal Sahni is called ‘Father of Indian Palaeobotany’. Age of fossils is determined by Uranium-Lead method (U238) or Potassium-Argon method or Radioactive Carbon dating (C14). ESR (electron-spin-resonance method) is the most accurate method of dating of fossils.Q.5. The bones of forelimbs of whale, bat, cheetah and man are similar in structure, because:(a) One organism has given rise to another(b) They share a common ancestor(c) They perform the same function(d) The have biochemical similaritiesAns. (b)Solution.Organs having same origin but different functions are called homologous organs. For example, whales, bats, Cheetah and human (all mammals) share similarities in the pattern of bones of forelimbs. Homology indicates common ancestry.Q.6. Analogous organs arise due to:(a) Divergent evolution(b) Artificial selection(c) Genetic drift(d) Convergent evolutionAns. (d)Solution.Organs having different origin but similar function are called analogous. Wings of butterfly and of birds look alike. They are not anatomically similar structures though they perform similar functions. Hence, analogous structures are a result of convergent evolution (different structures evolving for the same function and hence having similarity).Q.7. (p+q)2 = p2 + 2pq + q2 = 1 represents an equation used in:(a) Population genetics(b) Mendelian genetics(c) Biometrics(d) Molecular geneticsAns. (a)Solution.(p + q)2 = p2+ 2pq + q2 = 1 represents an equation used in population genetics.
Above equation is known as Hardy-Weinberg principle in which
p2 — Dominant homozygous
2pq — Heterozygous
q2 — Recessive homozygousQ.8. Appearance of antibiotic-resistant bacteria is an example of:(a) Adaptive radiation(b) Transduction(c) Pre-existing variation in the population(d) Divergent evolutionAns. (c)Solution.Appearance of antibiotic-resistant bacteria is an example of pre-existing variation in the population.Q.9. Evolution of life shows that life forms had a trend of moving from:(a) Land to water(b) Dryland to wet land(c) Fresh water to sea water(d) Water to land
Ans. (d)Solution.Evolution of life shows that life forms had a trend of moving from water to land.Q.10. Viviparity is considered to be more evolved because:(a) The young ones are left on their own(b) The young ones are protected by a thick shell(c) The young ones are protected inside the mother's body and are looked after they are born leading to more chances of survival(d) The embryo takes a long time to developAns. (c)Solution.Viviparity is considered to be more evolved because the young ones are protected inside the mother’s body and are looked after they are bom leading to more chances of survival.Q.11. Fossils are generally found in:(a) Sedimentary rocks(b) Igneous rocks(c) Metamorphic rocks(d) Any type of rockAns. (a)Solution.Fossils are generally found in sedimentary rocks.Q.12. For the MN-blood group system, the frequencies of M and N alleles are 0.7 and 0.3, respectively. The expected frequency of MN-blood group bearing organisms is likely to be(a) 42%(b) 49%(c) 9%(d) 58%Ans. (a)Solution.By the equation (p + q)2  = p2 + 2pq + q2 = 1MN = 2pq 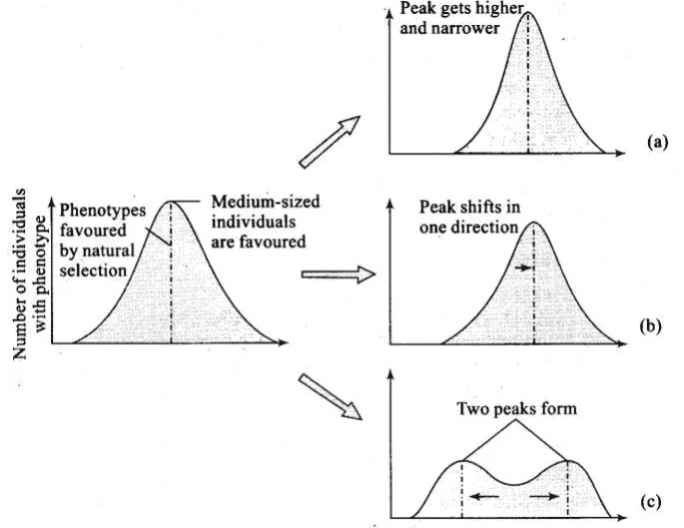 Q.1. What were the characteristics of life forms that had been fossilised?Ans. Fossils are remains of hard parts (like bones, teeth, etc.) of life-forms found in rocks.Q.2. Did aquatic life forms get fossilised? If, yes where do we come across such fossils?Ans. Yes, aquatic life forms get fossilised in the sediments of the water bodies. Later, sediments form the part of sedimentary rocks in which fossils, are deposited.Q.3. What are we referring to? When we say 'simple organisms' or 'complex organisms'.Ans. When we say simple or complex organisms we are talking in terms of evolutionary history of an Organism. A ‘simple organism’ is considered to be primitive and has simple thallus organisation; The level of complexity of metabolism is also low. On the other hand a ‘complex organism’ refers to a more evolved form forming higher levels of structural and functional complexities. They are believed to have arisen from simple organisms.Q.4. How do we compute the age of a living tree?Ans. Age of the living tree is calculated by counting the number of annual rings or by the radioactive carbon dating.Q.5. Give an example for convergent evolution and identify the features towards which they are converging.Ans. Presence of wings in birds and butterfly is an example of convergent evolution. They are adapted for flying (volant mode).Q.6. How do we compute the age of a fossil?Ans. To compute the age of a fossil, we use radiocarbon dating.Q.7. What is the most important pre-condition for adaptive radiation?Ans. Pre-existing variations are the most important pre-condition for adaptive radiation.Q.8. How do we compute the age of a rock?Ans. Age of rock is computed by radiocarbon dating, potassium-argon dating, uranium-lead dating and rubidium-strontium dating method.Q.9. When we talk of functional macro-molecules (e.g. proteins as enzymes, hormones, receptors, antibodies etc), towards what are they evolving?Ans. Similarities in proteins and genes performing a given function among diverse organisms give clues to common ancestry. These biochemical similarities point to the same shared ancestry as structural similarities among diverse organisms. Trypsin (ancient enzyme) is present from protozoa to mammals.Q.10. In a certain population, the frequency of three genotypes is as follows:

What is the likely frequency of B and b alleles?Ans. Frequency of B allele = all of BB + 1/2 of Bb = 22 + 31 = 53%Frequency of b allele = all of bb + 1/2 of Bb = 16 + 31 = 47%Q.11. Among the five factors that are known to affect Hardy-Weinberg equilibrium, three factors are gene flow, genetic drift and genetic recombination. What are the other two factors?Ans. Natural selection and mutation.Q.12. What is founder effect?Ans. Sometimes the change in allele frequency is so different in the new sample of population that they become a different species. Small group of population called founders left their habitat and goes into new habitat. In new habitat this population (founders) shows different genotype frequency from that of the original population and leads to variation. The original drifted population becomes founders and the*effect is called founder effect.Q.13. Who among the Dryopithecus and Ramapithecus was more man-like?Ans. Ramopithecus was more man-like wille Dryopithecus was more a ape-likeQ.14. By what Latin name the first hominid was known?Ans. Homo habilisQ.15. Among Ramapithecus, Australopithecines and Homo habilis - who probably did not eat meat?Ans. Homo habilis