The document NCERT Exemplar (Part - 1) - Human Health and Diseases Notes | EduRev is a part of the NEET Course Biology Class 12.
All you need of NEET at this link: NEET

Q.1. The term 'Health' is defined in many ways. The most accurate definition of the health would be:(a) Health is the state of body and mind in a balanced condition(b) Health is the reflection of a smiling face(c) Health is a state of complete physical, mental and social well-being(d) Health is the symbol of economic prosperity.Ans. (c)Solution.Health is not just the absence of disease. It is a state of complete physical, mental, social and psychological well-being.Q.2. The organisms which cause diseases in plants and animals are called:(a) Pathogens(b) Vectors(c) Insects(d) WormsAns. (a)Solution.A wide range of organisms belonging to bacteria, viruses, fungi protozoans, helminthes, etc., could cause diseases in man. Such disease causing organisms are called pathogens.Q.3. The clinical test that is used for diagnosis of typhoid is:(a) ELISA(b) ESR(c) PCR(d) WidalAns. (d)Solution.The chemical test that is used for diagnosis of typhoid is Widal-Test.Q.4. Diseases are broadly grouped into infectious and non-infectious diseases.In the list given below, identify the infectious diseases.i. Cancerii. Influenzaiii. Allergyiv. Small pox(a) i and ii(b) ii and iii(c) iii and iv (d) ii and ivAns. (d)Solution.

Q.19. Which of the following is not a lymphoid tissue?
(a) Spleen
(b) Tonsils
(c) Pancreas
(d) Thymus
Ans. (c)
Solution.
Spleen, Tonsils and Thymus are lymphoid tissue while pancreas is mixed gland.

Q.2. The immune system of a person is suppressed. In the ELISA test, he was found positive to a pathogen.
(a) Name the disease the patient is suffering from.
(b) What is the causative organism?
(c) Which cells of body are affected by the pathogen?
Ans. (a) Acquired Immuno Deficiency Syndrome (AIDS)
(b) Human Immuno deficiency virus (HIV)
(c) Helper T-lymphocytes (TH or T4)

Q.4. Given below are the pairs of pathogens and the diseases caused by them. Which out of these is not a matching pair and why?

Q.6. Many microbial pathogens enter the gut of humans along with food. What are the preventive barriers to protect the body from such pathogens? What type of immunity do you observe in this case?
Ans. (i) The mucus coating of the epithelium lining of the gut helps in trapping microbes entering the body.
(ii) Saliva in the mouth and hydrochloric acid in gastric juice secreted by stomach prevent microbial growth. This type of immunity is innate immunity.

Q.8. What are interferons? How do interferons check infection of new cells?
Ans. Interferons are natural proteins produced by the cells of immune system in response to foreign agents such as viruses, tumor cells and parasites and protect non-infected cells from further infection. Interferons inhibit the viral replication within host cells, activate natural killer cells and macrophages, increases antigen presentation to lymphocytes, and induce the resistance of host cells to viral infection. When the antigen is presented to matching T-cells’ and B-cells, these cells multiply and remove the foreign substance.

Q.9. In the figure, structure of an antibody molecule is shown. Name the parts A, B and C.
Show A, B and C in the diagram. 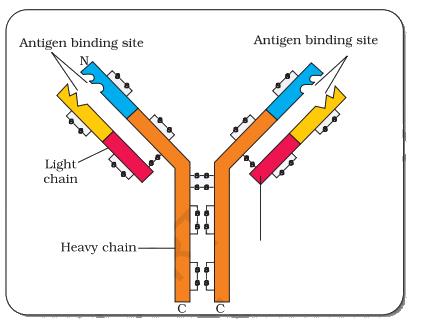 Q.12. The harmful allele of sickle cell anemia has not been eliminated from human population. Such afflicted people derive some other benefit. Discuss.
Ans. The harmful alleles get eliminated from population over a period of time, yet sickle cell anaemia is persisting in human population because SCA is a harmful condition which is also a potential saviour from malaria.
Those with the benign sickle trait possess a resistance to malarial infection. The pathogen that causes the disease spends part of its cycle in the red blood cells and triggers an abnormal drop in oxygen levels in the cell. In carriers, this drop is sufficient to trigger the full sickle-cell reaction, which leads to infected cells being rapidly removed from circulation and strongly limiting the infection’s progress. These individuals have a great resistance to infection and have a greater chance of surviving outbreaks. This resistance to infection is the main reason the SCA allele and SCA disease still exist. It is found in greatest frequency in populations where malaria was and is still often a serious problem.

Q.3. Do you consider passive smoking is more dangerous than active smoking? Why?Ans. Yes, passive smoking is also dangerous as the active smoking because the person is exposed to the same harmful effects of smoking like emphysema, bronchitis, lung cancer, urinary bladder cancer or even peptic ulcer.Q.4. “Prevention is better than cure”. CommentAns. Prevention is better than cure is true as in same cases the disease is non- curable like AIDS and Hepatitis-B, and in some cases’ the treatment causes financial problems in the family.Q.5. Explain any three preventive measures to control microbial infections.Ans. (i) Maintenance of personal and public hygiene is very important for prevention and control of many infectious diseases. Measures for personal hygiene include keeping the body clean; consumption of clean drinking water, food, vegetables, fruits, etc. Public hygiene includes proper disposal of waste and excreta; periodic cleaning and disinfection of water reservoirs, pools, cesspools and tanks and observing standard practices of hygiene in public catering.(ii) In cases of air-borne diseases such as pneumonia and common cold, in addition to the above measures, close contact with the infected persons or their belongings should be avoided.(iii) For diseases such as malaria and filariasis that are transmitted through insect vectors, the most important measure is to control or eliminate the vectors and their breeding places. This can be achieved by avoiding stagnation of water in and around residential areas, regular cleaning of household coolers, use of mosquito nets, introducing fishes like Gambusia in ponds that feed on mosquito larvae, spraying of insecticides in ditches, drainage areas and swamps, etc. In addition, doors and windows should be provided with wire mesh to prevent the entry of mosquitoes.Q.6. In the given flow diagram, the replication of retrovirus in a host is shown.Observe and answer the following questions.(a) Fill in (1) and (2)(b) Why is the virus called retrovirus?(c) Can the infected cell survive while viruses are being replicated and released? 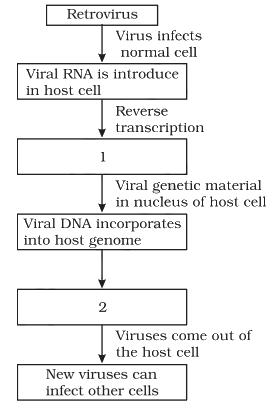 Ans. (a) (i) Viral DNA is produced by reverse transcriptase.(ii) New viral RNA is produced by infected cell.(b) HIV is called retrovirus because it forms DNA from RNA by reverse transcription.(c) Yes, infected cell can survive while viruses are being replicated and released.Q.7. “Maintenance of personal and public hygiene is necessary for prevention and control of many infectious diseases”. Justify the statement giving suitable examples.Ans. Measures for personal hygiene include keeping the body clean; consumption of clean drinking water, food, vegetables, fruits, etc. Public hygiene includes proper disposal of waste and excreta; periodic cleaning and disinfection of water reservoirs, pools, cesspools and tanks, and observing standard practices of hygiene in public catering. These measures are particularly essential where the infectious agents are transmitted through food and water such as typhoid, amoebiasis and ascariasis.Q.8. The following table shows certain diseases, their causative organisms and symptoms. Fill the gaps. 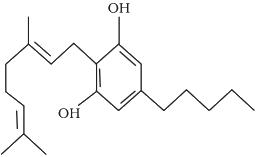 Ans.(a) Cannabinoids(b) Generally taken by inhalation and oral ingestion(c) Affect the cardiovascular system of the bodyQ.10. Give the full form of CT and MRI. How are they different from each other? Where are they used?Ans. CT (computed tomography) and MRI (magnetic resonance imaging) are very useful to detect cancers of the internal organs. Computed tomography uses X-rays to generate a three-dimensional image of the internals of an object. MRI uses strong magnetic fields and non-ionising radiations to accurately detect pathological and physiological changes in the living tissue.