The document NCERT Exemplar - Atoms and Molecules (part-1) Class 9 Notes | EduRev is a part of the Class 9 Course Science Class 9.
All you need of Class 9 at this link: Class 9 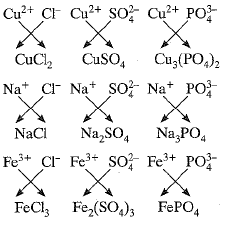 Q.4. Write the cations and anions present (if any) in the following compounds:(a) CH3COONa (b) NaCI (c) H2 (d) NH4NO3 Ans. (a) CH3COO- (Anion) and Na+ (Cation)(b) Na+ (Cation) and Cl- (Anion)(c) H2 (No cation and No anion)(d) NH4+ (Cation) NO3- (Anion)Q.5. Give the formulae of the compounds formed from the following sets of elements:(a) Calcium and fluorine(b) Hydrogen and sulphur(c) Nitrogen and hydrogen(d) Carbon and chlorine(e) Sodium and oxygen(f) Carbon and oxygenAns.

Q.6. Which of the following symbols of elements are incorrect? Give their correct symbols(a) Cobalt CO (b) Carbon c (c) Aluminium AL (d) Helium He (e) Sodium SoAns.

Q.10. Does the solubility of a substance change with temperature? Explain with the help of an example.Ans. Yes, the solubility of solid in liquid increases with increase in temperature, e.g. cold water can dissolve less amount of sugar, whereas hot water can dissolve more amount of sugar.Q.11. Classify each of the following on the basis of their atomicity.

Ans.(a) Diatomic    (b) Triatomic(c) Triatomic    (d) Octa-atomic(e) Tetra-atomic (f) Tetra-atomic(g) Tetra deca-atomic (14)(h) Triatomic(i) Diatomic(j) Penta-atomic(k) Monoatomic(l) MonoatomicQ.12. You are provided with a fine white coloured powder which is either sugar or salt. How would you identify it without testing?Ans. Heat the given substance. If it turns black on heating, then it is sugar, otherwise salt because sugar will lose water on heating and black coloured carbon will be left back.ORTake ice cold water. If the given substance dissolves easily, it is salt. If it does not dissolve easily, it is sugar.Q.13. Calculate the number of moles of magnesium present in a magnesium ribbon weighing 12 g. Molar atomic mass of magnesium is 24 g mol-1.Ans. 1 mole of Mg = 24 g24 g of Mg = 1 mole