The document NCERT Exemplar: Chemical Bonding and Molecular Structure- 2 Notes | EduRev is a part of the JEE Course Chemistry for JEE.
All you need of JEE at this link: JEE

The Lewis structure of PCI3 is:

The bond energy of O+2 > O-2Both are paramagnetic due to the presence of unpaired electrons.Q.33. Explain the shape of BrF5.Ans. Br-atom has configuration:1s2, 2s22p6 , 3s23p63d10, 4s24p5To get pentavalent, two of the p-orbitals are unpaired and electrons are shifted to 4d-orbitals. Q.34. Structures of molecules of two compounds are given below :(i) 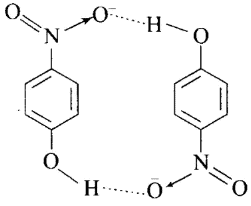 Ans. In the first figure, the ++ overlap is equal to +- overlap, and therefore, these cancel out and net overlap is zero.In the second figure, no overlap is possible because the two orbitals are perpendicular to each other.Q.36. Explain why PCl5 is trigonal bipyramidal whereas IF5 is square pyramidal.Ans.

Q.37. In both water and dimethyl ether, the oxygen atom is the central atom and has the same hybridization, yet they have different bond angles. Which one has a greater bond angle? Give reason.Ans. Dimethyl ether has a larger bond angle than water. This is because there is more repulsion between bond pairs of CH3 groups attached in ether than between bond pairs of hydrogen atoms attached to oxygen in the water. The carbon of the CH3 group in ether is attached to three hydrogen atoms through c bonds and electron pairs of these bonds add to the electron charge density on the carbon atom. Hence, the repulsion between the two CH3 groups will be more than that between two H atoms.

For the N2 molecule, the M.O. configuration is: 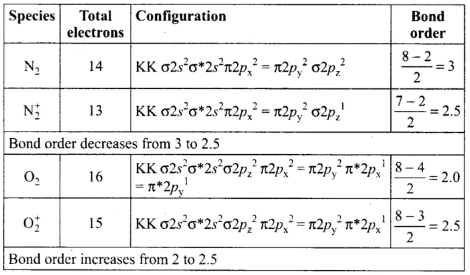 Q.41. Give reasons for the following:(i) Covalent bonds are directional bonds while ionic bonds are nondirectional.(ii) Water molecule has a bent structure, whereas carbon dioxide molecule is linear.(iii) Ethyne molecule is linear.Ans. (i) Since the covalent bond depends on the overlapping of orbitals between different orbitals, the geometry of the molecule is different. The orientation of overlap is different. The orientation of overlap is the factor responsible for their directional nature.(ii) Due to the presence of two lone pairs of electrons on the oxygen atom in H2O, the repulsion between Ip-lp is more. CO2 undergoes sp hybridization resulting in linear shape (O = C = O) while H2O undergoes sp3 hybridization resulting in distorted tetrahedral or bent structure.

Q.42. What is an ionic bond? With two suitable examples explain the difference between an ionic and a covalent bond?Ans. An ionic bond is formed as a result of the electrostatic attraction between the positive and negative ions formed by the transfer of electrons from one atom to another.

Multiple bonds are formed during covalent bonding while in ionic bond a number of bonds can be formed between different atoms.

Increasing order of electronegativity difference: C-H < N-H < O-H < F-HGreater is the difference in electronegativity between two bonded atoms, greater is the ionic character.Q.44. Explain why CO2–3 ion cannot be represented by a single Lewis structure. How can it be best represented?Ans. A single Lewis structure of CO2-3  ion cannot explain all the properties of this ion. It can be represented as a resonance hybrid of the following structures:

If it were represented only by one structure, there should be two types of bonds, i.e., C = O double bond and C – O single bonds but actually all bonds are found to be identical with the same bond length and same bond strength.Q.45. Predict the hybridization of each carbon in the molecule of the organic compound given below. Also indicate the total number of sigma and pi bonds in this molecule.

Q.47. Elements X, Y, and Z have 4, 5, and 7 valence electrons respectively. (i) Write the molecular formula of the compounds formed by these elements individually with hydrogen. (ii) Which of these compounds will have the highest dipole moment?Ans. (i)

CO2 - sp hybridization - LinearNH3 – sp3 hybridization – Distorted tetrahedral or PyramidalQ.50. All the C—O bonds in carbonate ion (CO2–3 ) are equal in length. Explain.Ans.  Carbonate ion is represented by resonating structures as given below:

The actual structure will be the mixture of all resonating structures, also called a resonance hybrid structure.

As it performs resonance so because of its resonating property, all the bonds have partial double bond character and results into equal bond lengths. Carbonate ion is a symmetric, trigonal planar molecule. All three carbon-oxygen bond distances are about 1.28 Angstroms long.

Q.51. What is meant by the term average bond enthalpy? Why is there a difference in bond enthalpy of O—H bond in ethanol (C2H5OH) and water?Ans. All the similar bonds in a molecule do not have the same bond enthalpies, e.g., in CH4

the four C - H bonds do not have the same bond enthalpies because after breaking of the bonds one by one, the electronic environment around carbon changes. Hence, the actual bond enthalpy of the C - H bond is taken as the average value.O - H bond in ethanol

and that in water

do not have a similar electronic environment around oxygen atom. Hence, their O - H bond enthalpies are different. 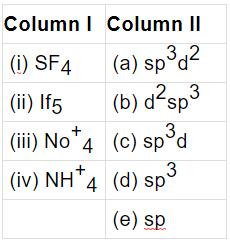 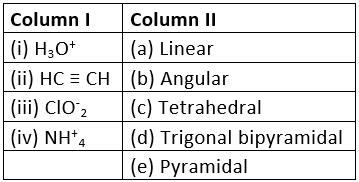 Q.54. Match the species in Column I with the bond order in Column II. 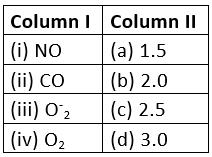 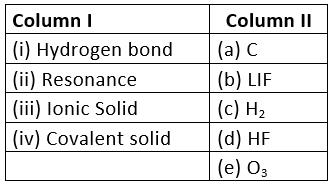 (iii) LiF: Ionic solid(iv) C: Covalent solidQ.56. Match the shape of molecules in Column I with the type of hybridization in Column II. 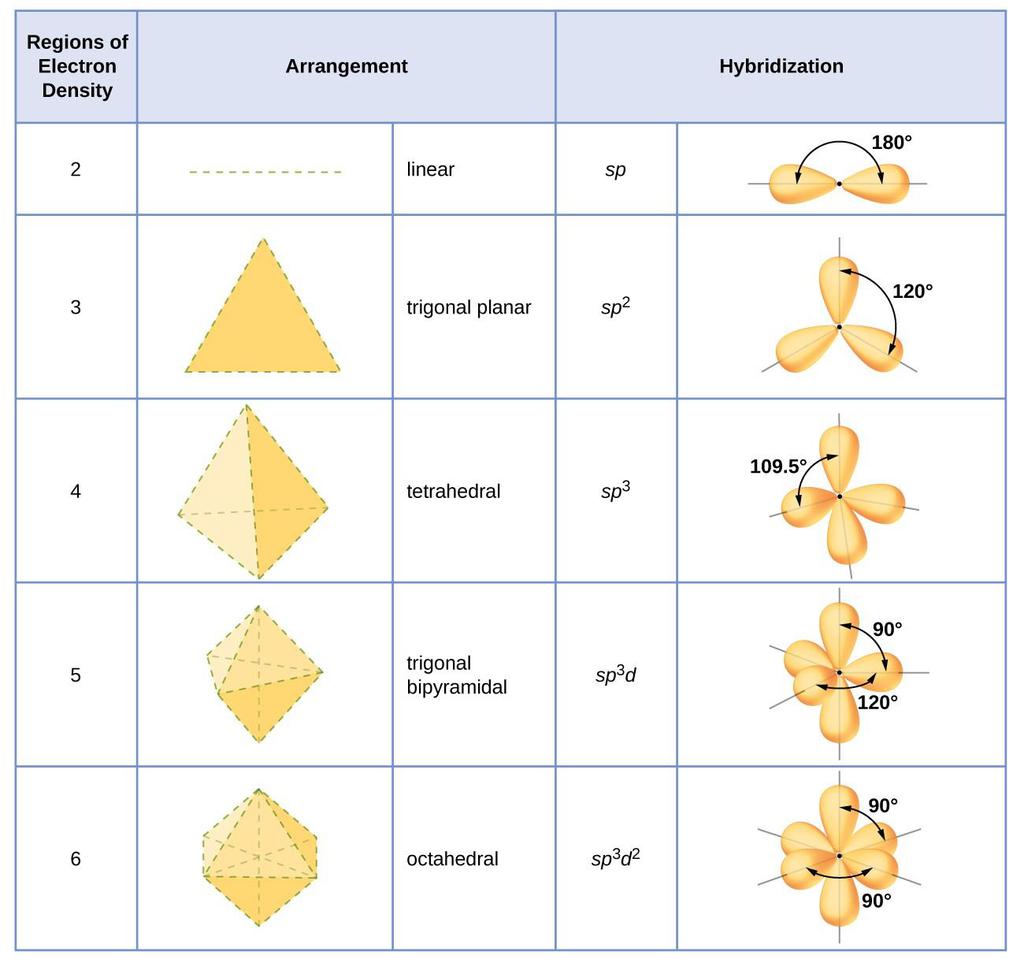 In the following questions, a statement of Assertion (A) followed by a statement of Reason (R) is given. Choose the correct option out of the choices given below each question.

H2O has two lone pairs while NH3 has single lone pair, hence, H2O involves greater lone pair-bond pair repulsion.Q.59. Assertion (A): Among the two O–H bonds in the H2O molecule, the energy required to break the first O–H bond and the other O–H bond is the same.Reason (R): This is because the electronic environment around oxygen is the same even after the breakage of one O–H bond.(a) A and R both are correct, and R is the correct explanation of A.(b) A and R both are correct, but R is not the correct explanation of A.(c) A is true but R is false.(d) A and R both are false.Ans. (d)Solution: Bond energy of two (O – H) bonds in H2O will be different. 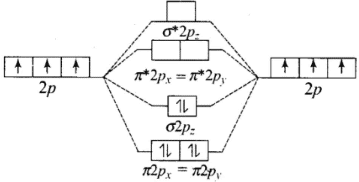 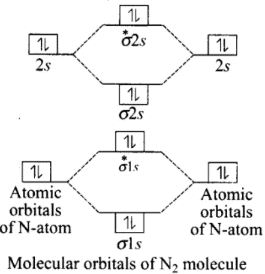 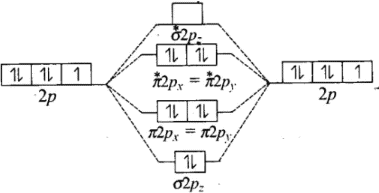 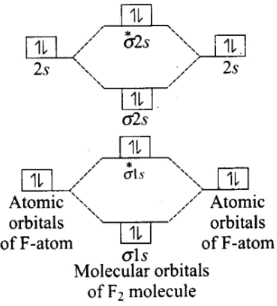 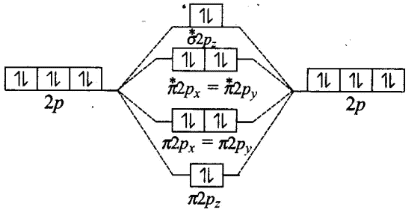 No bond is formed between two Ne atoms or in other words, Ne2 does not exist.Bond Order = 1/2(10 – 10) = 0 (No bond).Q.62. Briefly describe the valence bond theory of covalent bond formation by taking an example of hydrogen. How can you interpret energy changes taking place in the formation of dihydrogen?Ans. The valence bond theory was put forward by Heitler and London in 1927. It was later improved and developed by L. Pauling and J.C. Slater in 1931. The valence bond theory is based on the knowledge of atomic orbitals and electronic configurations of elements, overlap criteria of atomic orbitals, and stability of the molecule.The main points of valence bond theory are:(i) Atoms do not lose their identity even after the formation of the molecule.(ii) The bond is formed due to the interaction of only the valence electrons as the two atoms come close to each other. The inner electrons do not participate in bond formation.(iii) During the formation of a bond, only the valence electrons from each bonded atom lose their identity. The other electrons remain unaffected.(iv) The stability of the bond is accounted for by the fact that the formation of the bond is accompanied by the release of energy. The molecule has minimum energy at a certain distance between the atoms known as internuclear distance. The larger the decrease in energy, the stronger will be the bond formed.

Valence bond Treatment of Hydrogen Molecule:Consider two hydrogen atoms A and B approaching each other having nuclei HA and HB and the corresponding electrons eA and eB respectively.When atoms come closer to form molecules, new forces begin to operate.(a) The force of attraction between the nucleus of an atom and the electron of another atom.(b) The force of repulsion between two nuclei of the atom and electron of two atoms. 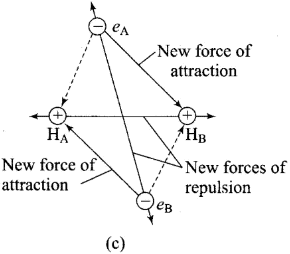 Potential energy diagram for the formation of hydrogen molecules:When two hydrogen atoms are at a farther distance, there is no force operating between them, when they start coming closer to each other, the force of attraction comes into play and their potential energy starts decreasing. As they come closer to each other potential goes on decreasing, but a point is reached when potential energy acquires minimum value.Note:(a) This distance corresponding to this minimum energy value is called the distance of maximum possible approach, i.e. the point which corresponds to minimum energy and maximum stability.(b) If atoms come further closer than this distance of maximum possible approach, then potential energy starts increasing and the force of repulsion comes into play and molecules start becoming unstable. 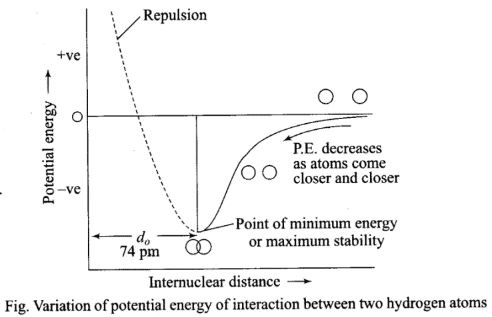 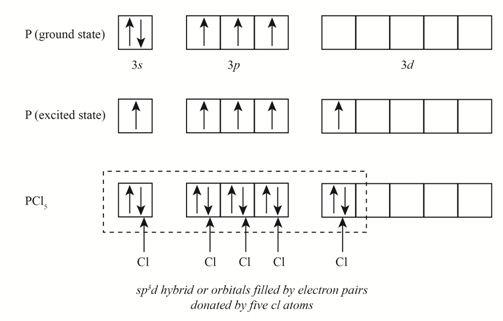 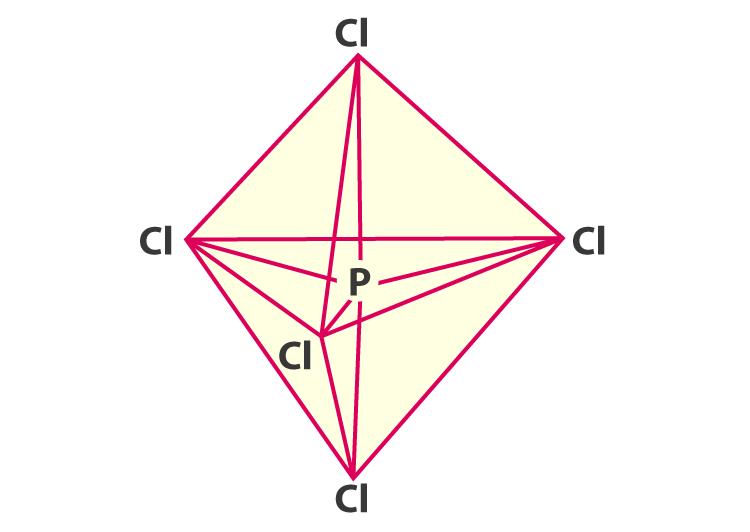 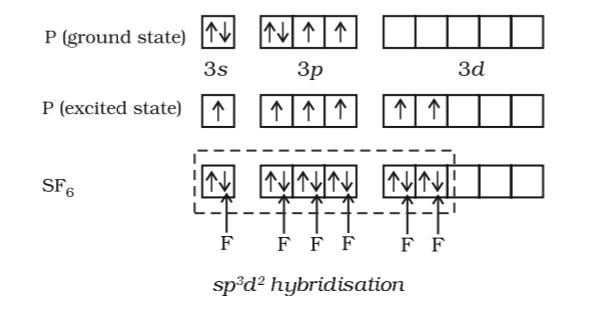 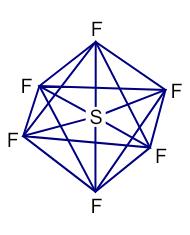 Ans. (i) Hybridization: In order to explain the characteristic geometrical shapes of polyatomic molecules like CH4, NH3, and H2O, etc., Pauling introduced the concept of hybridization. According to him, the atomic orbitals combine to form a new set of equivalent orbitals known as hybrid orbitals.

Unlike pure orbitals, hybrid orbitals are used in bond formation. The phenomenon is known as hybridization, which can be defined as the process of intermixing the orbitals of slightly different energies so as to redistribute their energies, resulting in the formation of a new set of orbitals of equivalent energies and shape.

Both the starred C atoms are sp2 hybridized.(b)

and for oxygen and fluorine order of energy of molecular orbitals is given below :

It has been observed experimentally that for molecules such as B2, C2, N2, etc., the increasing order of energies of various molecular orbitals is:

molecular orbital is higher than that of