The document NCERT Exemplar: Classification of Elements & Periodicity in Properties- 2 Notes | EduRev is a part of the JEE Course Chemistry for JEE.
All you need of JEE at this link: JEE

Q.1. Explain why the electron gain enthalpy of fluorine is less negative than that of chlorine.Ans. In fluorine, the new electron to be added goes to 2p-subshell while in chlorine, the added electron goes to 3p-subshell. Since the 2p-subshell is relatively small as compared to 3p-subshell, the added electron in small 2p-subshell experiences strong interelectronic repulsions in comparison to that in 3p-subshell in Cl. As a result, the incoming electron does not feel much attraction from the nucleus and therefore, the electron gain enthalpy of F is less negative than that of Cl. Q.2. All transition elements are d-block elements, but all d-block elements are not transition elements. Explain.Ans.

Q.3. Identify the group and valency of the element having atomic number 119. Also predict the outermost electronic configuration and write the general formula of its oxide.Ans. The present set up of the Long Form of the Periodic Table can accommodate at the maximum 118 elements. After this, according to Aufbau principle, 8.y-orbital should be filled. Therefore, the outer electronic configuration of element having atomic number 119 will be 8s1. Since it has one electron in the outermost s-orbital, its valency will be 1 and it should belong to group 1 along with alkali metals. The general formula of its oxide will be M20, where M represents the element. Q.4. Ionisation enthalpies of elements of second period are given below: Ionisation enthalpy/ k cal mol–1 :  520, 899, 801, 1086, 1402, 1314, 1681, 2080.Match the correct enthalpy with the elements and complete the graph given in Figure. Also write symbols of elements with their atomic number. 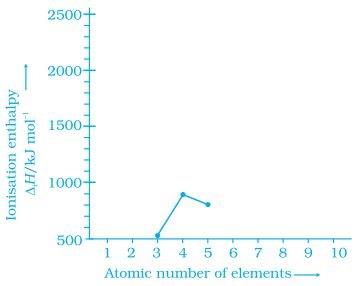 Ans. To match the correct enthalpy with the elements and to complete the graph, the following points are taken into consideration. As we move from left to right across a period, the ionization enthalpy keeps on increasing due to increased nuclear charge and simultaneous decrease in atomic radius. However, there are some exceptions given below:

Q.6. Write four characteristic properties of p-block elements.Ans. The four important characteristic properties of p-block elements are the following:(i) p-Block elements include both metals and non-metals but the number of non-metals is much higher than that of metals. Further, the metallic character increases from top to bottom within a group and non-metallic character increases from left to right along a period in this block.(ii) Their ionization enthalpies are relatively higher as compared to s-block elements.(iii) They mostly form covalent compounds.(iv) Some of them show more than one (variable) oxidation states in their compounds. Their oxidizing character increases from left to right in a period and reducing character increases from top to bottom in a group.Q.7. Choose the correct order of atomic radii of fluorine and neon (in pm) out of the options given below and justify your answer.(i) 72, 160(ii) 160, 160(iii) 72, 72(iv) 160, 72Ans. (i)Solution: Atomic radius decreases as we move from left to right in a period in the periodic table. Fluorine has the smallest atomic radius. As we move to neon in the same period, the atomic radius increases as it has van der Waals radius and van der Waals radii are bigger than covalent radii.Q.8. Illustrate by taking examples of transition elements and non-transition elements that oxidation states of elements are largely based on electronic configuration.Ans.

Q.9. Nitrogen has positive electron gain enthalpy whereas oxygen has negative. However, oxygen has lower ionisation enthalpy than nitrogen. Explain.Ans.

Q.11. p-Block elements form acidic, basic and amphoteric oxides. Explain each property by giving two examples and also write the reactions of these oxides with water.Ans. In p-block, when we move from left to right in a period, the acidic character of the oxides increases due to increase in electronegativity. For example,

On moving down the group, acidic character decreases and basic character increases, e.g., (a) Nature of oxides of 13 group elements

(b) Nature of oxides of 15 group elements

Among the oxides of same element, higher the oxidation state of the element, stronger is the acid. For example, SO3 is a stronger acid than SO2.B2O3 is weakly acidic and on dissolution in water, it forms orthoboric acid. Orthoboric acid does not act as a protonic acid (it does not ionise) but acts as a weak Lewis acid.

Al2O3 is amphoteric in nature. It is insoluble in water but dissolves in alkalies and reacts with acids.

Tl2O is as basic as NaOH due to its lower oxidation state (+1).Tl2O + 2HCl → 2TlCl + H2OP4O10 on reaction with water gives orthophosphoric acid

Cl2O7 is strongly acidic in nature and on dissolution in water, it gives perchloric acid. 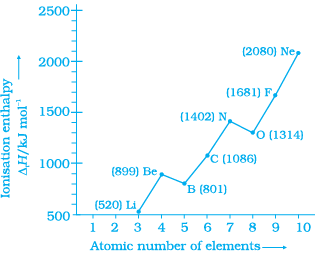 Q.20. Match the correct atomic radius with the element. 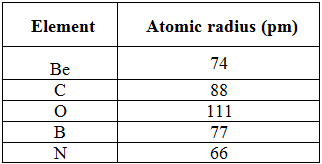 Ans. All the given elements are of same period and along period, atomic radii decrease because effective nuclear charge increases. Thus, the order of atomic radii isO < N < C < B < Be or, Be = 111 pm, O = 66 pm, C = 77 pm, B = 88 pm, N = 74 pm.Q.21. Match the correct ionisation enthalpies and electron gain enthalpies of the following elements.

Since all the elements have one electron in their valence shell, hence, they are placed in first group of the periodic table.Q.30. Write the drawbacks in Mendeleev’s periodic table that led to its modification.Ans. Drawbacks of Mendeleev’s periodic table:1. Position of hydrogen: Hydrogen is placed in group I. However, it resembles the elements of group I (alkali metals) as well as the elements of group VILA, (halogens). Therefore, the position of hydrogen in the periodic table is not correctly defined.2. Anomalous pairs: In certain pairs of elements, the increasing order of atomic masses was not obeyed. In these cases, Mendeleev placed elements according to similarities in their properties and not in increasing order of their atomic masses. For example, argon (Ar, atomic mass 39.9) is placed before potassium (K, atomic mass 39.1). Similarly, cobalt (Co, atomic mass 58.9) is placed before nickel (Ni, atomic mass 58.6) and tellurium (Te, atomic mass 127.6) is placed before iodine (I, atomic mass 126.9). These positions were not justified.3. Position of isotopes: Isotopes are the atoms of the same element having different atomic masses but same atomic number. Therefore, according to Mendeleev’s classification, these should be placed at different places depending upon their atomic masses. For example, isotopes of hydrogen with atomic masses 1,2 and 3 should be placed at three places. However, isotopes have not been given separate places in the periodic table.4. Some similar elements are separated and dissimilar elements are grouped together: In the Mendeleev’s periodic table, some similar elements were placed in different groups while some dissimilar elements had been grouped together. For example, copper and mercury resembled in their properties but they had been placed in different groups. At the same time, elements of group IA such as Li, Na and K were grouped with copper (Cu), silver (Ag) and gold (Au), though their properties are quite different.5. Cause of periodicity: Mendeleev did not explain the cause of periodicity among the elements.6. Position of lanthanoids (or lanthanides) and actinoids (or actinides): The fourteen elements following lanthanum (known as lanthanoids, from atomic number 58-71) and the fourteen elements following actinium (known as actinoids, from atomic number 90 – 103) have not been given separate places in Mendeleev’s table.In order to cover more elements, Mendeleev modified his periodic table.Q.31. In what manner is the long form of periodic table better than Mendeleev’s periodic table? Explain with examples.Ans. Superiority of the Long form of the Table over Mendeleev’s Table:(i) This table is based on a more fundamental property, i.e., atomic number.(ii) It correlates the position of the elements with their electronic configurations more clearly.(iii) The completion of each period is more logical. In a period as the atomic number increases, the energy shells are gradually filled up until an inert gas configuration is reached. It eliminates the even and odd series of IV, V, VI and VII periods of Mendeleev’s periodic table.(iv) The position of VIIIth group  is appropriate in this table. All the transition elements have been brought in the middle as the properties of transition elements are intermediate between s- and p-block elements.(v) Due to separation of two subgroups, dissimilar elements do not fall together. One vertical column accommodates elements with same electronic configuration thereby showing same properties.(vi) In this table, a complete separation between metals and non-metals has been achieved. The non-metals are present in the upper right comer of the periodic table.(vii) There is a gradual change in properties of the elements with increase in their atomic numbers, i.e., periodicity of properties can be easily visualized. The same properties o recurrence in properties occur after the intervals of 2, 8, 8, 18, 18 and 32 elements which indicates the capacity of various periods of the table.(viii) This arrangement of elements is easy to remember and reproduce.Q.32. Discuss and compare the trend in ionisation enthalpy of the elements of group 1 with those of group 17 elements.Ans. The ionization enthalpies decrease regularly as we move down a group from one element to the other. This is evident from the values of the first ionisation enthalpies of the elements of group 1 (alkali metals) and group 17 elements as given in table and figure. 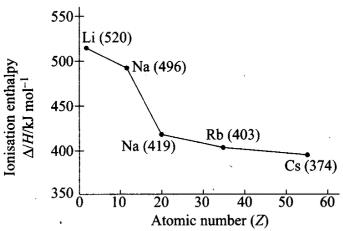