The document NCERT Exemplar - Diversity in Living Organisms Class 9 Notes | EduRev is a part of the Class 9 Course Science Class 9.
All you need of Class 9 at this link: Class 9

Q.1. Write true (T) or false (F):(a) Whittaker proposed five kingdom classification.(b) Monera is divided into Archaebacteria-and Eubacteria.(c) Starting from Class, Species comes before the Genus.
(d) Anabaena belongs to the kingdom Monera.(e) Blue-green algae belongs to the kingdom Protista.
(f) All prokaryotes are classified under Monera.Ans: (a) T(b) T(c) F(d) T(e) F(f) TQ.2. Fill in the blanks:(a) Fungi shows_____mode of nutrition.(b) Cell wall of fungi is made up of_____.(c) Association between blue-green algae and fungi is called as____.(d) Chemical nature of chitin is_____.(e)____has smallest number of organisms with maximum number of similar characters(f) Plants without well-differentiated stem, root and leaf are kept in______.(g)_____are called as amphibians of the plant kingdom.Ans: (a) saprophytic(b) chitin(c) lichen(d) carbohydrate(e) Species(f) thallophyta(g) BryophyteQ.3. You are provided with the seeds of gram, wheat, rice, pumpkin, maize and pea. Classify them whether they are monocot or dicot.Ans: Q.7. Endoskeleton of fishes are made up of cartilage and bone; classify the following fishes as cartilagenous or bony.

Q.15. Fill in the boxes given in figure with appropriate characteristics/plant group (s). Q.16. Write names of few thallophytes. Draw a labelled diagram of Spirogyra.
Ans: Uloihrix, Spirogyra, Cladophora and Chara are the examples of Thallophyta. Q.18. Define the terms and give one example of each.
(a) Bilateral symmetry
(b) Coelom
(c) Triploblastic
Ans: (a) Bilateral symmetry is a type of symmetry in which appendages and organs of the body are paired in which the left and right halves of the body have the same design, e.g. liver fluke.
(b) Coelom is mesoderm lined fluid fille internal body cavity between visceral organs and body wall in which well develope organs can be accommodated, e.g. butterfly
(c) Triploblastic are animals having three laye: of cells from which differentiated tissue can be made. e.er starfish.

Q.19. You are given leech, Nereis, Scolopendra, prawn and scorpion; and all have segmented body organisation. Will you classify them in one group? If no, give the important characters based on which you will separate these organisms into different groups.
Ans: All organisms given in the question do not belong to same group. Leech and Nereis belong to Phylum Annelida because they have metamerically segmented body, i.e. body is divided into many segments internally by septa, closed circulatory system and unjointed appendages. Body segments are lined up one after the other from head to tail. But Scolopendra, Prawn and Scorpion belong to Phylum Arthropoda and they have jointed appendages and open circulatory system.

Q.20. Which organism is more complex and evolved among Bacteria, Mushroom and Mango tree? Give reasons.
Ans: Mango tree because it has:
(a) vascular tissues
(b) differentiated sporophyte
(c) embryo stage
(d) seeds present inside fruit.
But bacteria are prokaryotic. Mushroom is eukaryotic but without any differentiation of root, stem and leaves, absence of vascular tissue and embryo stage. 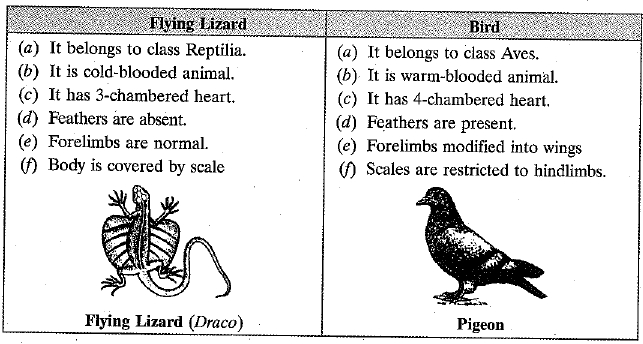