The document NCERT Exemplar - Ecosystem (Part - 1 ) Notes | EduRev is a part of the NEET Course Biology Class 12.
All you need of NEET at this link: NEET

Q.9. Among the following, where do you think the process of decomposition would be the fastest?
(a) Tropical rain forest
(b) Antarctic
(c) Dry arid region
(d) Alpine region
Ans. (a)
Solution.

Q.11. During the process of ecological succession the changes that take place in communities are:
(a) Orderly and sequential
(b) Random
(c) Very quick
(d) Not influenced by the physical environment
Ans. (a)
Solution.
The gradual and fairly predictable change in the species composition of a given area is called ecological succession. An important characteristic of all the communities is that their composition and structure constantly change in response to the changing environmental conditions. These changes are orderly and sequential parallel with the changes in the physical environment.

Q.15. The reservoir for the gaseous type of bio-geo chemical cycle exists in
(a) Stratosphere
(b) Atmosphere
(c) Ionosphere
(d) Lithosphere
Ans. (b)

Q.18. The zone at the edge of a lake or ocean which is alternatively exposed to air and immersed in water is called:
(a) Pelagic zone
(b) Benthic zone
(c) Lentic one
(d) Littoral zone
Ans. (d)

Q.2. What does the base tier of the ecological pyramid represent?
Ans. Producers

Q.3. Under what conditions would a particular stage in the process of succession revert back to an earlier stage?
Ans. Natural or human induced disturbances like fire, deforestation etc.

Q.5. Name an omnivore which occurs in both grazing food chain and the decomposer food chain.
Ans. Sparrow/crow

Q.6. Justify the pitcher plant as a producer.
Ans. It is chlorophyllous and is thus capable of photosynthesis.

Q.7. Name any two organisms which can occupy more than one trophic level in an ecosystem.
Ans. Man and sparrow etc.

Q.10. Among bryophytes, lichens and fern which one is a pioneer species in a xeric succession?
Ans. Crustose lichens.

Q.11. What is the ultimate source of energy for the ecosystems?
Ans. Sunlight (solar radiation)

Q.12. Is the common edible mushroom an autotroph or a heterotroph?
Ans. Heterotroph (as it does not have chlorophyll)

Q.14. Why is the rate of assimilation of energy at the herbivore level called secondary productivity?
Ans. It is because the biomass available to the consumer for consumption is a resultant of the primary productivity from plants.

Q.18. Given below is a figure of an ecosystem. Answer the following questions. 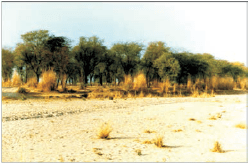 (i) What type of ecosystem is shown in the figure.
(ii) Name any plant that is characteristic of such ecosystem.
Ans.
(i) Desert ecosystem
(ii) Opuntia, Cacti and Acacia

Q.19. What is common to earthworm, mushroom, soil mites and dung beetle in an ecosystem.
Ans. They are all detritivores i.e., decomposing organisms which feed on dead remains of plants and animals.