Q.1. Name an organism found as secondary carnivore in an aquatic ecosystem.Ans. Catfish/water snake etc.Q.2. What does the base tier of the ecological pyramid represent?Ans. ProducersQ.3. Under what conditions would a particular stage in the process of succession revert back to an earlier stage?Ans. Natural or human induced disturbances like fire, deforestation etc.Q.4. Arrange the following as observed in vertical stratification of a forest: Grass, Shrubby plants, Teak, Amaranths.Ans. Grass, Amaranths, Shrubby plants, TeakQ.5. Name an omnivore which occurs in both grazing food chain and the decomposer food chain.Ans. Sparrow/crowQ.6. Justify the pitcher plant as a producer.Ans. It is chlorophyllous and is thus capable of photosynthesis.Q.7. Name any two organisms which can occupy more than one trophic level in an ecosystem.Ans. Man and sparrow etc.Q.8. In the North East region of India, during the process of jhum cultivation, forests are cleared by burning and left for regrowth after a year of cultivation. How would you explain the regrowth of forest in ecological term?Ans. The regrowth of forest is called secondary succession.Q.9. Climax stage is achieved quickly in secondary succession as compared to primary succession. Why?Ans. The rate of succession is much faster in secondary succession as the substratum (soil) is already present as compared to primary succession where the process starts from a bare area (rock).Q.10. Among bryophytes, lichens and fern which one is a pioneer species in a xeric succession?Ans. Crustose lichens.Q.11. What is the ultimate source of energy for the ecosystems?Ans. Sunlight (solar radiation)Q.12. Is the common edible mushroom an autotroph or a heterotroph?Ans. Heterotroph (as it does not have chlorophyll)Q.13. Why are oceans least productive?Ans. Oceans are least productive because they do not receive sufficient sunlight which is necessary for 1° productivity.Q.14. Why is the rate of assimilation of energy at the herbivore level called secondary productivity?Ans. It is because the biomass available to the consumer for consumption is a resultant of the primary productivity from plants.Q.15. Why are nutrient cycles in nature called biogeochemical cycles?Ans. Nutrient cycles in nature called biogeochemical cycles because the cycling of nutrients occurs between living organisms (bio) and non-living things-geo- (rocks, air and water, etc.)Q.16. Give any two examples of xerarch succession.Ans. (a) Bare rocks (xerosere)(b) Sandy areas (psammosere)Q.17. Define self sustainability.Ans. The degree at which the system can sustain itself without external support is called self sustainability.Q.18. Given below is a figure of an ecosystem. Answer the following questions. 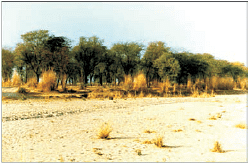 (i) What type of ecosystem is shown in the figure.(ii) Name any plant that is characteristic of such ecosystem.Ans. (i) Desert ecosystem(ii) Opuntia, Cacti and AcaciaQ.19. What is common to earthworm, mushroom, soil mites and dung beetle in an ecosystem.Ans. They are all detritivores i.e., decomposing organisms which feed on dead remains of plants and animals.