The document NCERT Exemplar: Haloalkanes and Haloarenes- 2 Notes | EduRev is a part of JEE category.
All you need of JEE at this link: JEE

(b) Both these compounds form different products on treatment with aq NaOH.

(c) Both these compounds form same products on reduction

are secondary bromides.Q.41. Which of the following compounds can be classified as aryl halides?(i) p-ClC6H4CH2CH(CH3)2(ii) p-CH3CHCl(C6H4)CH2CH3(iii) o-BrH2C—C6H4CH(CH3)CH2CH3(iv) C6H5—ClAns. (i, iv)Solution.Aryl halides: These are the compounds in which the halogen atom is bonded to the sp 2 - hybridised carbon atom of an aromatic ring.Q.42. Alkyl halides are prepared from alcohols by treating with(i) HCl + ZnCl2(ii) Red P + Br2(iii) H2SO4 + KI(iv) All of theseAns. (i, ii)Solution.(a) Alcohol when treated with HCl + ZnCl2 then alkyl halide is formed.

(b) Alcohol when treated with red P and X2 then alkyl halide is formed.

Q.44. Aryl chlorides and bromides can be easily prepared by electrophilic substitution of arenes with chlorine and bromine respectively in the presence of Lewis acid catalysts. But why does preparation of aryl iodides requires presence of an oxidising agent?Ans. lodination reactions are reversible in nature.C6 H6 + I2 ⇌ C6 H5 I + HIIn this above reaction, hydrogen iodide is formed apart from the required product. It has to be removed from the reaction mixture in order to prevent the backward reaction.To carry out the reaction in the forward direction, HI formed during the reaction is removed by oxidation using oxidising agent such as HIO3 or HNO3. The reaction is as follows:5HI + HIO3 → 3I2 + 3H2O;2HI + 2HNO3 →  I + 2NO2 + 2H2OBy using a suitable oxidising agent HI is oxidised to give I2.Q.45. Out of o-and p-dibromobenzene which one has higher melting point and why?Ans. p-dibromobenzene has higher melting point than its o-isomer due to symmetry. Due to symmetry, p- isomer fits in the crystal lattice better than the o-isomer.Hence, p-dibromobenzene has higher melting point.Q.46. Which of the compounds will react faster in SN1 reaction with the –OH ion?CH3 — CH2 — Cl or C6H5 — CH2 — ClAns. SN1 mechanism depends upon the stability of carbocation that is formed as intermediate in the mechanism.CH6 — CH2 — Cl will form C6H5+ CH2 carbocation as intermediateThis carbocation is resonance stabilised and will react faster in SN1 reaction.

While carbocation formed in CH3CH2Cl is CH3CH2. This carbocation is highly unstable and not give SN1 reaction with −OH ion.Q.47. Why iodoform has appreciable antiseptic property?Ans. Iodofrom liberates I2 when it comes in contact with skin. Antiseptic property of iodine is due to the liberation of I2 not because of iodoform itself.

Now, more the number resonating structure higher will be the stability of the compound and lesser will be its reactivity. In haloarenes, more resonating structures are observed than the haloalkenes. So, haloarenes are less reactive than haloarenes.Q.49. Discuss the role of Lewis acids in the preparation of aryl bromides and chlorides in the dark.Ans. Lewis acids are electron deficient species. They are responsible for inducing heterolytic fission in halogen molecules.Role of Lewis acid is to produce electrophile. The electrophile produced will attack on electron rich benzene to produce aryl bromides and chlorides.AlCl3 + Cl2 → [AlCl4]−+ Cl+AlBr3 + Br2 → [AIBr4]− + Br+This electrophile will further attack on benzene to form respective aryl halide.

Ans. Partial double bond character of a bond increases the strength of the bond and hence, decreases the stability. Phenol will not react with a mixture of NaBr and H2SO4 because it is resonance stabilised. Due to resonance, partial double bond character arises in C–O bond of phenol and it becomes more stable than alcohol.Reaction 2NaBr + 3H2SO4 → 2NaHSO4 + SO2 + Br2 + 2H2O

Q.51. Which of the products will be major product in the reaction given below?Explain

Ans. In the given reaction, (B) is the major product of the reactions. According to Markownikoff’s rule, H is added to the C atom with higher number of hydrogen atoms.Q.52. Why is the solubility of haloalkanes in water very low?Ans. Haloalkanes are slightly soluble in water. For the solubility to haloalkane in water, energy is required to overcome the attractions between its own molecules and to break the bonds between water molecules.Less energy is released when new attractions are set up between the haloalkanes and the water molecules as these are not as strong as the original hydrogen bonds in water. As a result, the solubility of haloalkanes in water is low.Q.53. Draw other resonance structures related to the following structure and find out whether the functional group present in the molecule is ortho, para directing or meta directing.

Ans. Resonance in halobenzene is as follows:

From the above resonating structure it is very clear that electron density is rich at ortho and para position. Therefore, it is ortho and para directing not meta directing.Q.54. Classify the following compounds as primary, secondary and tertiary halides.(i) 1-Bromobut-2-ene(ii) 4-Bromopent-2-ene(iii) 2-Bromo-2-methylpropaneAns. The structural formula of the given compounds are:(i)

In compound (i), carbon atom to which halogen is bonded, is further bonded to two hydrogen and one carbon of hydrocarbon chain. So, it is primary halide,In compound (ii), α-carbon is bonded with one hydrogen and two carbons of two hydrocarbon chain. So, it is secondary halide.In compound (iii) α-carbon is bonded to three alkyl group, so it is tertiary halide.Q.55. Compound ‘A’ with molecular formula C4H9Br is treated with aq. KOH solution.The rate of this reaction depends upon the concentration of the compound ‘A’ only. When another optically active isomer ‘B’ of this compound was treated with aq. KOH solution, the rate of reaction was found to be dependent on concentration of compound and KOH both.(i) Write down the structural formula of both compounds ‘A’ and ‘B’.(ii) Out of these two compounds, which one will be converted to the product with inverted configuration.Ans. (i) As the rate of reaction depends upon the concentration of compound 'A' (C4H9Br) only therefore, the reaction is proceeded by SN1 mechanism and the given compound will be tertiary alkyl halide i.e., 2-bromo -2 methylpropane and the structure is as follow

Q.57. Identify the products A and B formed in the following reaction :(a)  CH3—CH2—CH= CH—CH3+HCl → A + BAns. In the given reaction, addition occur and the following two products (A and B) are possible

Further the carbocation formed from compound (A) is slightly less stable than carbocation leading to the formation of compound (B) therefore the amount of 2-chloropentane (S) will be slightly more than that of 3-chloropentane (A).Q.58. Which of the following compounds will have the highest melting point and why?(I)

Ans. In compound (II), both the CH3 groups and Cl atoms at para-position to each other. Therefore, compound (II) is more symmetrical and it fits in the crystal lattice better than the other two isomers and hence it has the highest melting point than the others.Q.59. Write down the structure and IUPAC name for neo-pentylbromide.Ans. The structure of neo-pentylbromide is 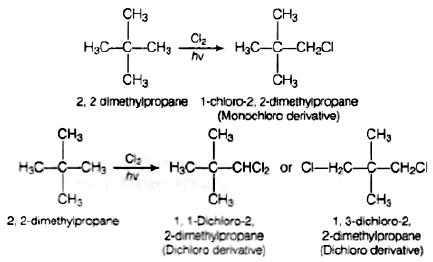 Q.61. Name the alkene which will yield 1-chloro-1-methylcyclohexane by its reaction with HCl. Write the reactions involved.Ans. Two alkenes are possible

Addition takes place in accordance with Markownikoff's rule i.e., negative part of the adding molecule will get attached to that carbon which has lesser number of hydrogen atom.Q.62. Which of the following haloalkanes reacts with aqueous KOH most easily?Explain giving reason.(i) 1-Bromobutane(ii) 2-Bromobutane(iii) 2-Bromo-2-methylpropane(iv) 2-ChlorobutaneAns. 2-Bromo-2-methylpropane

will react the aqueous KOH most easily because the corbocation formed during hte reaction is tertiary and most stable.

Q.64. Which of the following compounds would undergo SN1 reaction faster and why?(A)

Hence, allyl chloride undergoes hydrolysis much faster than n-propyl chloride.Q.66. Why is it necessary to avoid even traces of moisture during the use of  a Grignard reagent?Ans. Grignard reagents are highly reactive and react with water to give corresponding hydrocarbons.

(ii) Bayer's test When alkaline solution of KMnO4 is added to the solution of unsaturated compound then its pink colour disappears due to the formation of dihydroxy derivative.

Q.69. Diphenyls are potential threat to the environment. How are these produced from arylhalides?Ans. In environment, diphenyl is formed during the incomplete combustion of mineral oil and coal. It is present in the exhaust gases of vehicles and in exhaust air from residential and industrial heating devices,Acute exposure to high levels of biphenyl has been observed to cause eye and skin irritation and toxic effects on the liver, kidneys and central /peripheral nervous system. Kidneys of animals are also affected due to the ingestion of biphenyls. In rats, fetofoxicity has been oserved if they are exposed to high levels of biphenyl.Preparation of diphenyls from aryl halides

Aryl halides, when treated with sodium in dry ether give diphenyl. This reaction is named as Fittig reaction.Q.70. What are the IUPAC names of the insecticide DDT and benzene hexachloride? Why is their use banned in India and other countries?Ans. The IUPAC name of DDT is 2,2-bis (4-chlorophenyl)-1,1,1-trichloroethane and that of benzene hexachloride is 1,2,3,4,5,6-hexachlorocyclohexane.They are banned in India because they are non-biodegradable. Instead, they get deposited and stored in fatty tissues. If this ingestion continues at a steady rate, DDT builds up within the animal over time. This will affect the reproductive system of animals.If animals including humans are exposed to high levels of benzene hexachloride then it may cause acute poisoning. Apart from that this BHC may affect liver functioning in humans.