The document NCERT Exemplar - Is Matter Around Us Pure (part-3) Class 9 Notes | EduRev is a part of the Class 9 Course Science Class 9.
All you need of Class 9 at this link: Class 9

Q.1. Fractional distillation is suitable for separation of miscible liquids with a boiling point difference of about 25 K or less. What part of fractional distillation apparatus makes it efficient and possess an advantage over a simple distillation process. Explain using a diagram.Ans. Fractionating column packed with glass beads gives the effect of repeated distillation. It provides surface for vapours to come in contact with glass beads and lose energy so that they can condense easily and get distilled. The effectiveness increases with increase in length and number of glass beads in the fractionating column. 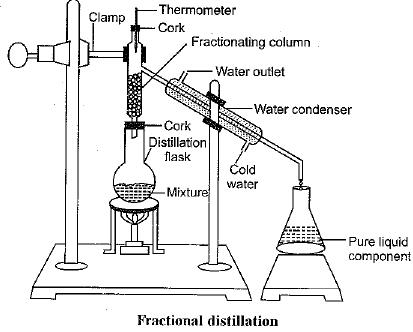 Q.2. (a) Under which category of mixtures will you classify alloys and why? (b) A solution is always a liquid. Comment. (c) Can a solution be heterogeneous?Ans. (a) Homogeneous mixture because they have same composition throughout.(b) No, solution may involve solids and gases also, e.g. alloys are solution of solid in solid. Air is solution of gases in gases.(c) No, solution cannot be heterogeneous. It is homogeneous mixture of two or more substances.Q.3. Iron filings and sulphur were mixed together and divided into two parts, ‘A’ and ‘B’. Part ‘A’ was heated strongly while Part ‘B’ was not heated. Dilute hydrochloric acid was added to both the parts and evolution of gas was seen in both the cases. How will you identify the gases evolved?Ans. In A compound formed FeS will react with dilute acid to form H2S gas which has smell of rotten eggs and will turn lead acetate paper black.

‘B’ is a mixture of iron filings and sulphur powder. Iron filing reacts with dil. HCl to form H2(g) which bums with a ‘pop’ sound if burning matchstick is brought near itFe(s) + 2HCl (dil.)→ FeCl2(aq) + H2(g)Q.4. A child wanted to separate the mixture of dyes constituting a sample of ink. He marked a line by the ink on the filter paper and placed the filter paper in a glass containing water as shown in figure. The filter paper was removed when the water moved near the top of the filter paper

Separation of dyes in black ink using chromatography(i) What would you expect to see, if the ink contains three different coloured components ?(ii) Name the technique used by the child. (iii) Suggest one more application of this technique

Ans. (i) Three different coloured bands will be formed.(ii) Chromatography(iii) To separate the pigments present in coloured flowers, ink and chlorophyll.Q.5. A group of students took an old shoe box and covered it with a black paper from all sides.They fixed a source of light (a torch) at one end of the box by making a hole in it and made another hole on the other side to view the light. They placed a milk sample contained in a beaker/tumbler in the box as shown in the figure. They were amazed to see that milk taken in the tumbler was illuminated. They tried the same activity by taking a salt solution but found that light simply passed through it?

(a) Explain why the milk sample was illuminated. Name the phenomenon involved. (b) Same results were not observed with a salt solution. Explain. (c) Can you suggest two more solutions which would show the same effect as shown by the milk solution ?Ans. (a) Milk is colloidal solution and its particles scatter light and cause Tyndall effect, therefore it gets illuminated.(b) It is because salt solution is true solution, particles are small and do not scatter light and do not show Tyndall effect.(c) Blood, soap solution, egg-albumin in water, sulphur sol, etcQ.6. Classify each of the following, as a physical or a chemical change. Give reasons.(a) Drying of a shirt in the sun.(b) Rising of hot air over a radiator.(c) Burning of kerosene in a lantern.(d) Change in the colour of black tea on adding lemon juice to it.(e) Churning of milk cream to get butter.Ans. (a) Physical change(b) Physical change(c) Chemical change(d) Chemical change(e) Physical changeQ.7. During an experiment the students were asked to prepare a 10% (Mass/Mass) solution of sugar in water. Ramesh dissolved 10 g of sugar in 100 g of water while Sarika prepared it by dissolving 10 g of sugar in water to make 100 g of the solution.(a) Are the two solutions of the same concentration.(b) Compare the mass % of the two solutions.Ans. (a) No, two solutions do not have the same concentration.(b) Mass percentage of solutions prepared by