The document NCERT Exemplar - Natural Resources Notes | Study Science Class 9 - Class 9 is a part of the Class 9 Course Science Class 9.
All you need of Class 9 at this link: Class 9

Q1. How do fossil fuels cause air pollution?

Ans: When we burn fossil fuels carbon dioxide, nitrous oxide and other chemicals are released which increase the greenhouse effect and contribute to global warming. Nitrous oxide forms smog and results in acid rain. 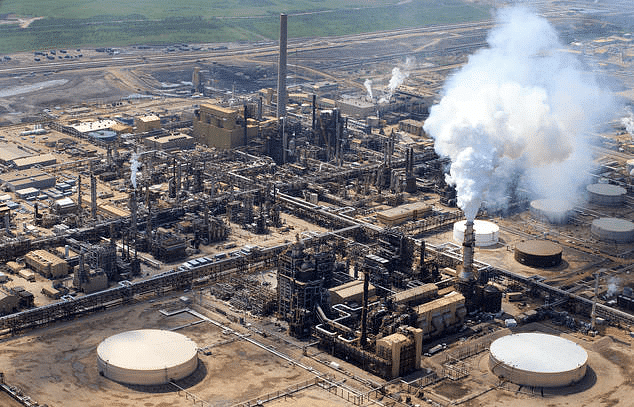 Fossil Fuels cause Air PollutionQ2. How can we prevent the loss of topsoil?Ans: Loss of topsoil can be prevented by:

Q4. During summer, if you go near the lake, you feel relief from the heat, why?Ans: Air above the land gets heated up during the day and starts rising and creates a region of low pressure. But the lake does not get heated so quickly and thus, the air above the surface of the lake moves to fill the area above the land. Therefore, a cold breeze flows from lake to land during summer days, gives relief to people standing near the lake.Q5. In coastal area, wind current moves from the sea towards the land during day; but during the night it moves from land to the sea. Discuss the reason.Ans: During the day, the air above the land gets heated quickly and starts rising. This creates a region of low pressure, as a result, the air above the sea rushes in to fill this area of low pressure. This movement of air from one region to the other creates winds.But at night, air over the land cools down fast but the air over sea cools slowly and hence remains hot. This creates low pressure over the sea and air moves from land to sea, which cause wind.Q6. Following are a few organisms:(a) lichen(b) mosses(c) mango tree(d) cactusWhich among the above can grow on stones; and also help in the formation of soil? Write the mode of their action for making soil.Ans: (a) Lichens and (b) Mosses can grow on stones.Lichens and mosses release substances which break down the stones resulting in the formation of soil. The mode of action here is chemical.Q7. Soil formation is done by both abiotic and biotic factors. List the names of these factors by classifying them as abiotic and biotic?Ans: Abiotic factors — Sun, water, wind.

Biotic factors — Lichens, mosses, trees, shrubs and herbs.Q8. All the living organisms are basically made up of C, N, S, P, H and O. How do they enter the living forms? Discuss.Ans: The inorganic substances enter plants through the process of photosynthesis. The inorganic substances enter plants from the air (C02) and water as ions by absorption of roots from the soil. Herbivores eat these plants as food. Carnivores eat herbivores for survival. Thus, all organisms are basically made up of C, N, S, P, H and O which pass from plants to other organisms.Q9. Why does the percentage of gases like oxygen, nitrogen and carbon dioxide remain almost the same in the atmosphere?Ans: Gases maintain consistency in the atmosphere through biogeochemical cycling where there is repeated circulation of biogenetic nutrients between biotic and abiotic components of the environment.Q10. Why does the moon have very cold and very hot temperature variations, i.e. from - 190°C to 110°C even though it is at the same distance from the sun as the earth?Ans: Due to the absence of atmosphere on the moon, it gets heated up as soon as sun rays fall on its surface and cool down immediately when there is no sunlight.Q11. Why do people love to fly kites near the seashore?Ans: Due to the regular unidirectional wind from sea to land, it helps the kite to fly high and the wind also provides comfort by making the seashore cool during the daytime.Q12. Why does Mathura refinery pose problems to the Taj Mahal?Ans: Mathura refinery releases toxic gas (like oxides of sulphur) which causes acid rain and hence causes corrosion of the marbles of Taj Mahal. Thus, the Mathura refinery poses a problem to the Taj Mahal.Q13. Why do lichens not occur in Delhi whereas, they commonly grow in Manali or Darjeeling?Ans: Lichen is a bio-indicator and sensitive to S02 pollution from automobiles. Delhi has maximum number of automobiles, hence has a highly polluted environment. But in Manal and Darjeeling, the atmosphere is humid and sulphur dioxide pollution is low and so lichens grow there easily.Q14. Why does water need conservation even though large oceans surround the landmasses?Ans: Marine water is unfit for human and plant consumption. So, terrestrial organisms have to depend on freshwater resources. Therefore, limited freshwater resources need conservation to cater to the demands.Q.15. There is mass mortality of fishes in a pond. What may be the reasons?Ans: There is mass mortality of fishes in a pond because of:

Q17. Fertile soil contains humus which is useful to soil and plants. Why?Ans: Fertile soil has lots of humus Because:

Q18. Why step farming is common in hills?Ans: Step farming is common in hills to slow down the speed of rainwater currents and increasing the water absorption by soils. This is practised to check soil erosion through water currents on the slopes.Q19. Why are root nodules useful for plants?Ans: Root nodules occur in legume plants. In root nodules, nitrogen-fixing Rhizobium bacteria are present which increases soil fertility. These bacteria pick up nitrogen from the soil and convert it into an organic compound. The roots absorb the organic compound and it is passed into plants and so legume plants become rich in proteins and other nitrogen compounds.

Q20. Lichens are called pioneer colonisers of bare rock. How can they help in the formation of soil?

Ans: Lichens release enzymes that break the rock into smaller pieces and helps in the formation of soil.

Q21. How do fossil fuels cause air pollution?Ans:

We can contribute to reducing water pollution as follows:

Q23. A motor car, with its glass totally closed, is parked directly under the sun. The inside temperature of the car rises very high. Explain why?Ans: Glass being transparent allows sunlight to pass through it, hence heating the interior of the car. Since heat waves cannot pass out of the glass, so the heat trapped inside raises the temperature of the interior. This is because glass is transparent to infrared radiation coming from the sun that is having a shorter wavelength than that emitted by the interior of the car longer wavelength to which the glass is opaque. Therefore, heat from the can not move out.Q24. Justify “Dust is a pollutant”.Ans: Dust is a pollutant because:

Q25. Explain the role of the sun in the formation of soil.Ans: The role of the sun in the formation of soil is as follows: The rocks are heated by the sun during the daytime which makes them expand. At night after the sunset, the rocks cool down which makes them contract. This process of alternate expansion and contraction takes place every day which result in cracks in the rocks and ultimately breaks them down to smaller particles that form the soil.Q26. Carbon dioxide is necessary for plants. Why do we consider it as a pollutant?Ans: CO2 is considered a pollutant because the increasing concentration (more than normal) of CO2 is harmful. So, apart from CO2 being essential for photosynthesis, it is also a greenhouse gas. Higher concentrations of CO2 is one of the causes of the greenhouse effect and global warming.

The document NCERT Exemplar - Natural Resources Notes | Study Science Class 9 - Class 9 is a part of the Class 9 Course Science Class 9.
All you need of Class 9 at this link: Class 9