The document NCERT Exemplar - Oscillations (Part- 1) Notes | EduRev is a part of the JEE Course Physics Class 11.
All you need of JEE at this link: JEE

Q.1. The displacement of a particle is represented by the equation

Method 1: The displacement of the particle y = 3 cos

Velocity of the particle

It means the motion is SHM with period π/ω.Method 2: Given the equation of displacement of the particle

Q.2. The displacement of a particle is represented by the equation y = sin3ωt. The motion is(a) Non-periodic.(b) Periodic but not simple harmonic.(c) Simple harmonic with period 2π/ω.(d) Simple harmonic with period π/ω.Ans. (b)Solution.There are certain motions that are repeated at equal intervals of time. Let the the interval of time in which motion is repeated. Then x(t) =x(t + T), where T is the minimum change in time. The function that repeats itself is known as a periodic function. Given the equation of displacement of the particle, y = sin3ωtWe know sin 3θ = 3 sin θ - 4 sin3θHence

⇒ d2y/dt2 is not proportional to y.Hence, motion is not SHM.As the expression is involving sine function, hence it will be periodic.Also sin3ωt = (sin ωt)3= [sin(ωt + 2π)]3 = [sinω(t + 2π/ω)]3Hence, y = sin3ωt represents a periodic motion with period 2π/ω.Q.3. The relation between acceleration and displacement of four particles are given below:(a) ax = + 2x.(b) ax = + 2x2.(c) ax = – 2x2.(d) ax = – 2x.Which one of the particles is executing simple harmonic motion?Ans. (d)Solution.In case of simple harmonic motion, the acceleration is always directed towards the mean position and so is always opposite to displacement, i.e. a α = -x or a = -ω2x In option (d) ax = -2x or a α -x, the acceleration of the particle is proportional to negative of displacement. Hence it represents S.H.M. Q.4. Motion of an oscillating liquid column in a U-tube is(a) Periodic but not simple harmonic.(b) Non-periodic.(c) Simple harmonic and time period is independent of the density of the liquid.(d) Simple harmonic and time-period is directly proportional to the density of the liquid.Ans. (c)Solution.If the liquid in U-tube is filled to a height h and cross¬section of the tube is uniform and the liquid is incompressible and non- viscous. Initially the level of liquid in the two limbs will be at the same height equal to h. If the liquid is-pressed by y in one limb, it will rise by y along the length of the tube in the other limb, so the restoring force will be developed by hydrostatic pressure differenceRestoring force F = Weight of liquid column of height 2y

which is independent of the density of the liquid.Q.5. A particle is acted simultaneously by mutually perpendicular simple hormonic motions x = a cos ωt and y = a sin ωt . The trajectory of motion of the particle will be(a) An ellipse.(b) A parabola.(c) A circle.(d) A straight line.Ans. (c)Solution.If two S.H.M’s act in perpendicular directions, then their resultant motion is in the form of a straight line or a circle or a parabola etc. depending on the frequency ratio of the two S.H.Ms and initial phase difference. These figures are called Lissajous figures.Let the equations of two mutually perpendicular S.H.M’s of same frequency bex = a1 sin ωt and y = a2 sin( ωt + ϕ)Then the general equation of Lissajou's figure can be obtained as

This is a straight line which passes through origin and its slope is a2/a1.Lissajou's Figures in other conditions 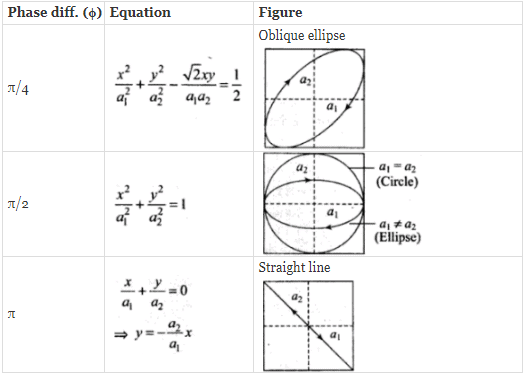 Q.7. Four pendulums A, B, C and D are suspended from the same 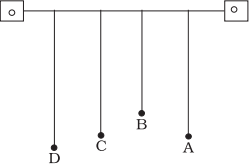 Q.8. Figure shows the circular motion of a particle. The radius of the circle, the period, sense of revolution and the initial position are indicated on the figure. The simple harmonic motion of the x-projection of the radius vector of the rotating particle P is 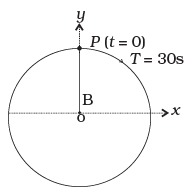 Ans. (a)
Solution.
Suppose a particle P is moving uniformly on a circle of radius A with angular speed. Q and R are the two feets of the perpendicular drawn from P on two diameters one along .Y-axis and the other along Y-axis. 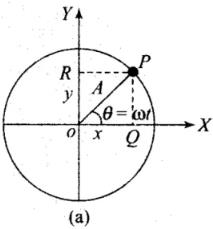 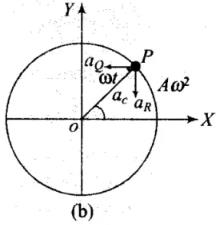 Suppose the particle P is on the X-axis at t = 0. Radius OP makes an angle with the X-axis at time t, then x = A cosωt and y = A sinωt
Here, x and v are the displacements of Q and R from the origin at time t, which are the displacement equations of SHM. It implies that although P is under uniform circular motion, Q and R are performing SHM about O with the same angular speed as that of P.
Let angular velocity of the particle executing circular motion is ω and when it is at P makes an angle θ as shown is the diagram. 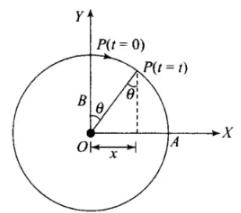 Ans. (b)
Solution.
When a mass (m) is connected to a spring on a horizontal frictionless surface then their frequencies are

Now, the spring are in parallel because one end of both spring are connected with rigid body and other end to body. So their equivalent spring constant becomes kP = K1 + K2
And frequency

Hence, verifies the option (b). 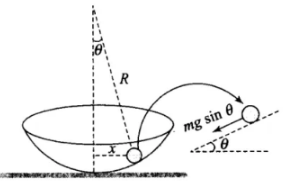 Q.14. Displacement vs. time curve for a particle executing S.H.M is shown in figure. Choose the correct statements.

Q.15. Which of the following statements is/are true for a simple harmonic oscillator?
(a) Force acting is directly proportional to displacement from the mean position and opposite to it.
(b) Motion is periodic.
(c) Acceleration of the oscillator is constant.
(d) The velocity is periodic.
Ans. (a, b, d)
Solution.
Consider a SHM x = a sin ωt. ...(i)

Q.16. The displacement time graph of a particle executing S.H.M is shown in figure. Which of the following statement is/are true?

Let us write the equation for the SHM x = a sin ωt.
Clearly, it is a periodic motion as it involves sine function.
Let us find velocity of the particle,

Mean velocity over a complete cycle,

Q.18. A particle is in linear simple harmonic motion between two points A and B, 10 cm apart. Take the direction from A to B as the + ve direction and choose the correct statements.

Q.2. Two identical springs of spring constant K are attached to a block of mass m and to fixed supports as shown in Fig. When the mass is displaced from equilibrium position by a distance x towards right, find the restoring force 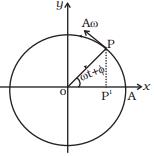 Ans. As the particle on reference circle moves in anti-clockwise direction. The projection will move from P’ to O towards left, i.e. from right to left, hence sign is negative. 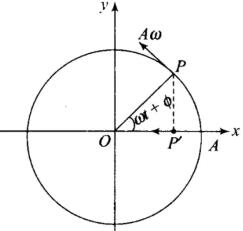 Which is a constant and independent of x.
Plotting under the above guidelines KE, PE and TE versus displacement x-graph as follows:

where, l = length of the pendulum and
g = acceleration due to gravity on surface of the earth.
Thus,