The document NCERT Exemplar - Oscillations (Part- 2) Notes | EduRev is a part of the JEE Course JEE Revision Notes.
All you need of JEE at this link: JEE

Q.1. Find the time period of mass M when displaced from its equilibrium positon and then released for the system shown in Figure. 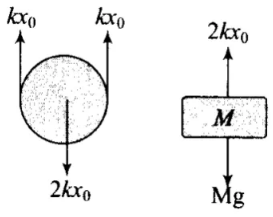 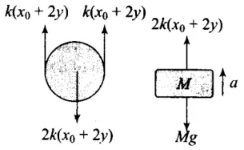 K and M being constant.∴ a ∝ -x. Hence, motion is SHMComparing the above acceleration expression with standard SHM equation a = -ω2x, we get Q.1. A person normally weighing 50 kg stands on a massless platform which oscillates up and down harmonically at a frequency of 2.0 s-1 and an amplitude 5.0 cm. A weighing machine on the platform gives the persons weight against time.(a) Will there be any change in weight of the body, during the oscillation?(b) If answer to part (a) is yes, what will be the maximum and minimum reading in the machine and at which position?Ans. (a) Weight in weight machine will be due to the normal reaction (N) by platform. Consider the top position of platform, two forces due to weight of person and oscillator acts both downward.

which does not depend on amplitude2mg/k = x from (i)

Oscillator will not rise above the positive from where it was released because total extension in spring is 4 cm when released and amplitude is 2 cm. So it oscillates below the released position.Q.3. A cylindrical log of wood of height h and area of cross-section A floats in water. It is pressed and then released. Show that the log would execute S.H.M. with a time period.

where m is mass of the body and ρ is density of the liquid.Ans. When log is pressed downward into the liquid then and upward Buoyant force (B.F.) action it which moves the block upward and due to inertia it moves upward from its mean position due to inertia and then again come down due to gravity. So net restoring force  on block = Buoyant force – mg

Q.4. One end of a V-tube containing mercury is connected to a suction pump and the other end to atmosphere. The two arms of the tube are inclined to horizontal at an angle of 45° each. A small pressure difference is created between two columns when the suction pump is removed. Will the column of mercury in V-tube execute simple harmonic motion? Neglect capillary and viscous forces. Find the time period of oscillation.Ans. Consider the liquid in the length dx . It’s mass is A ρdx at a height x.PE = A ρdx gxThe PE of the left column

Similarly, P.E. of the right column

Q.5. A tunnel is dug through the centre of the Earth. Show that a body of mass ‘m’ when dropped from rest from one end of the tunnel will execute simple harmonic motion.Ans. Acceleration due to gravity at P = g.x/R, where g is the acceleration at the surface.Force = mgx/R = -k.x, k = mg/RMotion will be SHM with time period

Q.6. A simple pendulum of time period 1 second and length l is hung from a fixed support at O, such that the bob is at a distance H vertically above A on the ground (Figure).  The amplitude is θ0. The string snaps at θ = θ0/2. Find the time taken by the bob to hit the ground. Assume θ0 to be small so that sinθ0 θ0 and cosθ0 l. Thus the linear velocity is

The distance travelled in the x direction is uxt to the left of where it snapped.