Q.1. Various materials which are obtained from nature are called natural resources. Which of the following is not a natural resource?(a) minerals(b) water(c) soil(d) plasticAns: dExplanation:Minerals, water and soil are natural resources whereas plastic is a man-made substance.

Q.4. Coal is processed in industries to get some useful products. Which of the following is not obtained from coal?(a) coke(b) coal tar(c) coal gas(d) CNGAns: dExplanation:CNG is compressed natural gas which is made by compressing the natural gas. CNG is a petroleum product whereas coke, coal tar and coal gas are obtained from coal.

Q.8. Which substance is formed by the carbonisation of dead vegetation?.(a) coal(b) coke(c) coal gas(d) coal tarAns: aExplanation:The formation of coal occurs over millions of years via a process known as carbonation. In this process, dead vegetation is converted into carbon-rich coal under very high temperature and pressure.

Ans: Kerosene is the petroleum product used as fuel for stoves, lamps and jet aircrafts.

Ans:(a) Coal is one of the fuels used to cook food.(b) When heated in air, coal burns and produces mainly Carbon-di-oxide gas.(c) Coal tar is a black, thick liquid with an unpleasant smell.(d) Petroleum, Coal and natural gas are fossil fuels.(e) Forests and coal are exhaustible natural resources.

Explanation: Resources which are present in unlimited quantity in nature are called inexhaustible natural resources.

Ans: Sunlight and air are present in unlimited quantity in nature and are not likely to be exhausted by human activities or by any other means. Hence Sunlight and the air are inexhaustible natural resources. 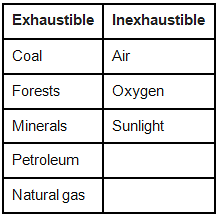 Q.10. Write the characteristics and some important uses of coal.Ans:

Q.11. Look at Figure where petroleum and natural gas deposits are shown. Why do we find the oil layer above the water layer? 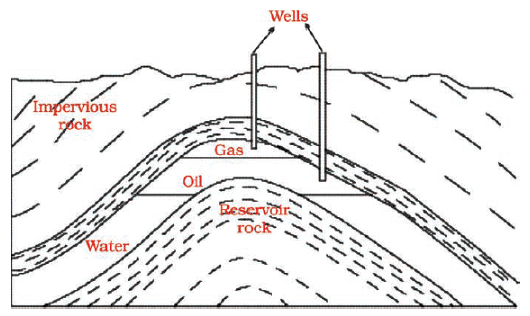 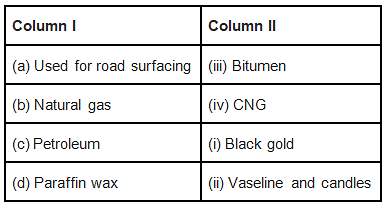 Q.3. We read in newspapers that burning of fuels is a major cause of global warming. Explain why?Ans: Burning of fuels leads to release of carbon-di-oxide, carbon-monoxide and SO2 gases. These are the greenhouses gases that not only increases air pollution but also contribute to global warming by trapping radiations from the sun.

Q.6. Why petrol is an exhaustible natural resource, whereas sunlight is not? Explain.Ans: Petrol is a fossil fuel, which is produced after years of decomposition of buried and plants deep down the earth. For producing petrol we need millions of years. If we use petrol higher than the requirement, it will get exhausted. Whereas the sun is a continuous and unlimited source of energy. Sun is a renewable resource of energy which will not get exhausted.

Q.7. Write some important uses of the various constituents of petroleum. 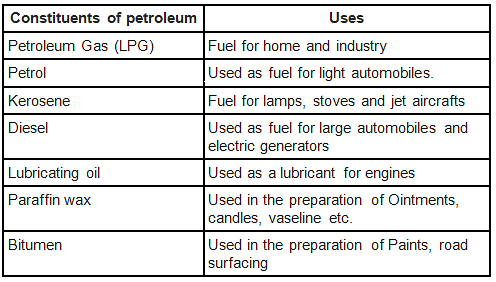 Q.10. Complete the crossword Figure with the help of the clues: 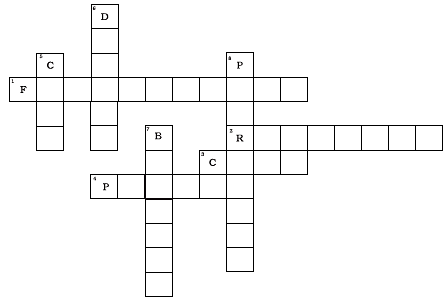 1. Fuels obtained form dead remains of living organisms. (6,5)2. A process by which the various constituents of petroleum are separated. (8)3. A porous black substance obtained form of coal. (4)4. Another name for motor fuel. (6)

Down5. The substance obtained by carbonisation. (4)6. Fuel for heavy motor vehicles. (6)7. A petroleum product used for road surfacing. (7)8. Dead remains of sea animals got converted into it. (9)Ans: 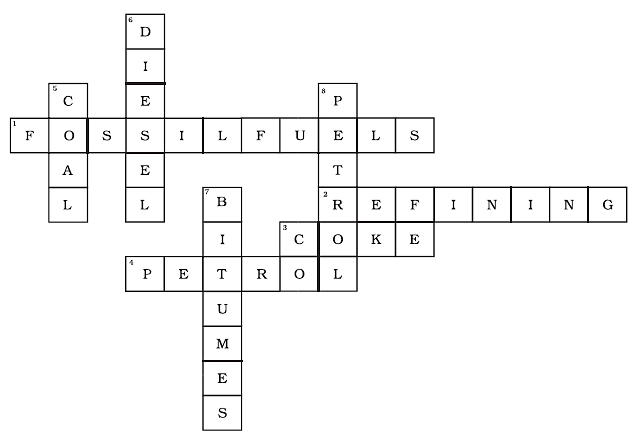 The document NCERT Exemplar Solutions: Coal & Petroleum Notes | Study Science Class 8 - Class 8 is a part of the Class 8 Course Science Class 8.
All you need of Class 8 at this link: Class 8
Join Course