The document NCERT Exemplar Solutions: Electric Current & Its effects Notes | Study Science Class 7 - Class 7 is a part of the Class 7 Course Science Class 7.
All you need of Class 7 at this link: Class 7

Q.1. When an electric current flows through a copper wire AB as shown in Figure,  the wire 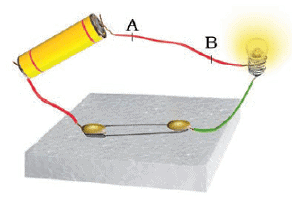 (a) deflects a magnetic needle placed near it.(b) becomes red hot.(c) gives an electric shock.(d) behaves like a fuse.Ans: aExplanation:A current-carrying wire acts as a magnet with a magnetic field around it, the strength of which depends upon the amount of current passing through it.

In case of electric fuse, there is only a maximum limit on the current which can safely flow in the electric circuits.

Ans: cExplanation:All the bulbs will glow simultaneously as there is no lag time in the flow of current through the circuit.

Q.5. Paheli does not have a night lamp in her room. She covered the bulb of her room with a towel in the night to get dim light. Has she taken the right step? Give one reason to justify your answer.Ans: No, Steps taken by Paheli are wrong as towel may get burned due to heat produced by the bulb and also glowing bulb unnecessarily will waste the energy.

Q.7. Why is an electric fuse required in all electrical appliances?Ans: An electric fuse is required for it acts as a safety device and it checks excessive current flow.

Q.3. Why do we cover plug pinholes which are within the reach of children with cellotape or a plastic cover when not in use?Ans: Because the child may put his/her fingers into the socket which results in electric shock which may be fatal.

Q.1. Your teacher has shown you the following activity. 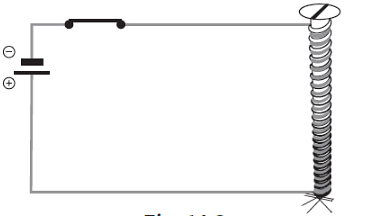 Activity: Teacher has wound a long insulated piece of wire around an iron nail in the form of a coil. Free ends of the wire are connected to a cell through a switch as shown in Figure. The current is switched on and some pins are placed near the ends of the nail.Write down any three questions that come to your mind about this activity.

Q.2. Paheli took a wire of length 10 cm. Boojho took a wire of 5 cm of the same material and thickness. Both of them connected the wires as shown in the circuit given in Figure. The current flowing in both circuits is the same. 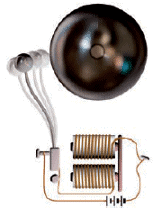 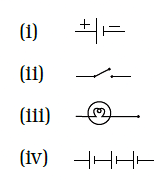 The document NCERT Exemplar Solutions: Electric Current & Its effects Notes | Study Science Class 7 - Class 7 is a part of the Class 7 Course Science Class 7.
All you need of Class 7 at this link: Class 7