The document NCERT Exemplar Solutions: Materials : Metals & Non-metals Notes | EduRev is a part of the Class 8 Course Science Class 8.
All you need of Class 8 at this link: Class 8

Q.2. The substance that will be flattened on beating with a hammer is(a) Crystal of iodine(b) Lump of sulphur(c) Piece of coal(d) Zinc granuleAns: dExplanation:Metals can be beaten into thin sheets whereas non-metals break into pieces on hitting hence answer is (d) zinc granule.

Q.3. Boojho has learnt that non-metals on beating with a hammer are generally broken into pieces. Which of the following is a nonmetal?(a) Iron nail(b) Aluminium wire(c) Copperplate(d) Piece of coalAns: dExplanation:Iron, Copper and aluminium are metals whereas coal is a non-metal hence answer is (d) piece of coal.

Q.4. Materials which can be drawn into wires are called ductile. Which of the following is not a ductile material?(a) Silver(b) Copper(c) Sulphur(d) AluminiumAns: cExplanation:Ductility is the property of metals. Here Sulphur is non-metal which is not have ductile property.

Q.5. Metals are generally hard. Which of the following metals is an exception and can be cut with a knife?(a) Iron(b) Sodium(c) Gold(d) MagnesiumAns: bExplanation:Sodium is highly reactive metals which looks soft and can be cut into pieces by using a knife.

Q.8. Which of the following reacts with cold water vigorously?(a) Carbon(b) Sodium(c) Magnesium(d) SulphurAns: bExplanation:Sodium reacts vigorously with water, hence it is stored in kerosene to avoid reaction of sodium with moisture in the atmosphere and oxygen.

Q.11. Generally, metallic oxides are basic and non-metallic oxides are acidic in nature.The solution of which of the following oxides in water will change the colour of blue litmus to red?(a) Sulphur dioxide(b) Magnesium oxide(c) Iron oxide(d) Copper oxide

Explanation:Sulphur forms Sulphur-di-oxide which is acidic in nature and it will convert blue litmus to red.

Q.12. Which of the following property is not responsible for copper to be used as electrical conduction wires?(a) Ductility(b) Colour(c) Good conductor of electricity(d) It is solidAns: b

Q.1. Name two soft metals which can be cut with a knife.Ans: (i) Sodium (ii) Potassium

Q.2. Which non-metal is essential for our life and all living beings inhale it during breathing?Ans: Oxygen.

Q.3. Name two major non-metals which are present in fertilisers and enhance the growth of plants.Ans: (i)Nitrogen (ii) Phosphorus

Q.4. Which non-metal is used to disinfect water?Ans: Chlorine.

Q5. A purple coloured non-metal form a brown solution in alcohol which is applied on wounds as an antiseptic. Name the nonmetal.Ans: Iodine.

Q.6. Zinc sulphate forms a colourless solution in water. Will you observe any colour on adding copper turning in it?Ans: There will be no change as displacement reaction will not take place.

Q.7. Why are bells made of metals?Ans: Metals show the sonorous property, hence they are used in making bells.

Q.8. Which liquid metal is used for making thermometers?Ans: Mercury.

Q.9. Which of the following metals can displace the other two metals from their salt solutions?Ans: Zinc.

Q.1. Paheli bought a statue made of copper. To her surprise, it acquired a dull green coating after a couple of months. Explain the reason.Ans: The green coating on the copper statue is the mixture of CU(OH)2 and CUCO3 which are formed due to reaction of moisture and copper.

Q.2. In Figure you find that the bulb glows when an iron nail is placed between two ends of the wire. Complete the following sentences on the bases of this fact. 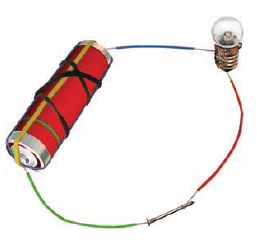 Q.4. Paheli prepared a blue coloured solution of copper sulphate in beaker A and placed an iron nail in it. Boojho prepared a yellowish-green solution of ferrous sulphate in beaker B and placed a copper wire in it. What changes will they observe in the two beakers after an hour?Ans: In beaker A, a reddish-brown layer of copper will deposit on the iron nail and the blue coloured solution will become yellowish-green. On the other hand, no change is observed in beaker B.

Q.6. Match the substances in Column A with their applications given in Column B. 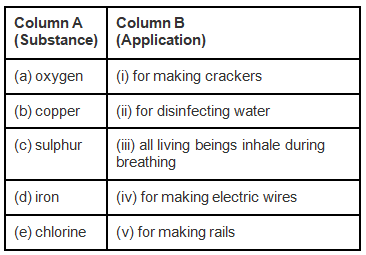 Q.7. Some of the following statements are incorrect. Find the incorrect statements and correct them.(a) The property of metals by virtue of which they can be drawn into wires is called ductility.(b) Metals are good conductor of electricity but poor conductor of heat.(c) Articles made of metals produce ringing sound when struck hard.(d) Oxides of non-metals and metals are acidic in nature.(e) A less reactive metal replaces a more reactive metal from its salt solution in water.Ans: Statement b) d) and e) are wrong statementsb) Metals are good conductors of electricity as well as heat.d)Oxides of non-metals are acidic in nature and oxides of metals are basic in nature.e) A more reactive metal replaces a less reactive metal from its salt solution in water.

Q.8. Iron is more reactive than copper. Can you write an activity to show this?Ans: Q.10. Find out the names of three metals and three non-metals from the box given as Figure. 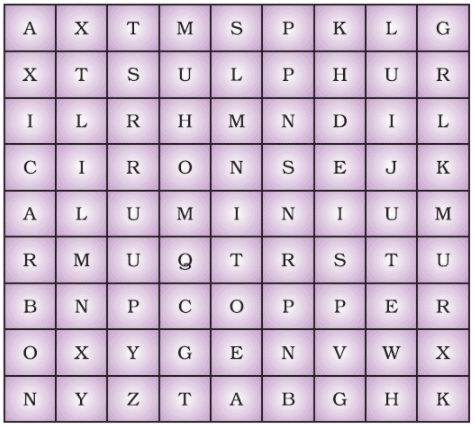 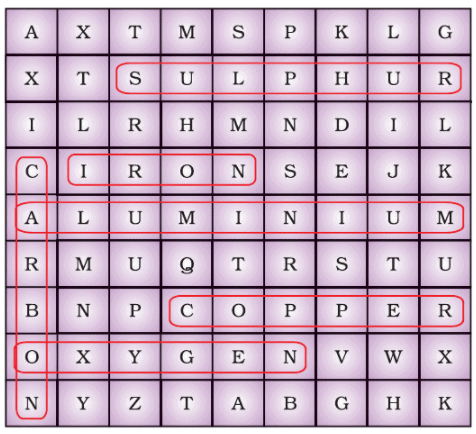 Q.11. Complete the crossword given in Figure with the help of the clues. 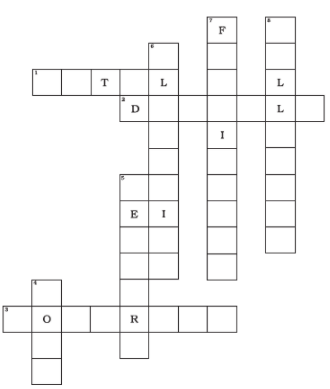 Across1. Which is generally hard, ductile, malleable and sonorous.2. A metal is called so it can be drawn into wires.3. Metal bells are used because of this property.

Down4. A metal generally used for making jewellery.5. A metal which is liquid at room temperature.6. A metal which reacts with acid as well as base to form hydrogen gas.7. Substances used to enhance the growth of plants.8. Property by virtue of which metals can be beaten into thin sheets. 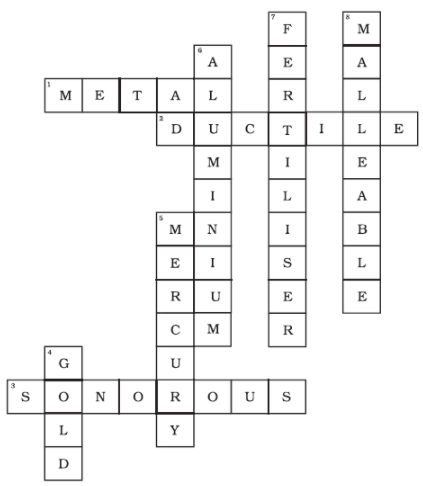 The document NCERT Exemplar Solutions: Materials : Metals & Non-metals Notes | EduRev is a part of the Class 8 Course Science Class 8.
All you need of Class 8 at this link: Class 8
All Tests, Videos & Notes of Class 8: Class 8