The document NCERT Exemplar Solutions: Motion and Measurement of Distances Notes | Study Science Class 6 - Class 6 is a part of the Class 6 Course Science Class 6.
All you need of Class 6 at this link: Class 6 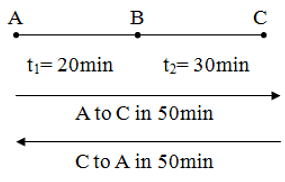 Q.6. Bholu and Golu are playing in a ground. They start running from the same point A in the ground and reach point B at the same time by following the paths marked 1 and 2 respectively as shown in figure. Which of the following is/are true for the given situation? 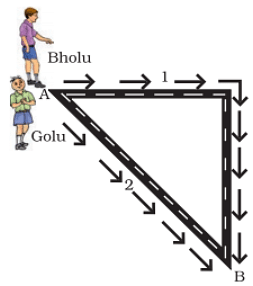 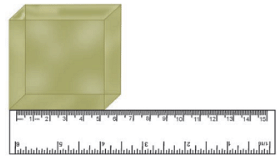 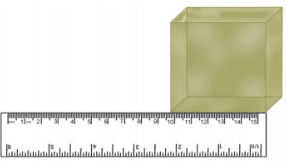 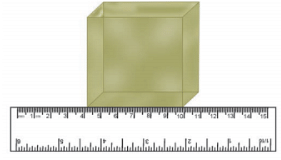 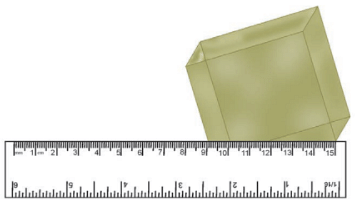 Ans: cSolution: Object should be placed on a scale such that its ends lie in between the readings marked on the scale.Q.9. You are provided three scales A, B and C as shown in figure to measure a length of 10 cm. 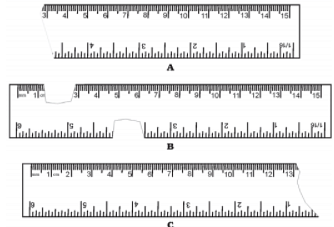 For the correct measurement of the length you will use the scale(a) A only(b) B only(c) C only(d) Any of the three Scales.Ans: dSolution: Length of 10 cm is available in all the three scales A, B and C. So, any of the three scales’ can be used.Q.10. Correct the following:(i) The motion of a swing is an example of rectilinear motion.(ii) 1m = 1000cmAns: (i) No, the motion of a swing is not an example of rectilinear motion. The motion of a swing is an example of periodic motion as it repeats its motion after a fixed interval of time.(ii) 1m = 100 cm. Each metre (m) is divided into 100 equal divisions, called centimetre (cm).Q.11. Fill in the blanks.(i) Motion of an object or a part of it around a fixed point is known as ______ motion.(ii) A body repeating its motion after certain interval of time is in ______ motion.(iii) In rectilinear motion, object moves a ______ line ______ .(iv) SI unit of length is ______ .Ans: (i) Circular(ii) periodic(iii) along; straight(iv) metreQ.12. Write one example for each of the following type of motion.(i) Rectilinear(ii) Circular(iii) Periodic(iv) Circular and periodicAns: (i) Rectilinear – An apple falling vertically downwards.(ii) Circular – The motion of a point marked on the hands of a clock.(iii) Periodic – Motion of a child on a swing.(iv) Circular and periodic – Blades of a rotating fan. 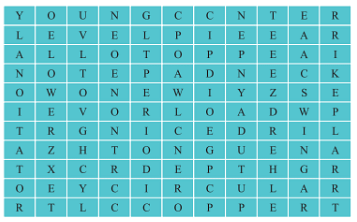 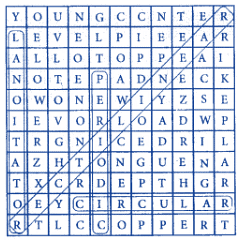 Ans: Here is the correct match:

Q.17. While travelling in a train, it appears that the trees near the track are moving whereas co-passengers appear to be stationary. Explain the reason.Ans: While sitting in a moving train, the trees appear to be moving in the opposite direction because their position is changing with respect to us. While the position of co-passengers appears to be in a stationary position since they are not changing with respect to us.Q.18. How are the motions of a wheel of a moving bicycle and a mark on the blade of a moving electric fan different? Explain.Ans: The wheels of a moving bicycle indicate circular as well as rectilinear motion.Wheels of bicycle rotate on the ground which in turn moves the bicycle forward.A blade of a moving electric fan shows only circular motion as it is not moving from one place to another.Q.19. Three students measured the length of a corridor and reported their measurements. The values of their measurements were different. What could be the reason for difference in their measurements? (Mention any three)Ans: Some reasons for the difference in their measurement could be(i) The measurement may not be along the shortest length in all three cases.(ii) The measuring devices may not be standard.(iii) Different measuring devices were used.(iv) The end of the corridor may not be easily accessible.(v) The smallest length that could be measured by different devices may be different.Q.20. Boojho was riding in his bicycle along a straight road. He classified the motion of various parts of the bicycle as(i) rectilinear motion(ii) circular motion and(iii) both rectilinear as well as circular motion. Can you list one part of the bicycle for each type of motion? Support your answer with reason.Ans: (i) Rectilinear motion: Handle of the bicycle has rectilinear motion. It moves in a straight line as the wheels of bicycle move forward.(ii) Circular motion: Pedal of the bicycle is having circular motion it rotates with its shaft but does not move from its place.(iii) Rectilinear and circular motion: Wheel of the moving bicycle is having both circular and rectilinear motion. Wheels rotate on their shafts as well as move forward on the ground.

The document NCERT Exemplar Solutions: Motion and Measurement of Distances Notes | Study Science Class 6 - Class 6 is a part of the Class 6 Course Science Class 6.
All you need of Class 6 at this link: Class 6