Q.3. In the list of animals given below, the hen is the odd one out.

Q.5. Reproduction by budding takes place in(a) hydra(c) paramecium(b) amoeba(d) bacteriaAns: aExplanation:Paramecium, Amoeba and bacteria reproduce by binary fission. Hydra reproduces by budding where a bud detaches from the parent which grows into a complete organism.

Q.7. In human beings, after fertilisation, the structure which gets embedded in the wall of uterus is(a) ovum(b) embryo(c) foetus(d) zygoteAns: bExplanation:Egg fuses with sperm to form the zygote which will divide to form a clump of hundreds of cells which form the embryo. The process of moving down embryo from oviduct into the uterus is called as implantation.

Q.9. After fertilisation, the resulting cell which gives rise to a new individual is the(a) embryo(b) ovum(c) foetus(d) zygoteAns: dExplanation:The zygote is the beginning of the formation of a new individual. All the multicellular organisms start their life from single-celled zygote.

Q.1. Although 2 cells called gametes fuse, the product formed is a single cell called the zygote. Justify.Ans: During fertilization, only the nucleus of the sperm gets implanted into the uterus to form a zygote. Then sperm degenerates. Hence fused cell is called gamete.Stages in the lifecycle of silkworm are given below. Write them in sequential order.

Q.2. Stages in the lifecycle of silkworm are given below. Write them in sequential order.pupa, silkworm, egg, silkmothAns:

Q.3. What is the importance of reproduction?Ans: Reproduction ensures the continuation of species from generation to generation.

Q.4. In markets, eggs of birds are available but never eggs of dogs. Why?Ans: Because the dog is viviparous. It does not lay an egg. It gives birth to a new one.

Q.1. Fill up the blanks with the terms given below:

Q.2. The term metamorphosis is not used while describing human development. Why?Ans: Because body parts of humans will be present by birth. Whereas in metamorphosis parts of adults are different from the young ones.

Q.4. How is reproduction in hydra different from that in amoeba?Ans: Hydra reproduces by budding where a bud detaches from the parent which grows into a complete organism. Whereas amoeba reproduces by binary fission. The process of reproduction begins with the division of its nucleus into two. This is followed by the division of its body into two.

Q.5. State whether the following statements are True or False. If false, correct the statement:(a) External fertilisation can occur both in water and on land.(b) The eggs of fish are covered by hard shells for protection.(c) The human egg has a head, middle piece and tail.(d) In adult human females, a single mature egg is released into an oviduct every month.Ans:

Q.6. Why do only male gametes have a tail?Ans: Because sperm need to be motile to reach the non-motile egg in the ovary of the female.

Q.7. What does Figure represent?

Ans: The figure shows Binary fission of amoeba with a dividing nucleus.

Q.8. Observe the figure given as Figure and answer the questions that follow. 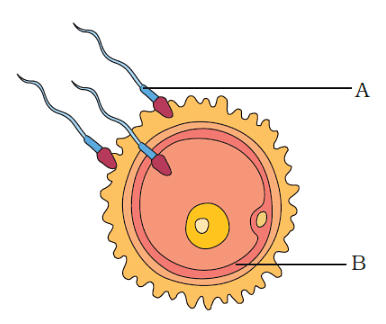 Q.1. How can we say that fish exhibits external fertilisation?Ans: Female fish releases eggs into the water and male fish releases sperm into the water. Sperm swim randomly in water to reach the egg. The nucleus of the sperm reaches the egg and fuses to form the zygote. Since fertilization takes place externally. It is called external fertilization. 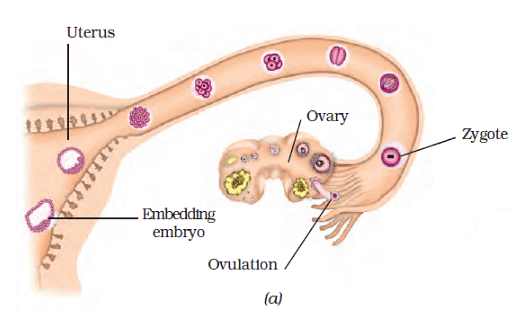 a) Read the following statements and label them in the figure:

b) Explain the future development of the embryo that would take place after it gets embedded in the uterus.Ans: Developing embryo gets embedded in the wall of the uterus for further development. The embryo continues to develop in the uterus. It gradually develops body parts such as hands, legs, head, eyes, ears etc. The stage of the embryo in which all the body parts can be identified is called a foetus (Figure). When the development of the foetus is complete, the mother gives birth to the baby.

Q.3. Hens and frogs are both oviparous exhibiting different types of fertilisation. Explain.Ans: In Hens internal fertilisation takes place. The fertilised egg develops inside the female body but the development of chick from the embryo takes place outside the body.

On the other hand in frogs both fertilisation and development of zygote to an embryo and young ones occurs outside the body. 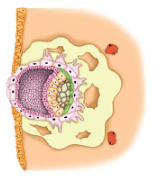 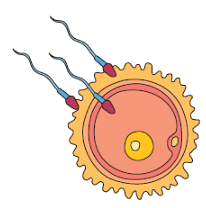 The document NCERT Exemplar Solutions: Reproduction in Animals Notes | Study Science Class 8 - Class 8 is a part of the Class 8 Course Science Class 8.
All you need of Class 8 at this link: Class 8
Join Course