The document NCERT Exemplar Solutions: Some Natural Phenomena Class 8 Notes | EduRev is a part of the Class 8 Course Science Class 8.
All you need of Class 8 at this link: Class 8

Q.1. An electroscope is a device which is used to find if an object is(a) charged(b) magnetic(c) free of cracks(d) hotAns: aSolution: An electroscope is a device which is used to find whether the object is charged or not. It consists of two metallic strips which are closely placed.Q.2. Electric current is to be passed from one body to another. For this purpose, the two bodies must be joined by(a) cotton thread(b) plastic string(c) copper wire(d) rubber bandAns: cSolution: Copper is a good conductor of electricity. Plastic, rubber and cotton are bad conductors of electricity.Q.3. The movement of the earth’s plates causes(a) cyclones(b) lightning(c) earthquakes(d) thunderstormsAns: cSolution: When earth’s plates brush past one another it leads to earthquakes. Earth can cause damages to buildings and dams.Q.4. Two charged objects are brought close to each other. Choose the most appropriate statement from the following options:(a) they may attract(b) they may repel(c) they may attract or repel depending on the type of charges they carry(d) there will be no effectAns: cSolution: If the charges are like charges they repel each other and if the charges are unlike charges they attract each other.Q.5. Which of the following is not likely to cause Tsunami?(a) A major nuclear explosion undersea(b) Earthquake(c) Volcanic eruption(d) LightningAns: dSolution: Tsunami is caused due to disturbance caused deep down the sea. Lightening will not cause any disturbance for the sea whereas earthquake, A major nuclear explosion undersea and Volcanic eruption can cause a disturbance in the sea.Q.6. The earth’s plate responsible for causing earthquakes is(a) the crust of the earth(b) the mantle of the earth(c) the inner core of the earth(d) the outer core of the earthAns: aSolution: Sudden trembling or shaking of the earth due to disturbance deep down its top layer called the crust.Q.7. Consider the list of terms given below:(i) Seismic Zone(ii) Fault Zone(iii) Mantle(iv) Inner CoreThe boundaries of the earth’s plate are known as(a) (i) & (ii)(b) (i) & (iii)(c) (iii) & (iv)(d) (ii), (iii) & (iv)Ans: aSolution: An earthquake is a sudden shaking or trembling of the earth which lasts for a very short time. Earthquakes are caused due to the movement of plates. Boundaries of the plates are weak zones where earthquakes are most likely to occur.Q.8. The outermost layer of earth is called(a) mantle(b) outer core(c) crust(d) inner coreAns: cSolution: Earths top layer is called crust which is followed by mantle, outer core and inner core.Q.9. Major earthquakes are less likely to occur in(a) North East India(b) Rajasthan(c) Rann of Kutch(d) OrissaAns: dSolution: Major earthquakes are less likely to occur in Orissa. The most threatened areas in India are Kashmir, Western and Central Himalayas, the whole of North-East, Rann of Kutch, Rajasthan and Indo-Gangetic Plain.Q.10. Consider the list of terms given below(i) Tsunami(ii) Landslide(iii) Floods(iv) LightningEarthquakes can cause(a) (i), (ii) & (iii)(b) (ii) & (iv)(c) (ii), (iii) & (iv)(d) (iii) & (iv)Ans: a

Q.11. State whether the following are True or False.(a) Earthquakes occur all the time all over the world.

Ans: True(b) The plates of the outermost layer of the earth are always in continuous motion.Ans: True(c) Tremors on the earth can also be caused by the eruption of a volcano.Ans: True(d) The process of electric discharge cannot occur between clouds and the earth.Ans: False- The process of electric discharge occurs between clouds and the earth.(e) Bathing outdoors should be avoided during a thunderstorm.Ans: TrueQ.12. Is it possible to predict the occurrence of an earthquake?Ans: No, it is not possible to predict the occurrence of an earthquake.Q.13. If a charged plastic straw is brought near another uncharged plastic straw, what will happen?Ans: Plastic straws will attract each otherQ.14. The aluminium strips in an electroscope as shown in fig. 15.1 are replaced by plastic strips and a charged body is brought in contact with the metal clip. What will happen? 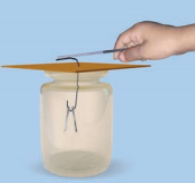 Ans: Divergence of strips will not take placeQ.15. Plastic straws A and B are rubbed with a dry cotton cloth. What will happen if they are brought near each other?Ans: They will repel each other. 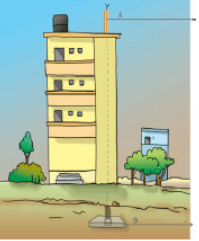 Ans: A is the lightning conductor and B is the copper plate.Q.19. If the materials used for constructing a building were good conductors, do you think lightning will strike the building? Will the lightning conductor be still required to be installed in the building?Ans: No installing conductor is not required if the materials used for constructing a building were good conductors.Q.20. You might have observed on a dry day that when you touch the screen of a television or computer monitor (with a picture tube), you get a slight shock. Why does it happen?Ans: The electric charge gets accumulated on the screen. On touching the screen the charge discharges through our body. Thus, we get a slight shock.Q.21. Explain how does lightning conductor protect a building from getting struck by lightning.Ans: Lightning conductor conducts the charge to the earth hence charge will not accumulate on the build. This protects the building from getting struck by lightning.Q.22. In an electroscope, if a negatively charged body is brought in contact with the metal clip, the strips of the electroscope diverge. If now another charged object carrying an equal amount of positive charge is brought in contact with the clip, what will happen?Ans: If the clip of the electroscopic gets contact with the positively charged object then negatively charged provided earlier will get neutralised and the strips will collapse.Q.23. The strips of an electroscope diverge when a charged body is brought in contact with the metal clip. Now the clip is touched gently by our hand. What will happen to the strips? Explain.Ans: If we touch strips of electroscope by our hand charge in the electroscope strips will get discharged through our hand and strips will come back to the original state.

Q.24. Explain how lightning takes place?Ans: During the development of a thunderstorm, the air currents move upwards while the water droplets move downwards. These vigorous movements of air currents cause separation of charges. The positive charges collect near the upper edges of the clouds and the negative charges accumulate near the lower edges. There is an accumulation of positive charges near the ground also. When the magnitude of the accumulated charges become large, the air cannot resist their flow. As a result, negative and positive charges meet producing a streak of bright light and sound, called lightning.Q.25. Mention three precautions that you will take to protect yourself if an earthquake strikes when you are inside the house.Ans: