The document NCERT Exemplar Solutions: Stars and the Solar System Class 8 Notes | EduRev is a part of the Class 8 Course Science Class 8.
All you need of Class 8 at this link: Class 8
Multiple Choice Questions

Q.1. Morning star is the name given to(a) pole star(b) star Sirius(c) planet Jupiter(d) planet VenusAns: dSolution: Planet Venus is dazzling than any other stars and it is visible in the eastern sky before sunrise.Q.2. Which of the following figures depicts the position of pole star correctly? 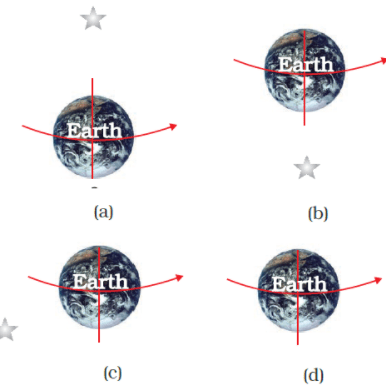 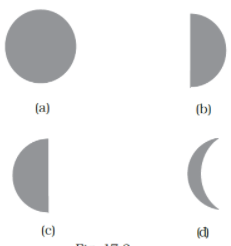 Ans: aSolution: After 15 days of new moon day it will be full moon day hence we can see the full moon as shown in option a)

Q.8. Do stars emit light only during night?Ans: Stars emit light always, but cannot see them in the day because of the excessive brightness of the sun.Q.9. Paheli and Boojho observe a bright object in the night sky which was not twinkling. Paheli says, it is a star and Boojho says it is a planet. Who is correct?Ans: Boojho is right because only planets cannot twinkle whereas stars emit light from a far distance and they twinkle.Q.10. State whether the following statements are ‘True’ or ‘False’.(a) The planet nearest to us is Jupiter.(b) All the stars are at the same distance from us.(c) The planets do not emit light of their own.(d) The planets keep changing their position with respect to stars.(e) The planet Venus appears in the eastern sky before sunrise.(f) The plane in which the earth revolves around the sun is called the equatorial plane of earth.Ans: a. False – Mars and venus are the nearest planets to earthb. False- Different stars are at distance from usc. Trued. Truee. Truef. False- Earth revolves around the sun in the orbital planeQ.11. John saw the full moon on a particular day. After how many days will he be able to see the full moon again?Ans: Approximately 29 daysQ.12. In the picture of rotating earth given as Fig. 17.3 mark the position of the pole star. 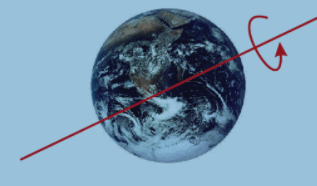 Q.13. In the given Fig. 17.4 out of the positions A, B, C and D which will indicate the position of the sun? Draw the sun at the appropriate position. 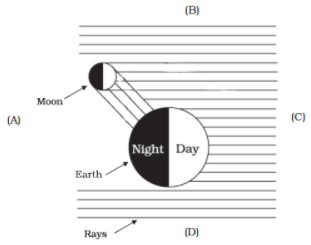 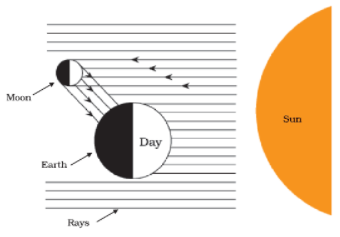 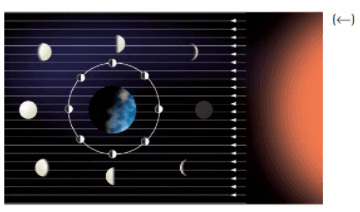 Q.15. A star is ten light-years away from the earth. Suppose it brightens up suddenly today. After how much time shall we see this change?Ans: We will see the change after 10 years.Q.16. Meteors are not visible during the daytime. Explain the reason.Ans: Meteors are not visible during the daytime because the brightness of a meteor is extremely small compared to that of the sun.Q.17. Why does the moon change its shape daily?Ans: We see only that part of the moon from which the light of the sun is reflected towards us. Hence the moon changes its shape daily.Q.18. Paheli saw the moon through a glass window at 8:00 p.m. She marked the position of the moon on the glass pane. She got up at 4 a.m. in the morning. Will the moon be visible at the same position?Ans: No, Because the position of the moon keeps changing during night.

Q.19. Suppose the moon emits light of its own. Would it still have phases? Justify your answerAns: As the moon does not emit its own light and reflects the light of the sun. phases are seen. Because of the revolution of earth, reflection of different intensities of light fall on the moon. Because of this moon glows continuously forming phases.Q.20. Fig. 17.6 shows comets without their tail. Show the tails of the comets at position A, B, and C. In which position will the tail be longest? 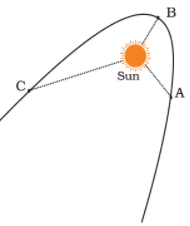 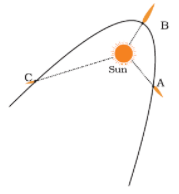 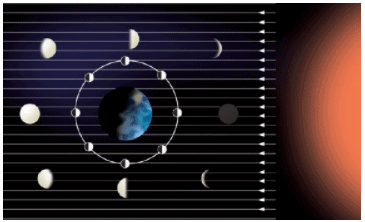 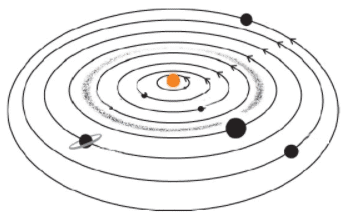 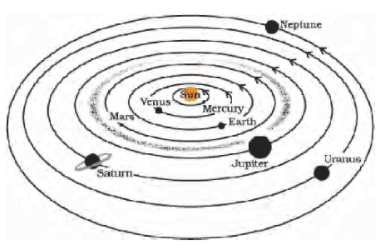 Q.24. Suppose the distance between earth and sun becomes half of its present distance. What is likely to happen to life?Ans: Life may no longer exist because some special environmental conditions are needed for the existence and continuation of life on the earth. The right distance of the earth from the Sun is necessary so that it has the right temperature range, the presence of water and a suitable atmosphere and a blanket of ozone.Q.25. Explain with a diagram of how you can locate pole star with the help of the constellation Great Bear (Ursa Major).Ans: Locate the two end stars of Ursa Major. Imagine a straight line passing through these stars as shown in the figure below. Extend this imaginary line towards the north direction. This line will lead to a star which is not too bright. This is a pole star. 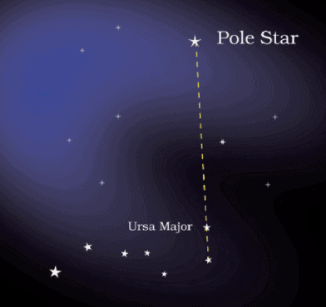