The document NCERT Exemplar - Thermal Properties Of Matter Notes | EduRev is a part of the NEET Course Physics For JEE.
All you need of NEET at this link: NEET

Q.1. A bimetallic strip is made of aluminium and steel (αAl >αsteel). On heating, the strip will(a) Remain straight.(b) Get twisted.(c) Will bend with aluminium on concave side.(d) Will bend with steel on concave side.Ans. (d)Solution.Bi-metallic strip: Two strips of equal lengths but of different materials (different coefficient of linear expansion) when join together, it is called “bi-metallic strip”, and can be used in thermostat to break or make electrical contact. This strip has the characteristic property of bending on heating due to unequal linear expansion of the two metal. The strip will bend with metal of greater a on outer side, i.e. convex side. 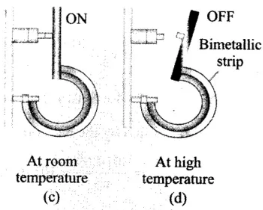 On heating, the metallic strip with higher coefficient of linear expansion (∝Al) will expand more.According to the question, ∝AI > ∝steel, so aluminum will expand more. So, it should have larger radius of curvature. Hence, aluminium will be on convex side. The metal of smaller ∝ (i.e., steel) bends on inner side, i.e., concave side. 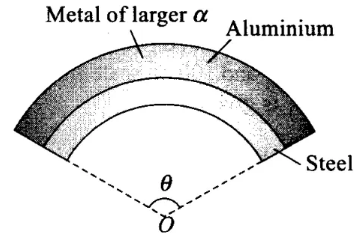 Moment of inertia of a uniform rod about its perpendicular bisector,

⇒ ω' < ωSo, angular velocity (speed of rotation) decreases.Q.3. The graph between two temperature scales A and B is shown in Figure. Between upper fixed point and lower fixed point there are 150 equal division on scale A and 100 on scale B.The relationship for conversion between the two scales is given by at temperature θ0 and Which of the following is correct?(a) The region AB represents ice and water in thermal equilibrium.(b) At B water starts boiling.(c) At C all the water gets converted into steam.(d) C to D represents water and steam in equilibrium at boiling point.Ans. (a, d)Solution.During phase change process, temperature of the system remains constant.(a) In region AB, a phase change takes place, heat is supplied and ice melts but temperature of the system is 0°C. it remains constant during process. The heat supplied is used to break bonding between molecules.(b) In region CD, again a phase change takes place from a liquid to a vapour state during which temperature remains constant. It shows water and steam are in equilibrium at boiling point.Q.12. A glass full of hot milk is poured on the table. It begins to cool gradually. Which of the following is correct?(a) The rate of cooling is constant till milk attains the temperature of the surrounding.(b) The temperature of milk falls off exponentially with time .(c) While cooling, there is a flow of heat from milk to the surrounding as well as from surrounding to the milk but the net flow of heat is from milk to the surrounding and that is why it cools.(d) All three phenomenon, conduction, convection and radiation are responsible for the loss of heat from milk to the surroundings.Ans. (b, c, d)Solution.When hot milk spread on the table heat is transferred to the surroundings by conduction, convection and radiation. Because the surface area of poured milk on a table is more than the surface area of milk filled in a glass. Hence, its temperature falls off exponentially according to Newton’s law of cooling. Heat also will be transferred from surroundings to the milk but will be lesser than that of transferred from milk to the surroundings. So, option (b), (c) and (d) are correct.

But for a perfectly black body ablack = 1, so

If emissive and absorptive powers are considered for a particular wavelength λ,

Now since (Eλ)Black  is constant at a given temperature, according to this law if a surface is a good absorber of a particular wavelength it is also a good emitter of that wavelength.This in turn implies that a good absorber is a good emitter (or radiator).The conductivities of metals are very high compared to wood. Due to difference in conductivity, if one touch the hot metal with a finger, heat from the surrounding flows faster to the finger from metals and so one feels the heat.Similarly, when one touches a cold metal the heat from the finger flows away to the surroundings faster. So we can say that a good radiator can be a good absorber.Q.4. Calculate the temperature which has same numeral value on celsius and Fahrenheit scale.Ans. To construct a scale of temperature, two fixed points are taken. First fixed point is the freezing point of water, it is called lower fixed point. The second fixed point is the boiling point of water, it is called upper fixed point. Temperature on one scale can be converted into other scale by using the following identity.

Constant for all scales

Let T be the value of temperature having same value of Celsius and Fahrenheit scale, i.e. F = C = T

⇒mT = -40°C = -40°FQ.5. These days people use steel utensils with copper bottom. This is supposed to be good for uniform heating of food. Explain this effect using the fact that copper is the better conductor.Ans. As the copper has higher conductivity and low specific heat as compares of steel. So copper base transfer heat quickly to food from bottom and also need low quantity of heat due to lower specific heat as compared to steel.So copper base supply quick and larger heat from burner to  food in utensil.

Increase in length of the rod when temperature is increased by Δt, is given byL' = L(1 + αΔT)∴ New moment of inertia of the rod

∴ As change in length Δl is very small, therefore neglecting (Δl)2(∵ α2(ΔT)2 is very small) we getI' = I[1 + 2αΔT]∴ Increase in moment of inertia= I' - I = I[1 + 2αΔT] - I = 2αIΔTQ.2. During summers in India, one of the common practice to keep cool is to make ice balls of crushed ice, dip it in flavoured sugar syrup and sip it. For this a stick is inserted into crushed ice and is squeezed in the palm to make it into the ball. Equivalently in winter, in those areas where it snows, people make snow balls and throw around. Explain the formation of ball out of crushed ice or snow in the light of P–T diagram of water.Ans. Refer to the P.T diagram of water and double headed arrow. Increasing pressure at 0°C and 1 atm takes ice into liquid state and decreasing pressure in liquid state at 0°C and 1 atm takes water to ice state. 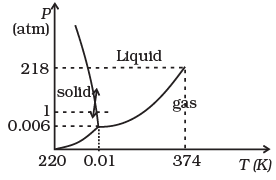 orAs small mass of ice is melted, thus the temperature of the resultant mixture will remain 0°C which contains 12.5 g of ice and 87.5 g of water.Q.4. One day in the morning, Ramesh filled up 1/3 bucket of hot water from geyser, to take bath. Remaining 2/3 was to be filled by cold water (at  room temperature) to bring mixture to a comfortable temperature. Suddenly Ramesh had to attend to something which would take some times, say 5-10 minutes before he could take bath. Now he had two options: (i) fill the remaining bucket completely by cold water and then attend to the work, (ii) first attend to the work and fill the remaining bucket just before taking bath. Which option do you think would have kept water warmer? Explain.Ans. The first option would have kept water warmer because according to Newton’s law of cooling, the rate of loss of heat is directly proportional to the difference of temperature of the body and the surrounding and in the first case the temperature difference is less, so rate of loss of heat will be less.

Q.1. We would like to prepare a scale whose length does not change with temperature. It is proposed to prepare a unit scale of this type whose length remains, say 10 cm. We can use a bimetallic strip made of brass and iron each of different length whose length (both components) would change in such a way that difference between their lengths remain constant. If αiron = 1.2 x 10-5/ K and αbrass = 1.8 x 10-5/K, what should we take as length of each strip?Ans. According to the problem, L1-Lb = 10 cm where,L1 = length of iron scaleLb = Length of brass scaleThis condition is possible if change in length both the rods is remain same at all temperatures.Change in length of iron rod,ΔL = α1L1ΔTChange in length of brass rod,ΔL = αBLBΔTAs the change will equal in both the rods, soα1L1ΔT = αBLBΔT⇒ Find x (displacement of the centre) if αsteel = 1.2 × 10-5/°C.Ans. Diagram shows the deformation of a railway track due to rise in temperature.

As increase in length ΔL is very small, therefore, neglecting (ΔL)2, we get