The document NCERT Exemplar - Waves (Part- 1) Notes | EduRev is a part of the JEE Course Physics Class 11.
All you need of JEE at this link: JEE 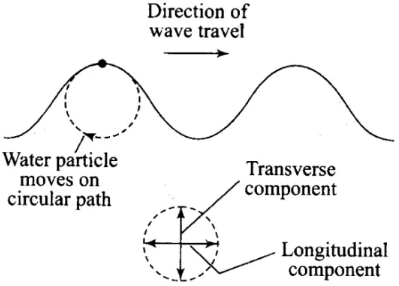 As the wave passes, water molecules at the crests move in the direction of the wave while those at the troughs move in the opposite direction.Q.2. Sound waves of wavelength λ travelling in a medium with a speed of v m/s enter into another medium where its speed is 2v m/s. Wavelength of sound waves in the second medium is(a) λ(b) λ/2(c) 2λ(d) λAns. (c)Solution.Frequency remains unchanged in both the medium.So,

λ1 and λ2 are wavelengths and v1 and v2 are speeds in first and second medium respectively.So,

where ρ is the density of air.⇒

Hence, speed of sound wave in air increases with increase in humidity.

Q.5. With propagation of longitudinal waves through a medium, the quantity transmitted is
(a) Matter
(b) Energy
(c) Energy and matter
(d) Energy, matter and momentum
Ans. (b)
Solution.
A wave is a disturbance which propagates energy and momentum from one place to the other without the transport of matter. In propagation of longitudinal waves through a medium leads to transmission of energy through the medium without matter being transmitted. There is no movement of matter (mass) and hence momentum.
Important point:
Characteristics of wave motion:

Q.7. A sound wave is passing through air column in the form of compression and rarefaction. In consecutive compressions and rarefactions,
(a) Density remains constant.
(b) Boyle’s law is obeyed.
(c) Bulk modulus of air oscillates.
(d) There is no transfer of heat.
Ans. (d)
Solution. 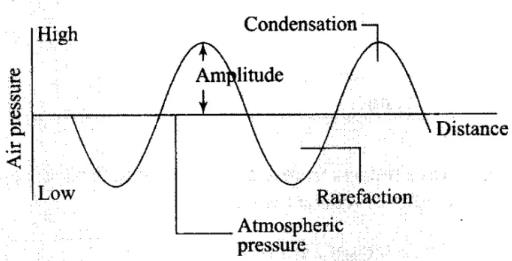 Q.9. A string of mass 2.5 kg is under a tension of 200 N. The length of the stretched string is 20.0 m. If the transverse jerk is struck at one end of the string, the disturbance will reach the other end in
(a) 1 second
(b) 0.5 second
(c) 2 seconds
(d) Data given is insufficient
Ans. (b)
Solution.
The speed of transverse wave in any string

Time taken by the disturbance to travel from one end to the other end of the string i.e., to travel a distance of 20m is

Q.10. A train whistling at constant frequency is moving towards a station at a constant speed V. The train goes past a stationary observer on the station. The frequency n of the sound as heard by the observer is plotted as a function of time t (Figure) . Identify the expected curve.
(a)

Ans. (c)
Solution.
General expression for Apparent Frequency. Suppose observer (O) and source (S) are moving in the same direction along a line with velocities v0 and vs respectively. Velocity of sound is v and velocity of medium is vm, then apparent frequency observed by observer is given

When train is approaching towards the observer.

It is clear that na > n0:
When the train is going away from the observer.

It is clear that na > no
Hence, the expected curve is (c). 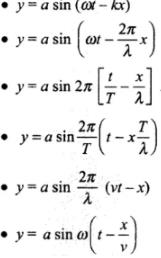 Hence it is correct.
Option (c): Frequency of the wave,

Hence it is wrong.

Q.12. The displacement of a string is given by y(x, t) = 0.06 sin(2πx/3) cos(120πt) where x and y are in m and t in sec. The length of the string is 1.5 m and its mass is 3.0 x 10-2 kg.
(a) It represents a progressive wave of frequency 60 Hz.
(b) It represents a stationary wave of frequency 60 Hz.
(c) It is the result of superposition of two waves of  wavelength 3 m, frequency 60 Hz each travelling with a speed of 180 m/s in opposite direction.
(d) Amplitude of this wave is constant.
Ans. (b, c)
Solution.
Standing Waves or Stationary Waves:
When two sets of progressive wave trains of same type (both longitudinal or both transverse) having the same amplitude and same time period/ frequency/wavelength travelling with same speed along the same straight line in opposite directions superimpose, a new set of waves are formed. These are called stationary waves or standing waves.
Suppose that the two superimposing waves are incident wave y1 = a sin(ωt - kx) and reflected wave y2 = a sin(ωt + kx).
(As y2 is the displacement due to a reflected wave from a free boundary).
Then by principle of superposition
y = y1 + y2 = a[sin(ωt - kx) + sin (ωt + kx)]
which gives the standard equation of stationary wave.
y(x, t) = 2a sin (kx) cos(ωt)
Given equation is

Q.14. During propagation of a plane progressive mechanical wave
(a) All the particles are vibrating in the same phase.
(b) Amplitude of all the particles is equal.
(c) Particles of the medium executes S.H.M.
(d) Wave velocity depends upon the nature of the medium
Ans. (b, c, d)
Solution.
Characteristics of wave motion: 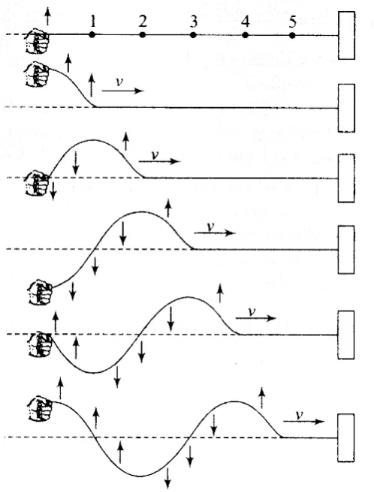 Option (a): Clearly, the particles 1, 2 and 3 are having different phase.
Option (b) and (c): Particles of the wave shown in the figure executes SHM with same amplitude.
Option (d): The wave velocity of mechanical wave depends only on elastic and inertia property of medium for a progressive wave propagating in a fluid. Hence wave velocity depends upon the nature of the medium.
Speed = v =

(n = number of loops)
For a given sonometer velocity of wave will be constant. If after changing the length of wire the tuning fork still be in resonance with the wire. Then, n/L = constant

Hence, when the wire is doubled the number of loops also get doubled to produce the resonance. That is it resonates in second harmonic.

Q.2. An organ pipe of length L open at both ends is found to vibrate in its first harmonic when sounded with a tuning fork of 480 Hz. What should be the length of a pipe closed at one end, so that it also vibrates in its first harmonic with the same tuning fork?
Ans. As, the medium and frequency and number of harmonic in open and closed pipes are same, so number of nodes and (wave), in both cases will be same. 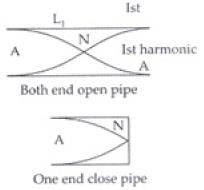 In both end open pipe

In one end open pipe

or 4L2 = 2L1 or L2 = L1/2
So the length of one end closed pipe will be half of both end open pipe for resonant Ist harmonic with same frequency.

Q.3. A tuning fork A, marked 512 Hz, produces 5 beats per second, where sounded with another unmarked tuning fork B. If B is loaded with wax the number of beats is again 5 per second. What is the frequency of the tuning fork B when not loaded?
Ans. vA = 512, ∵ v0 = vA ∼ vB no. of frequency of beats
As on loading frequencies of B decreased
So in first case v1 = 5

When B is loads frequency of B is v
∴

or f ∝ 1/r
Hence, when radius is tripled, the frequency will be 1/3 rd of previous value.

Q.5. A sitar wire is replaced by another wire of same length and material but of three times the earlier radius. If the tension in the wire remains the same, by what factor will the frequency change?
Ans. The wire is stretched both end so frequency of stretched wire is

As number of harmonic n, length L and tension (T) are kept same in both cases.

So the frequency of sitar reduced by 1/2 of previous value.

But it is given,

This time period will be equal to the time interval between successive maxima.