It means third harmonic node of the pipe is resonantly excited by the source of given frequency.Q.3. A train standing at the outer signal of a railway station blows a whistle of frequency 400 Hz still air. The train begins to move with a speed of 10 m s-1 towards the platform. What is the frequency of the sound for an observer standing on the platform? (sound velocity in air = 330 m s-1)Ans. v0 = 400 Hzvz = 10 m/sVelocity of sound in air va = 330 m/sApparent frequency by observer standing on platform

Q.4. The wave pattern on a stretched string is shown in Figure Interpret what kind of wave this is and find its wavelength. 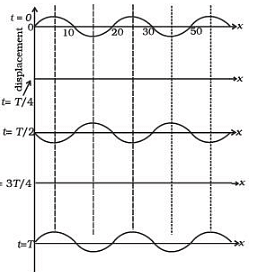 Ans. If we observe the graph there are some points on the graph which are always at rest. The points on positions x = 10,20,30,40 never move, always at mean position with respect to time. These are forming nodes which characterize a stationary wave.We know the distance between two successive nodes is equal to λ/2 ⇒ λ = 2 x (node to node distance)= 2 x (20 - 10) = 20 cm Q.5. The pattern of standing waves formed on a stretched string at two instants of time are shown in Figure. The velocity of two waves superimposing to form stationary waves is 360 ms-1 and their frequencies are 256 Hz.

(b) Point does not vibrate i.e., their displacement is zero always so nodes are at A, B, C, D and E. The point A’ and C’ are at maximum displacement so there are anti-nodes at A’ and C’.Between A and C =

Q.6. A tuning fork vibrating with a frequency of 512 Hz is kept close to the open end of a tube filled with water. The water level in the tube is gradually lowered. When the water level is 17 cm below the open end, maximum intensity of sound is heard. If the room temperature is 20° C, calculate 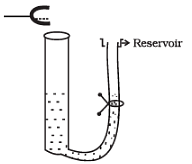 (a) speed of sound in air at room temperature(b) speed of sound in air at 0° C(c) if the water in the tube is replaced with mercury, will there be any difference in your observations?Ans. If a pipe partially filled with water whose upper surface of the water acts as a reflecting surface of a closed organ pipe. If the length of the air column is varied until its natural frequency equals the frequency of the fork, then the column resonates and emits a loud note.The frequency of tuning fork, f= 512 Hz.For observation of first maxima of intensity, 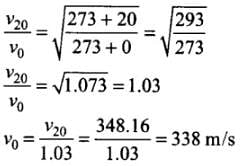 (c) The resonance will still be observed for 17 cm length of air column above mercury. However, due to more complete reflection of sound waves at mercury surface, the intensity of reflected sound increases.Q.7. Show that when a string fixed at its two ends vibrates in 1 loop, 2 loops, 3 loops and 4 loops, the frequencies are in the ratio 1 : 2 : 3 : 4.Ans. Let n be the number of loops in the string.The length of each loop is λ/2

For maximum velocity of particle is at its mean position 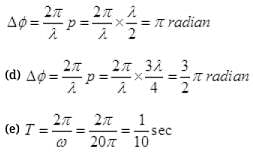 The document NCERT Exemplar: Waves - 2 - Notes | Study Physics Class 11 - NEET is a part of the NEET Course Physics Class 11.
All you need of NEET at this link: NEET
Attempt Now
Join Course