The document NCERT Exemplar Notes - Class 11 is a part of Class 11 category.
All you need of Class 11 at this link: Class 11

Q.1. Two students performed the same experiment separately and each one of them recorded two readings of mass which are given below. Correct reading of mass is 3.0 g. On the basis of given data, mark the correct option out of the following statements.

Q.22. One of the statements of Dalton’s atomic theory is given below: “Compounds are formed when atoms of different elements combine in a fixed ratio” Which of the following laws is not related to this statement? (1) Law of conservation of mass (2) Law of definite proportions (3) Law of multiple proportions (4) Avogadro law Ans. (1, 4)Solution.Law of conservation of mass states that matter can neither be created nor destroyed. Avogadro proposed that equal volumes of gases at the same temperature and pressure should contain equal number of molecules.

(All reactants and products have simple ratio 1 : 1 : 2)Q.29. If two elements can combine to form more than one compound, the masses of one element that combine with a fixed mass of the other element, are in whole number ratio. (a) Is this statement true? (b) If yes, according to which law? (c) Give one example related to this law Ans. (a) Yes, the given statement is true.(b) According to the Law of multiple proportions(c) For example; carbon combines with oxygen to form two compounds CO andCO2.Masses of oxygen, which combine with a fixed mass of carbon (12 g) bear a simple ratio i.e., 16 : 32 or 1 : 2Q.30. Calculate the average atomic mass of hydrogen using the following data: 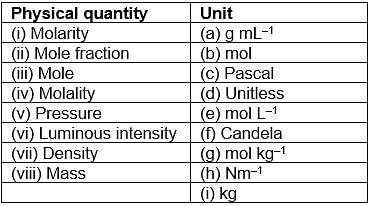 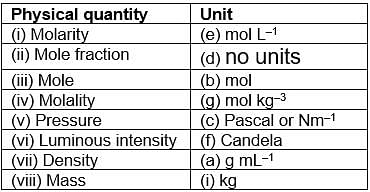 Hence, for the reaction of 10 mol of CaCO3(s) number of moles of HCl required would be :