The document NCERT Exemplars - Semiconductor Electronics (Part - 1) Notes | EduRev is a part of the JEE Course NEET Revision Notes.
All you need of JEE at this link: JEE

mobility of electron and

mobility of holes(4) Motion of electrons in the conduction band and of holes in the valence band under the action o f electric field is shown below: (5) At absolute zero temperature (0 K)conduction band of semiconductor is completely empty, i.e., σ= 0. Hence the semiconductor behaves as an insulator.We know that

A symbol of the diode is represented like this:In this problem first we have to check the polarity of the diodes. - 10 V is the lower, voltage in the circuit. Now p-side of p-n junction D1, is connected to lower voltage and n-side of D1 to higher voltage. Thus D1 is reverse biased.Now, let us analyse 2nd diode of the given circuit. The p-side of p-n junction D2 is at higher potential and n-side of D2 is at lower potential. Therefore D2 is forward biased.Hence, current flows through the junction from B to A.Q.4. A 220 V A.C. supply is connected between points A and B (in Figure). What will be the potential difference V across the capacitor? 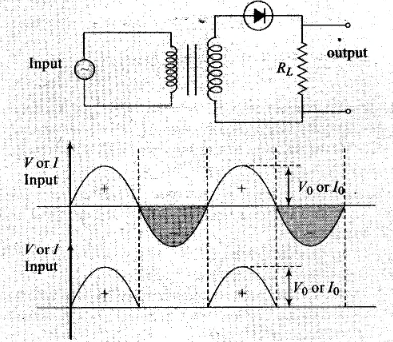 As p-n junction diode will conduct during positive half cycle only, during negative half cycle diode is reverse biased. During this diode will not give any output. So, potential difference across capacitor C - peak voltage of the given AC voltage= V0 = Vrms√2 = 220√2 V

Q.5. Hole is
(a) An anti-particle of electron
(b) A vacancy created when an electron leaves a covalent bond
(c) Absence of free electrons
(d) An artifically created particle
Ans. (b)
Solution.
Concept of holes in the semiconductor:

Q.6.The output of the given circuit in Figure

Q. 7. In the circuit shown in Figure, if the diode forward voltage drop is 0.3 V, the voltage difference between A and B is

Q.8. Truth table for the given circuit (Figure) is So electrons move from emitter to collector through base i.e., emitter to base verifies (a) and (c).

Q.11 Figure shows the transfer characteristics of a base biased CE transistor. Which of the following statements are true?

Q.13. In the depletion region of a diode
(a) there are no mobile charges
(b) equal number of holes and electrons exist, making the region neutral
(c) recombination of holes and electrons has taken place
(d) immobile charged ions exist
Ans. (a,b,d)
Solution.
On account of difference in concentration of charge carrier in the two sections of P-N junction, the electrons from N-rcgion diffuse through the junction into P-region and the hole from P-region diffuse into N-region. Q.14. What happens during regulation action of a Zener diode?
(a) The current in and voltage across the Zenor remains fixed
(b) The current through the series Resistance (Rs) changes
(c) The Zener resistance is constant
(d) The resistance offered by the Zener changes
Ans. (b, d)
Solution.
Symbolically zener diode represents like this:
In the forward bias, the zener diode acts as an ordinary diode. It can be used as a voltage regulator.

Zener Diode as a voltage regulatorA zener diode when reverse biases offers constant voltage drop across in terminals as unregulated voltage is applied across circuit to regulate. Then during regulation action of a Zener diode, the current through the series resistance Rs changes and resistance offered by the Zener changes. The current through the Zener changes but the voltage across the Zener remains constant.

Q.15. To reduce the ripples in a rectifier circuit with capacitor filter
(a) RL should be increased
(b) Input frequency should be decreased
(c) Input frequency should be increased
(d) Capacitors with high capacitance should be used
Ans. (a,c,d)
Solution.
Ripple factor may be defined as the ratio of r.m.s. value of the ripple voltage to the absolute value of the DC component of the output voltage, usually expressed as a percentage. However ripple voltage is also commonly expressed as the peak-to-peak value. Ripple factor (r) of a full wave rectifier using capacitor filter is given by

Where, L is inductance of the coil and ω is the angular frequency.
or Ripple factor  can also  be given by (i) In reverse biasing width of depletion layer increases

(iii) Reverse bias supports the potential barrier and no current flows across the junction due to the diffusion of the majority carriers.

(iv) Break down voltage: Reverse voltage at which break down of semiconductor occurs. For Ge it is 25 V and for Si it is 35 V.

So, we conclude that in reverse biasing, ionization takes place because the minority charge carriers will be accelerated due to reverse biasing and striking with atoms which in turn cause secondary electrons and thus more number of charge carriers.
When doping concentration is large, there will be a large number of ions in the depletion region, which will give rise to a strong electric field.